Tag Archives: Tips and Tricks in Studio One 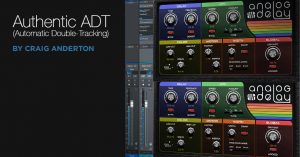 Double-tracking is the process of recording the same part a second time, and trying to duplicate the original part as closely as possible. The goal is to make a part sound bigger, more prominent, or (with mono instruments), create a stereo image from the two tracks.

Spoiler alert: humans aren’t perfect. When playing the second part, there will be slight timing, and perhaps pitch, variations. Within reason, these variations are good, because they keep the part from sounding like the original part was just copied to another track. However, sometimes it’s difficult to play a second part that’s tight enough, especially with something like a complex or fast lead guitar part. The usual solution is to do electronic doubling using an effect, like Studio One’s Chorus/Doubler.

However (at least to my ears), electronic doubling has never sounded quite the same as actually double-tracking a part. So here’s a different approach that I find more satisfying, and closer to “the real thing.” It requires copying the original track, processing it as described in this tip to create the doubled sound, then mixing the processed track with the original track. The audio example plays the original track, then the doubled version using this technique.

I wasn’t planning to do an effects chain, because the Analog Delay settings in Fig. 1 are pretty foolproof. In fact, unless you want to explore the options brought out to the control panel, just insert the FX Chain, and carry on with your mixing or recording. 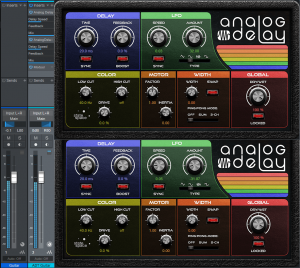 To give a more randomized effect, there are two delays (delayed sound only) in series, set for the same initial delay time, but modulated at different LFO rates. So the longest, and shortest, delays happen only when the maximum deviations of the two LFOs coincide. Otherwise, the delay changes constantly, in a somewhat non-periodic way.

But the “secret sauce” is using this on a track dedicated solely to producing the ADT effect. One of the problems with electronic ADT is that the variations can never be ahead of the original, or at the same time—they can only lag. Real double-tracking doesn’t work that way. Sometimes the player will hit a little ahead, sometimes a little behind, and sometimes right on the beat.

Fig. 2 shows the Macro controls panel. These parameters have been constrained to what I find to be useful settings.

The maximum delay is 25 ms because remember, there are two delays in series so this can go as high as 50 ms. If this amount of delay happened all the time it would be perceived more like slapback echo, but happening on occasion adds to the realism.

Depth and Rate are to taste. I generally adjust them to give a minimal flanging effect in case the original and doubled tracks end up being summed to mono at some point. However, that’s a worse-case scenario. This technique is designed for a cool stereo effect, with the original and ADT tracks panned oppositely (not necessarily full left and right, just oppositely).

Mod Shape affects only one of the delays, but is interesting. A sawtooth shape, with the other delay being modulated by a sine wave, may give good results if the audio isn’t too continuous. Square can be useful with very low Width settings, but you’ll probably get more use out of sine or triangle wave modulation.

Tags: Tips and Tricks in Studio One

The Studio One Cover-Up 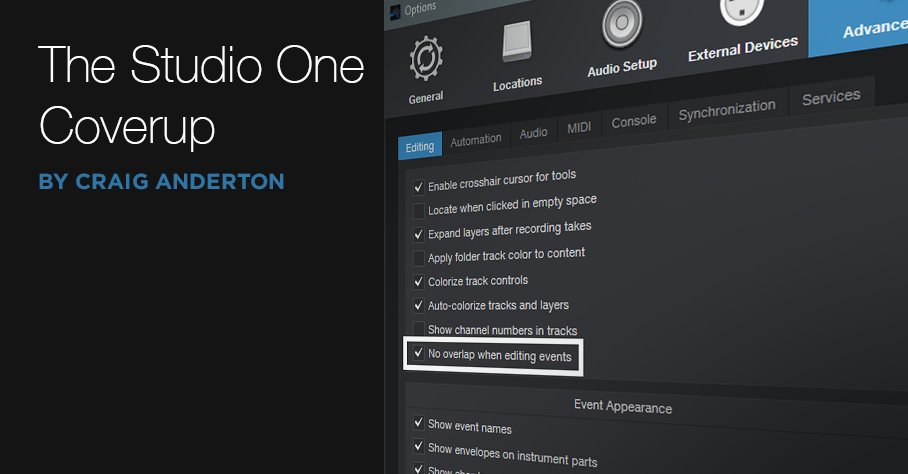 Studio One 5 has many little features that might fly under the radar, but are surprisingly useful.

Like being able to change what happens when one Event overlaps (covers over) a different Event.

Prior to Version 5, overlapped Events were treated the same. The overlapping Event became translucent, so you could see the waveform or note data of the Event underneath it. This is ideal for making audio crossfades, which is one of the main reasons for overlapping audio Events. To create a crossfade, type X, and optionally, click and drag up/down at the crossfade junction to shape the crossfade curve. Then you can shift+click on the overlapped Event, type ctrl+B, and combine them into a single Event. With note data, overlapping Events is helpful when combining, for example, the main snare hits on one track with alternate snare hits on a different track.

Some programs default to deleting, not just covering over, a section that’s being overlapped by another clip. This is useful when you’re doing lots of edits, because you’re not left with vestigial pieces of regions that still exist, but don’t do anything. To accommodate this type of workflow, Studio One 5 now offers a “no overlap” mode for Events. There are three ways to access this (Fig. 1). 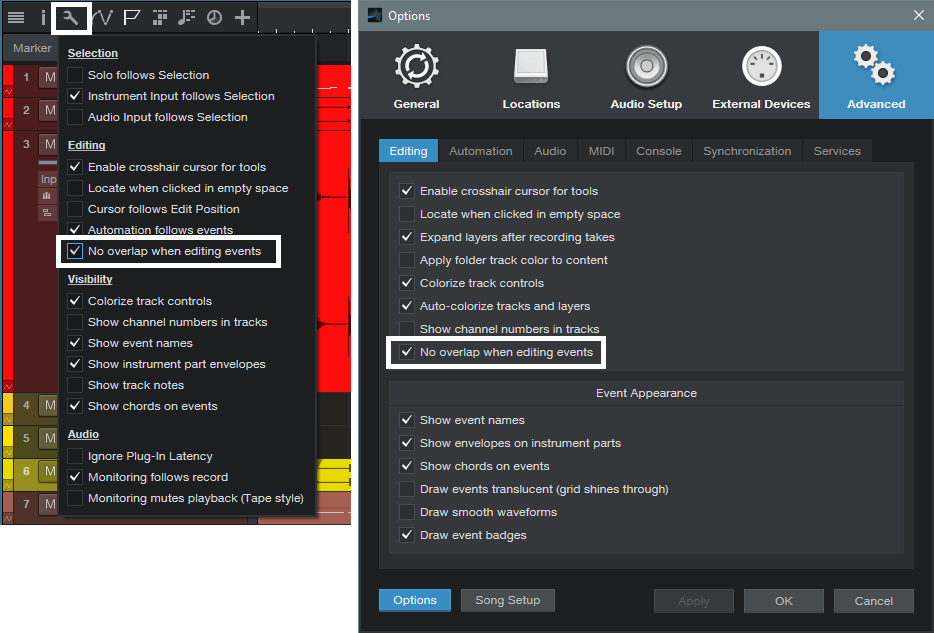 Figure 1: In addition to using a keyboard shortcut, Studio One can default to “No overlap when editing events,” as chosen in the Arranger view or under Options.

Selecting “No overlap when editing events” deletes the overlapped part of an Event, and the replaced section looks like it’s part of the track (i.e., not grayed). However, if you later decide you didn’t really want to delete the overlapped region, then just remove the section that overlapped it. Now you can slip-edit the edge of the underlying Event back to where it was.

(Note that if you enabled Play Overlaps in a track’s Inspector, or chose “Enable Play Overdubs for New Audio Tracks” in Options/Advanced/Audio, so that you could overdub over an existing track and hear both the original track and the overdub on playback, enabling “No overlap when editing events” overrides this setting.)

Granted, this may seem like a small change, but it accommodates more workflow possibilities—especially if you learn the keyboard shortcut, and choose the right option at the right time.

Comments Off on The Studio One Cover-Up