The July 4th weekend is approaching, so it’s time to hit the beach—but you can’t have surfing without surf music, right? So before you start scouting for the impact zone, grab your guitar, import the epic downloadable Ampire preset, and play your guitar until you have noodle arms. Surf’s up!

It starts with the guitar, and your playing technique. Ideally, your guitar will have single-coil pickups, a whammy bar, at least .010 gauge strings (preferably a little heavier), and a hard pick to go with the heavy strings. If your guitar doesn’t have single-coil pickups, no worries—check out the Pro EQ-based Friday tip from November 2018, Humbucker to Single-Coil Conversion with EQ.

As luck would have it, Ampire has exactly what we need (fig. 1). Surf music wants a clean amp (well, maybe just a hint of distortion), lots of treble, and spring reverb. Tremolo is optional. I also use a compressor before the amp, to bring up decaying strings after playing with the whammy bar.

Check out the audio example, I think it nails that mythical guitar sound. And just to be clear, this isn’t about cultural appropriation of surf music, nor is it a parody. This is a tribute—my high school band opened for the Ventures, and I still think the surf guitar sound represents a unique moment in time. Have fun!

Comments Off on Surf’s Up 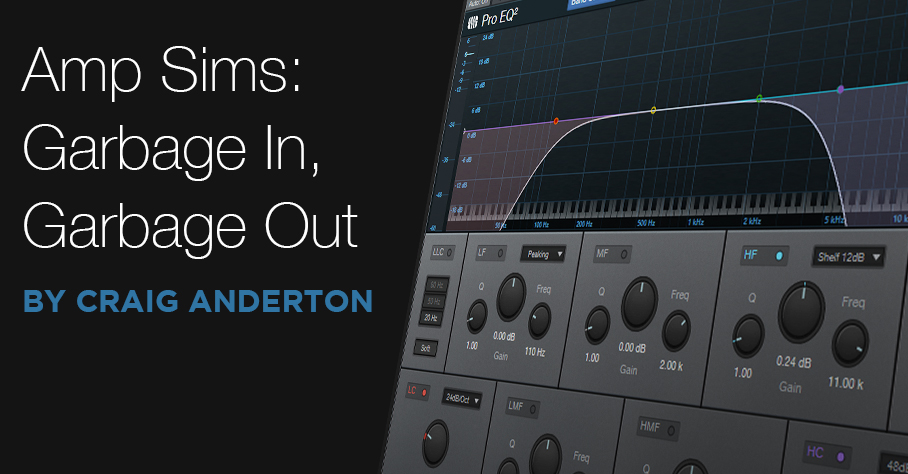 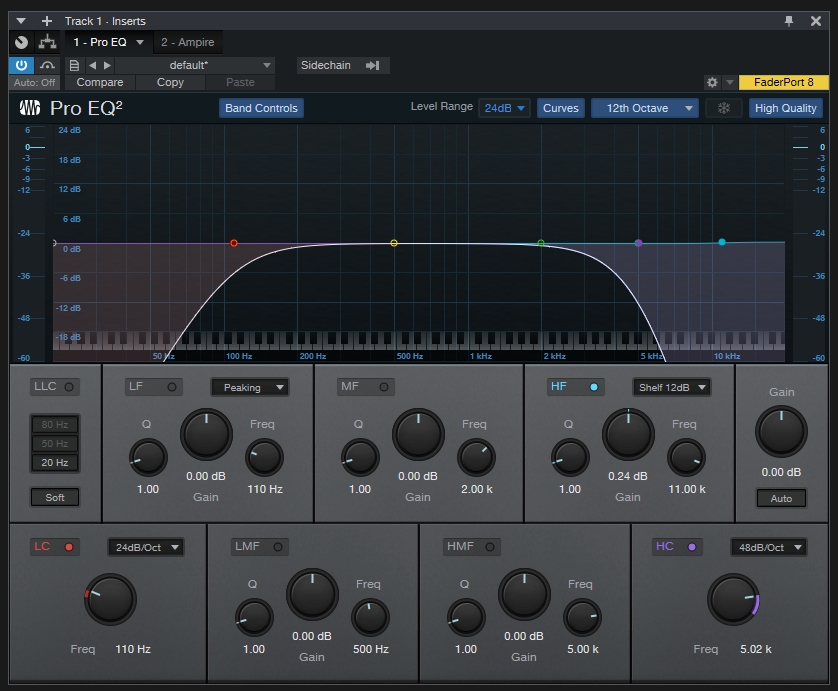 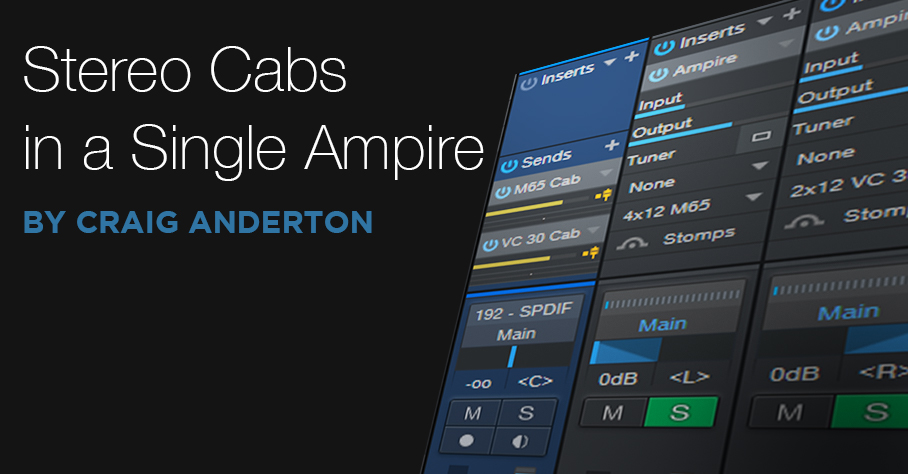 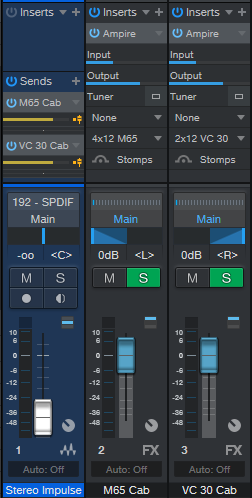 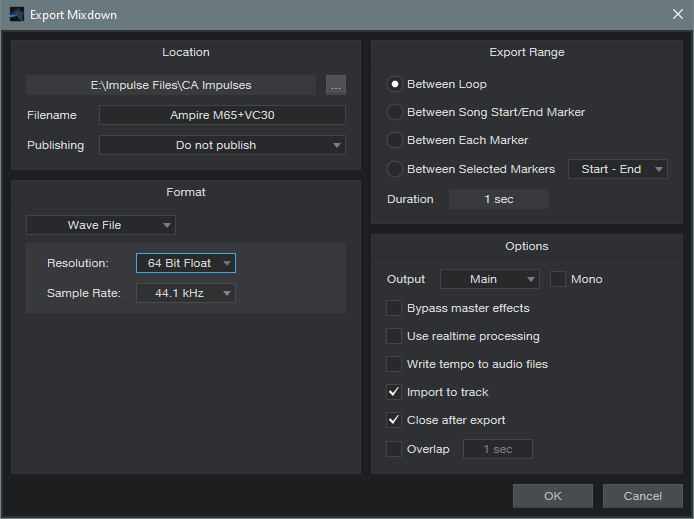 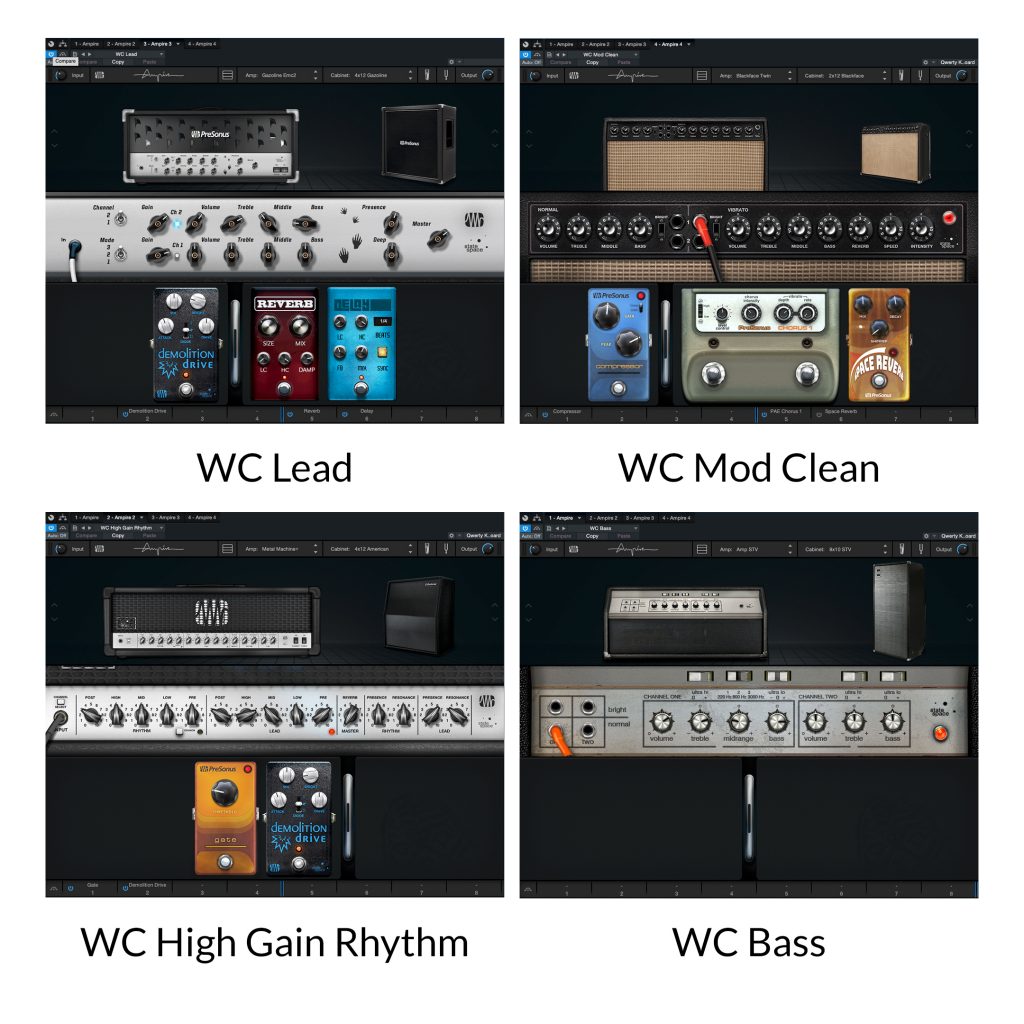 In conjunction with Studio One‘s Show Page, the pre-recorded backing tracks (drums/synthbass) and her live vocal and guitar audio signals can be professionally mixed and ready for livestreaming.

“LA/NY” is just one of many tracks from Outlier, her latest record. She discusses more about the production of Outlier below. 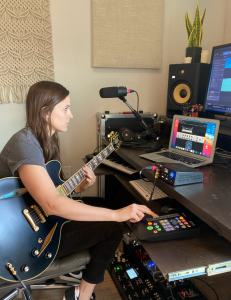 Tell us a bit more about “LA/NY”

“LA/NY” is a new song off my latest album, Outlier. It is a bit of a different direction for me, because I wanted to put forth a killer pop tune that also shined a light on my love of a fuzzy guitar solo.

Outlier is an album built on exquisite tension: like an endless push-and-pull between desire and resistance, determination and self-sabotage, the instinctive need to belong and the urge to strike out on your own. My songs were produced by Michael Shuman (Queens of the Stone Age and Mini Mansions) and it’s an album full of guitar-drenched sounds that’s wildly unpredictable and immediately magnetic.

It was all done within Studio One, using the PreSonus Ampire plug-in. Specifically, I used the Wild Drive, Demolition Drive, Equalizer and Delay pedals running into the Blackface Twin model amp paired with a 2×12 American Cabinet.

(NOTE: if you’re a PreSonus Sphere Member, you can download her exact Ampire Preset here)

How did you first discover PreSonus?

I first discovered PreSonus while working at a music shop in Austin, TX. They sold audio recording equipment from all different brands, but I noticed that PreSonus had the most intuitive software (Studio One Artist) included, as well as the best price point.

What was your first PreSonus product? 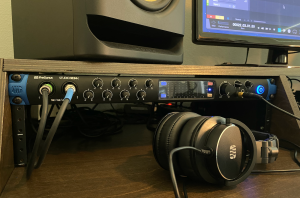 It was the Studio 1810c audio interface, but I have since upgraded to a Studio 1824c. I’ve got the FaderPort to the right of my computer keyboard. I also now have their Revelator io24 that you see me using in the video above, of course!

How long have you used Studio One?

What are your Top three favorite features about Studio One?

My favorite aspect of Studio One is how easy it is to use. The drag & drop aspect helps me work really quickly and efficiently. I also really love using Impact for drum sounds, Presence for sample-based instrument sounds, the Mai Tai polyphonic synthesizer, and Ampire for pedal FX and amp modeling. 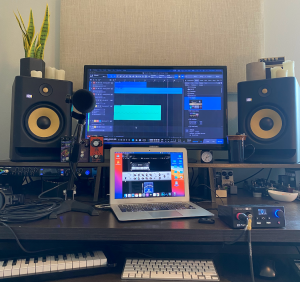 We’re so stoked to welcome Emily into the family as a Featured Artist on PreSonus Sphere!

She is sharing eight of her custom Ampire Presets, along with a custom Vocal Preset and a Mai Tai synthesizer patch for all PreSonus Sphere members to access and enjoy. 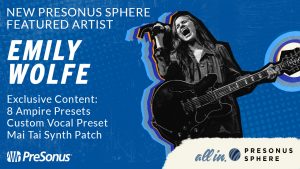 Join PreSonus Sphere today to check out Emily Wolfe’s exclusive Presets and from those by other featured artists! 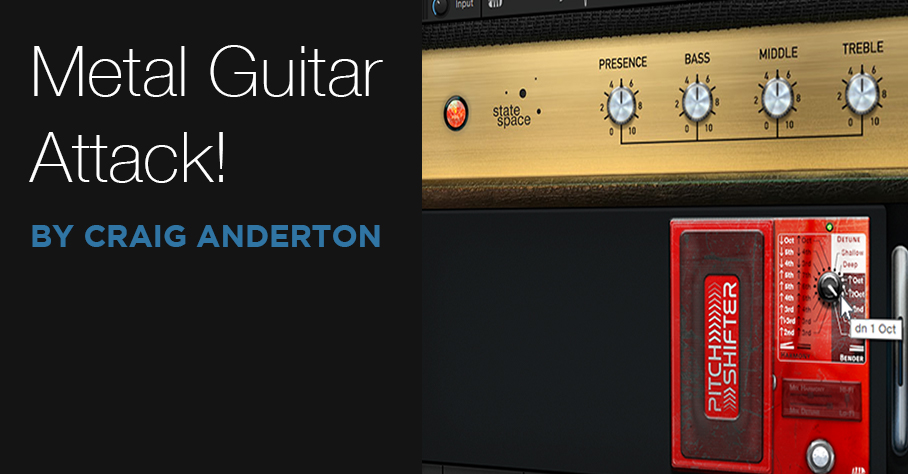 They’re called “power chords” for a reason—that delightful mix of definition, sludge, and hugeness is hard to resist. But can we make them more huge and more powerful? Of course, we can, so let’s get started

This tip gives two options: non-real-time, and real time (using the High Density Ampire pack, although other amp sims and processors can work, too). Either technique also works well for LCR mixing fans.

After the next section, we’ll get into panning and EQ. 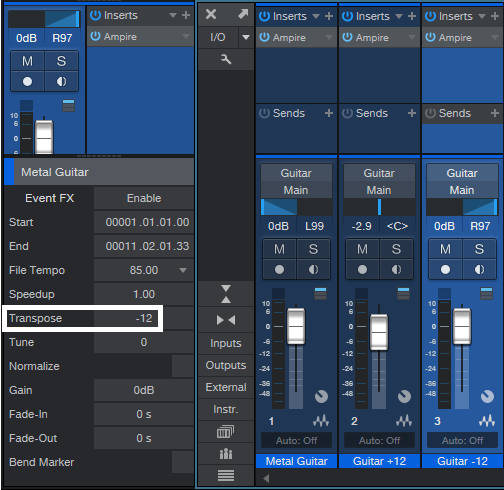 Figure 1: The guitar power chord track has been duplicated twice. The audio on the track to the right has been dropped an octave.

Follow the steps above for non-real-time hugeness, but don’t do Step 4. Instead: 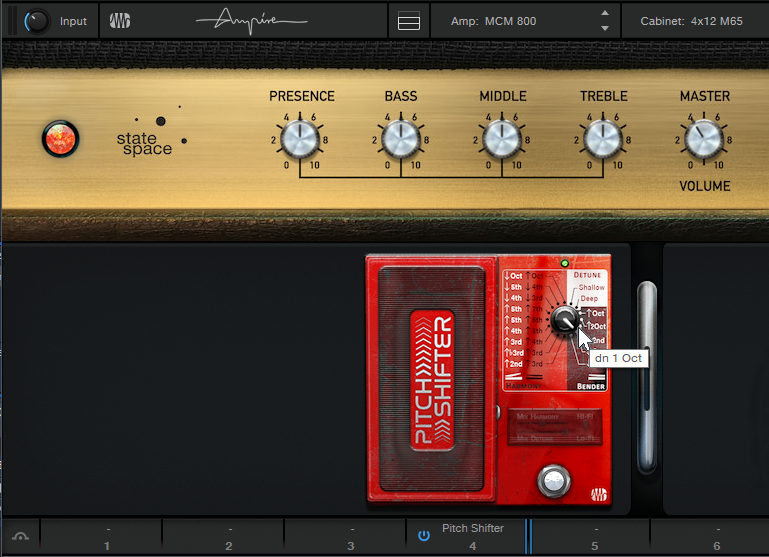 Whether you chose real-time or non-real-time hugeness, you now have three tracks: Standard pitch, tuned down an octave, and tuned up an octave. Let’s do panning and levels. Here are some options.

Applying EQ to the transposed audio can customize the sound further. If you’re doing a duo with only drums and guitar, on the octave below track, boost the bass and trim the highs. Pan it to center, and pan the other two tracks left and right. Another possibility is giving more definition to the octave higher track by rolling off the lows and highs a bit and boosting the mids around 2 kHz or so.

Let’s check out the audio example…remember, it’s only one guitar. 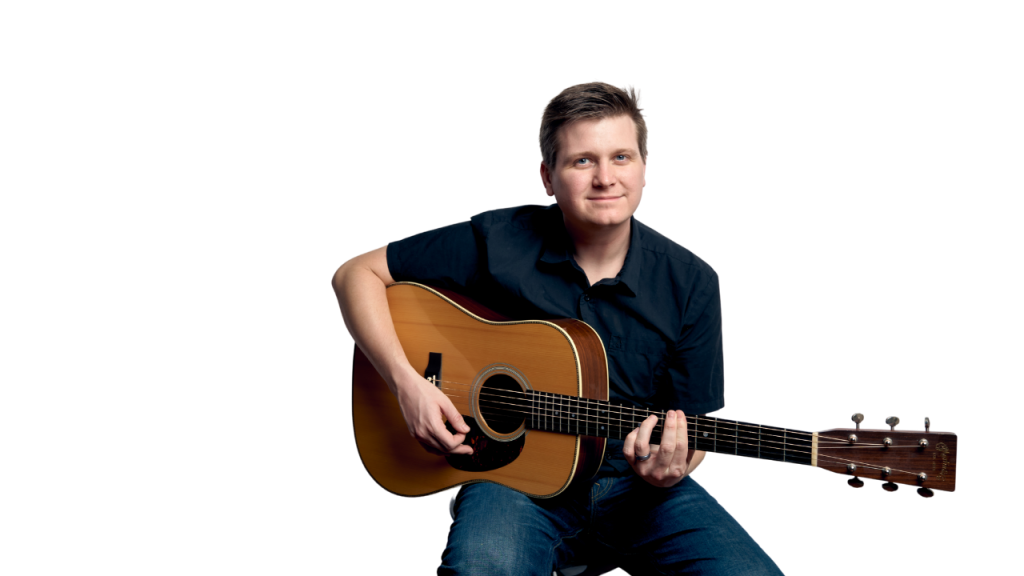