Vigilante Launches Remix Contest, You Could Win Studio One Professional and More! 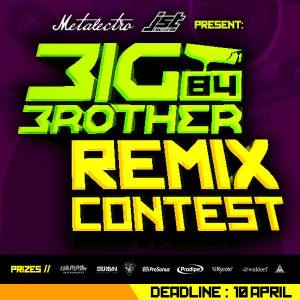 recently launched the worldwide We Are One tour,  And as if that’s not enough to keep him busy, he also just announced this remix contest, which (so far) is offering prizes from PreSonus, Keith McMillen Instruments, Waldorf, MeldaProduction, and many more!

Click here to get the stems and read the full rules.

As you may or may not know, we recently had a big hook-writing contest called #GetYourHooksIn, which put up the offer of an incredible recording package in exchange for a good hook. Diego entered said contest and placed third.

That said, Diego—more than any of the 300+ entrants—deserves an honorable mention. He chose to not only write and record his hook to enter the contest, but also to document every step of his process, and make the whole thing available on YouTube, for free, for the betterment of producers the world over. He covers several important topics that stand apart from the run-of-the-mill YouTube world of mixing, EQing, compression, etc. Instead, Diego focuses on topics like lyric writing picking the right singer for the song, and the importance of the first listen.

Check out the playlist below, as there’s clearly been a lot of time put into this and there are some wonderful tips in here. English speakers can turn on subtitles by clicking the CC button near the bottom right of the video player.

Runners-up of the #GetYourHooksIn contest:

#GetYourHooksIn was a smashing success, and we owe all entrants a tremendous thanks for their time and effort. We received hundreds of submissions, and narrowing down the winners among the top contenders was a very difficult decision.

BrandisX with “Love is on Your Way”

FTMG with “Lose Yourself”

Glenn What with “Grant My Wishes”

DHCosta with “All This Time”

Ray Man with “Get Ready”

The following entrants have their tracks set to disable embedding, but you can click over to their SoundCloud accounts to listen:

Jared James with “Stay Close to Me”

Here it is! The Grand Prize Winner of #GetYourHooksIn!

Congratulations to Netta Nimrodi and Arie Burshtein, lead singers of the Israeli Rock band LION TREE! Their winning track is playable below. For their outstanding efforts, they will be taking home the incredible grand prize package of a PreSonus ADL 700 channel strip, a pair of Sceptre S8 monitors, an AudioBox 1818VSL interface, a copy of Studio One Professional, and 50% of the songwriting royalties when the song is released!

We will be announcing more runner-up winners soon! Tremendous thanks to all who participated.

This just in from the globetrotting portion of our crew that spent some quality time at Musikmesse in Frankfurt, Germany, last week. We saw a lot of old friends, shook the hands of new friends, and shot some admittedly shakey-cam videos. But hey, that’s “from the trenches,” right? it’s just like being there!

Featured in this trifecta of Cinéma vérité are the Monitor Station V2, the Music Creation Suite, the Sceptre monitors, and—perhaps most important—our incredible #GetYourHooksIn contest. Click around the video below to get all the details.

We apologize in advance for the poor audio quality.

Dave Bryce on the Sceptre Monitors:

5aint and Luke Mourinet talk Studio One at Musikmesse 2014: Here’s a look at some of the “Why StudioLive” submissions that left us scratching our heads a bit. Laudable efforts all around made memorable with just a dash of mystery.

Entrant unknown’s “Aw shucks,” makes us happy and confused in equal measure; it’s entries like this that make us feel OK about the fact that sometimes people don’t read the rules.

Notable Submissions to the “Why StudioLive” Video Contest: Comedies and Musicals

It stands to reasons that musicians would make music videos, right? Some of these turned out to be incredibly funny.

Dave E’s “Give it to Me” was one of the earliest submissions, and we were amazed the he cranked out such an incredible production in such short time, and deserves special recognition for that alone. I wound up with this song stuck in my head while trying to fall asleep many times in the past several weeks.

Leslie C.’s smooth, contemplative exploration of the subject at hand left some of us bewildered, but most of us chuckling in “Ain’t no Dummy”

StudioLive Preacher’s “Why StudioLive” video was an early favorite of mine, but Carl thought it was “Too weird.” I think the real issue here is that Carl isn’t weird enough.

Dan C.’s “Why Anyone Should have a StudioLive” asks—and answers—many of the most pressing questions of our day.

Matt F’s “Presonus Rhyme” is the feel-good hit of the fall. Watch out, Jay-Z.

Andrew R’s video boldy mixes the dispariging influences of 2NU and Rod Serling to great affect in “My Town PreSonus.”

Stay tuned for a future post in our next category: The David Lynch Palme d’Or Awards!

Notable Submissions to the “Why StudioLive” Video Contest: Productions

I’ve said it before and I will say it again: you guys did some incredible work. We had so many astonishing submissions to the Why StudioLive video contest that we had to up the ante on our prizes significantly. We had planned to give away two prizes, and expanded this to four big prizes, a dozen copies of Studio One Professional, and a sizeable order of T-shirts that caused a cotton shortage in Kentucky.

Included below are some of our favorites that may not have made the final cut, but certainly cut out a little place in our hearts.

David B’s “Why PreSonus StudioLive at LocalMotive Studios” was a close, close contender.

“Why Not Presonus StudioLive?” from T-Bone pitches the StudioLive as exactly what it is: an all-in-one solution. “It’s so advanced, but also so simple.” This guy really gets it!

Chris’ “Get Connected with PreSonus” offers great cinematography, music, and detailed feature walk-through, while also extrapolating upon the mixer’s namesake: applications in both Studio and Live use.

Stay tuned for a future post in our next category: Best Comedies and Musicals!