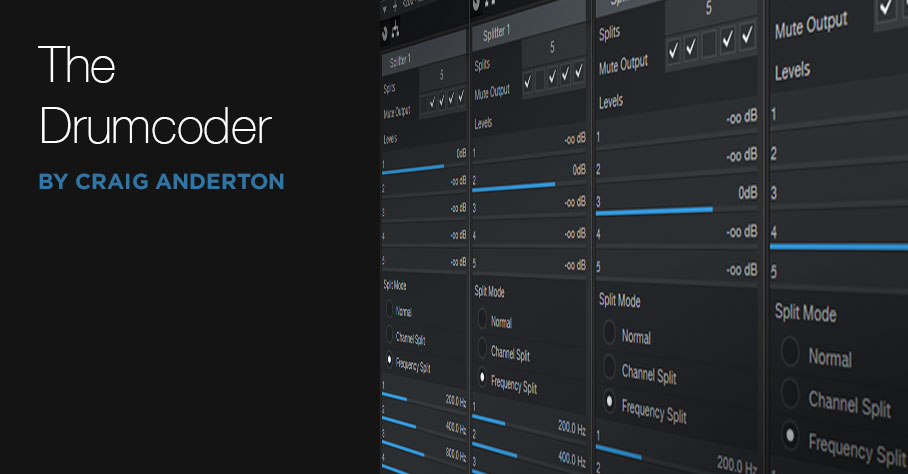 Vocoders are processors that use the audio from vocals (called the modulation source, or modulator) to modulate another sound, like a synthesizer pad (called the carrier). However, no law says you have to use vocals as a modulator, and I often use drums to modulate pads, power chords, and more. While Studio One’s toolset doesn’t have enough resolution for super-intelligible vocoding with voice, it’s perfect for drumcoding, which actually benefits from the lower resolution.

This tip is for advanced users and requires a fairly complex setup. Rather than go into too much detail about how it works, simply download the Drumcoder.song file, linked below, which has a complete drumcoding setup. Load Drumcoder.song into Studio One 5, press play, and you’ll hear what drumcoding is all about. (Note that the file format isn’t compatible with previous Studio One versions. However, based on the description in this tip, you should be able to “roll your own” drumcoding setup in previous Studio One versions.)

Let’s check out an audio demo. The first half has the drumcoded sound only, while the second half mixes in the drum (modulator) sound.

But wait—there’s more! Although the drumcoder isn’t designed to be the greatest vocoder in the world (and it isn’t), you can still get some decent results. Here, the voice is saying “Even do some kinds of vocal effects with the PreSonus drumcoder—have fun!’

Next, we’ll explore how it works…or if you’re impatient, just reverse-engineer the song. 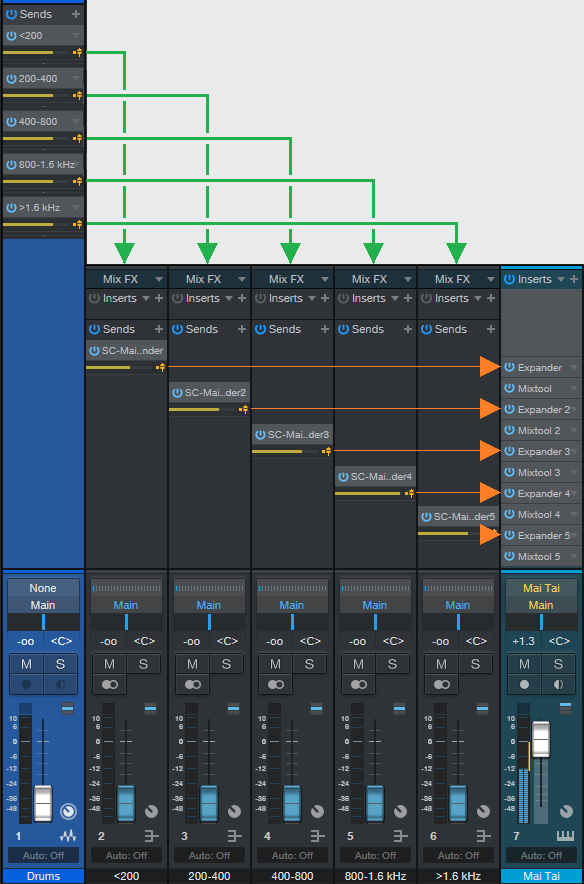 The Mai Tai carrier has a splitter set to the same frequencies. Each split goes to an Expander, which basically acts like a VCA; see Fig. 3. We don’t need to break out the Splitter outputs, because you can access the sidechain for the Expanders located within the Splitter. (A Mixtool follows each Expander, but it’s there solely to provide a volume control for each of the carrier’s bands in the control panel.) 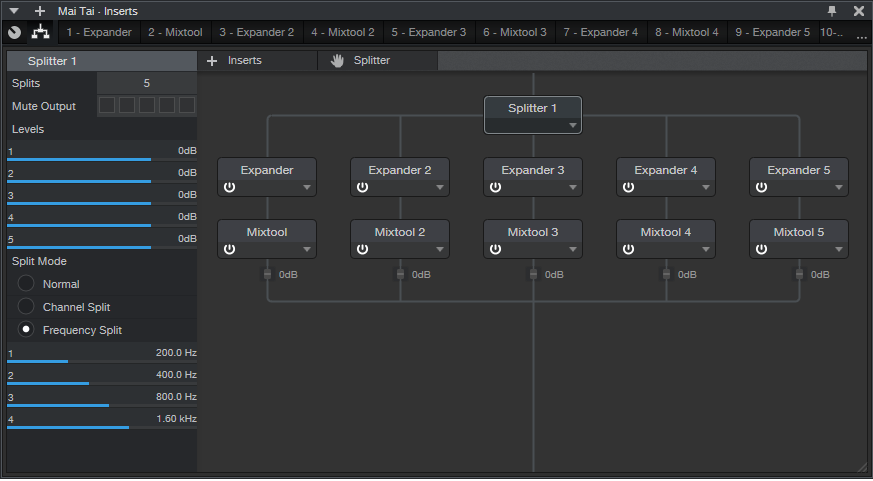 Threshold, Ratio, and Range cover the full range of Expander controls. They affect how tightly the Expander follows the modulator, which controls the effect’s percussive nature. Just play around with them until you get the sound you want. The Expander Envelope settings aren’t particularly crucial, but I find 0.10 ms Attack and 128.0 ms Release work well. Of course, you also need to enable the sidechain for each Expander, and make sure it’s listening to the bus that corresponds to the correct band.

The five knobs toward the right control the level of the individual bands by altering the Gain of the Mixtool that follows each band’s Expander. The five associated buttons enable or bypass the Expander for a particular band, which can give some really cool effects. For example, turn off the Expander on the Mid band, and with the Song’s Mai Tai preset, it almost sounds like a choir is singing along with the drumcoded drums.

Although the Drumcoder isn’t really designed for vocal effects, it still can be fun. The key is to bring up the > 1.6 kHz Bus slider, as this mixes in some of the voice’s “s” sounds, which give intelligibility. Experiment with the Expander controls to find what works well. If you really want to dig into vocal applications, edit the Splitter frequencies to optimize them for the vocal range instead of drums…or leave a comment asking me to pursue this further.

Due to the complexity, if I think I’m going to use the Drumcoder, I’ll just treat this song like a template and build the rest of the song from there. But once you understand the principle of operation, you can always add the effect in to an existing song as needed. I have to say this is one of my favorite Friday tips ever… I hope you enjoy playing with the Drumcoder!

Posted in Friday Tip of the Week | 5 Comments