Friday Tip of the Week: Get Your Kicks with Kick Drum Replacement

I admit it…I’m very picky about kick drums. But I also like using drum loops, so I often want to replace the kick. Fortunately, it’s not hard to do with Studio One, and you don’t need a dedicated drum replacement application to do it.

In this example, the audio track with the drum loop (Acoustic Verse 2 in the screen shot, toward the left) has two pre-fader sends. One goes to the Main Drums bus, which carries the drum loop audio. The reason for having a separate bus with the drum audio (and for turning down the original drum audio track) is because we want to reduce the level of the loop’s kick as much as possible. So the loop’s audio has two Pro EQs in series—both set to 48 dB Low Cut at around 100 Hz—to create a super-steep slope and get rid of most of the kick. 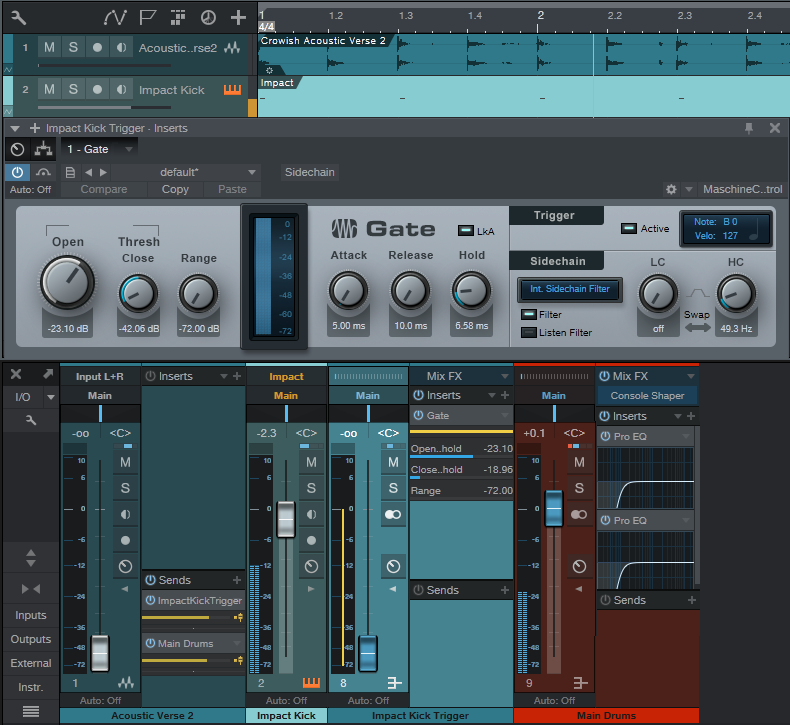 The other send goes to the Impact Kick Trigger bus, which exists only to hold a Gate (that’s why the bus fader is all the way down—we don’t want to hear the audio). To isolate the kick for triggering, turn down the Gate’s HC control so that the Gate responds only the lowest frequencies where the kick drum lives. Whenever the Gate opens, it can send out a MIDI note with your choice of note and a fixed velocity (you’ll have to add any dynamics yourself), and an instrument track can respond to that note. I set up an instance of Impact with a suitable kick drum, and assigned the Gate trigger to it. So, Impact provides the replacement kick drum sound and the Main Drums bus has the original drum loop without the kick. You can listen to the kick in real time as you trigger it, but you can also record the MIDI trigger in the instrument track.

The only caution is that the Gate parameter settings for Threshold and Attack/Release/Hold are critical for reliable triggering. For example if there are 16th-note kicks, you have to make sure that hold is short enough to allow retriggering; and you want Threshold high enough to it’s triggered only by the kick.

There are many variations on this theme…you may want to double an existing kick with the kick replacement, rather than reduce the original kick’s level as much as possible, or use the Pro EQ Low Cut filters to take out only the very lowest frequencies, so the original kick provides the higher-frequency beater sounds…whatever sounds best.

Of course if the drums are on individual tracks, then it’s easy to replace the drum sounds. But even with a mixed drum loop, it’s often possible to isolate at least the kick and snare to give drum loops a whole new character.

Posted in Friday Tip of the Week, Uncategorized | 6 Comments