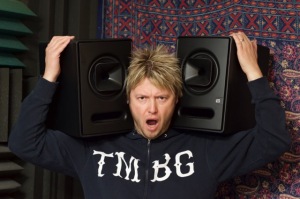 They Might Be Giants’ uniquely avant-nerd brand of pop/rock has seen a lot of evolution over the band’s career of 30+ years. While the band remained a plucky duo for the first phase of their career—John Linnell and John Flansburg—the release of John Henry found the band to take on… well, a band. While some critics might be inclined to leverage this transition to allege some sort of “maturation,” longtime fans know better. Short-time fans just need to throw “Doctor Worm” for a spin to see what I’m getting at.

Given TMBG’s somewhat surprising sonic evolution—a move that alienated what few boneheads existed among the ranks of their fans—it’s great to see (hear) First Album Live—a live full-band treatment of TMBG’s eponymous 1986 debut, informally/aka Pink. Hearing classic tracks updated with full-band arrangements (and the infectious hollerin’ of enthused concertgoers) brings us a tasty mix of the familiar and the new-ish—a real treat for longtime fans. And that band. Chops tapeworthy.

Or discworthy. Or Edison cylinder-worthy. Whatever. Point is the live arrangements of these songs as interpreted by said band deserved to be committed to history, and it’s happened—in part due to fan demand, and in part due to Sceptre monitors!

First Album Live was mixed by Scott Bozack, “Prez” of Big Gig Productions, who has been touring the world over with the ‘Giants since 2008 as their Tour Manager, Production Manager, and FOH engineer. He says, “I really love the CoActual horn design. It really creates an amazing image, and helps me visually place instruments in the music. Less EQing is required to to carve out space. Love them!”

John Flansburg, guitarist and vocalist of the band notes, “With the definition of the Sceptre S6 monitors, Scott Bozack was able to translate the power of They Might Be Giants’ live sound to a proper recorded mix.”

First Album Live is free, and can be downloaded by clicking here. Enjoy!