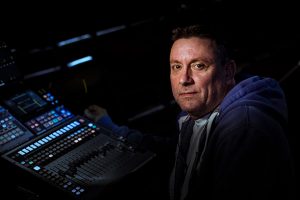 [This just in from Nigel of DMT Productions!]

Hi everyone, my name is Nigel Trego, I am the Technical Director at DMT Productions, a UK-based events production company. DMT specialises in producing live events for theatres, arenas and large festivals—from sound, lighting and projection to filming, photography and FX. DMT has been operating for ten years and has a team of 20-plus specialists including sound engineers, lighting engineers, dancers, performers, AV techs, drone, and Steadicam operators, photographers, and pyrotechnicians. DMT Productions have chosen the PreSonus Studiolive Series III Ecosystem as our touring mix package.

We are at present engaged with several projects based in theatres, arenas and large festivals predominantly in the EU. As I write this, members of our team are working on a project filming with US-based Nitro Circus in Wales, helping to promote their World Games event across the UK. 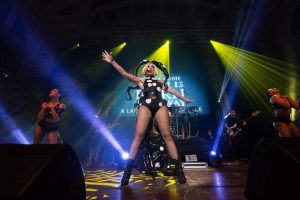 Our current featured artist is Donna Marie, a multi-award-winning artist in her own right and the National Tribute and Music Award official #1 Lady Gaga Tribute and Impersonator for the last seven years. We are currently working for Donna to produce her UK tour of A Star is Born This Way, a tribute to the Oscar-winning film A Star is Born, in act one followed by a second act of full-on Gaga hits. The show features live and pre-recorded video, a live band, dancers, and pyrotechnics, and will be featured in a number of UK theatres—and even some arenas where Lady Gaga herself has performed!

DMT uses the PreSonus StudioLive Ecosystem exclusively. We use the PreSonus Studiolive 32R as a stage box and the StudioLive 16 at front of house. The logical layering and compact size of the StudioLive 16 make it perfect for all venue FOH sizes (some venues have limited FOH space, especially festivals) and it is easily transportable in the crew bus. We chose the PreSonus StudioLive Ecosystem for many reasons; previous experience with the StudioLive AI series and the legacy StudioLive products not only gave us the confidence in reliability and sound quality but also confidence in the ease-of-use. The layout is logical, and the Fat Channel allows for fast and clear access to parameters that are essential to a live performance. Naturally, we evaluated the competition with products such as Allen and Heath SQ-series and of course the Behringer X32 range. When compared via price vs. features/performance/reliability, PreSonus was a no-brainer. The PreSonus products are competitively priced and offer similar features to the competition… however, our experiences with PreSonus legacy products swung it for us.

The feature sets of the Studiolive Series 3 Ecosystem are in abundance and too many to mention in this blog. However, we have some favorites! AVB is a clear winner. Great performance and flexibility allowing us to route any signal to whatever we want without having to buy expensive (licensed) AV networking expansion cards. We were using Focusrite Saffire Pro 40s as audio I/O for our sequenced stems—one of the only I/O devices that can handle 10 individual outputs (we run some of our stems in stereo). Now we can hook up a USB cable from our show control Mac straight to the StudioLive rack or console mixers and have as many USB audio channels for stems as we need; we can then route USB across the AVB network with practically zero latency. Most consoles have complicated menus for digital patching and for configuring matrices. We find the PreSonus very intuitive and easy-to-use at the console level—but even easier via UC Surface on a tablet. 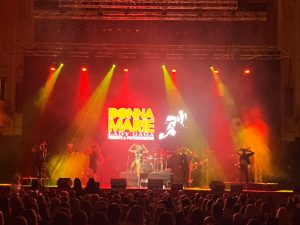 QMix-UC is also a fantastic feature. Our bands play with a click so that their performance is in sync with pre-recorded video and pre-recorded stems; thus monitor mix set-up is critical. Using an in-house desk can take up to an hour to get the perfect IEM mix for all band members, and even then that might need to change during the performance. The ability for the band to adjust their monitor mixes via the PreSonus QMix-UC app is now something that we cannot live without. Event setup time and sound check duration are dramatically reduced allowing us to focus on other areas of the production. Additionally, we save on the cost of a monitor desk and engineer. The project and scene management is second to none. Project, scenes and even the Fat Channel library can be exported/imported to/from a tablet or PC over USB or Wi-Fi.

Our sound engineers love the PreSonus workflow and use the Fat Channel Collection Vol. 1 plug-in suite extensively. We are, however, excited about future PreSonus integration with Waves using the Waves AVB Soundgrid Bridge announced earlier this year.

The ability for us to record 34 channels of 48K multi-track at live events to SD Card (and Mac/PC) is also a fantastic feature. This allows us to take the recording back to the studio and load it straight into Studio One to mix for video production that we then use for further event promotion. We used this feature extensively during a multi-tribute festival this year where our camera operators filmed the entire three-day event. Our sound engineer took the FOH multi-track recordings back to the studio to mix. We were able to create professional video packages that we then provided to the bands that were performing, which they in turn now use as their promotional material for their socials and web.

The majority of the time, our engineers seldom use the console mixer, tablet at FOH is the way forward for them. Other great PreSonus features include the ability to share scenes between the different mixers, no matter the form factor, this is great to have a backup mix ready to go in case of an HW failure. Virtual sound check is a great tool and the ability to use two mixers in tandem is superb. Let me elaborate on that. We have the 32R set as “standalone” at drum riser position with all stage mics and instruments feeding it and the 32R is, in turn, feeding the IEMs, stage wedges and the main PA. Our show control MacBook is hooked up to the 32R via USB and digitally patched running 10 channels of USB audio. All of the 32R channels (including USB) are sent over AVB to the FOH console and the FOH console mixes (Matrix and Aux) sent back to the 32R over AVB. The flexibility of digital patching in conjunction with AVB is incredibly powerful. This allows us to benefit from the USB channels on the 32R at riser position while retaining full mix control at FOH.

One of our productions was to headline a festival this summer on a clifftop in beautiful West Wales, we had an audience of around 5000 at this particular event. We had decided to take our 32R (running on a Relio UPS) and feed the event PA (via their mixer) from the Left and Right channels of the 32R to allow us to soundcheck quickly. The event who supplied PA had a mixing desk they used for the other bands performing that evening of which we only used the two channels (Left/Right). Just before our performance began the heavens opened! Once the rain had stopped we managed to wipe the stage dry, tip the water out of the keyboard player’s keyboard and start the gig! After a spectacular video-based intro, three bars in on the first song, the power went out, no sound, no lights, no video.

The band continued to play, they were on IEMs from the 32R. Fortunately, the stage wedges were also working, they were on a different power feed to the main PA, so we turned them to face the crowd. It turns out that water had worked it’s way into the mains Distro taking out one of the electrical phases. It took the event organisers 13 minutes to fix the issue only to find their networked stage box had blown, so still no sound! We plugged the PreSonus 32R directly into the event’s amps and away we went! The show must go on. The reason for telling this story is because when we plugged the PreSonus directly into the amps, the difference in the sound quality was incredible, so much so that a number of people came over to FOH to comment on how good the sound was and to ask why it wasn’t as good for the other bands that were on during the event (not using our PreSonus). The event organisers were over the moon that the event continued during the power outage and commended DMT for keeping the audience entertained and stopping them from leaving the event. 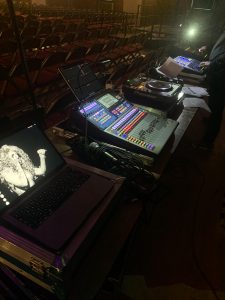 One of the most attractive things that PreSonus has to offer is that the end-user has a voice. Development of their hardware and software is continuous, user feature requests are taken seriously and the majority of them appear in the next software builds. The support infrastructure is excellent. We have called PreSonus UK on many occasions, the staff are very knowledgeable, friendly, and take a vested interest in helping to resolve even the most complex of problems, efficiently and with haste. On top of that, they are really nice guys that obviously love what they do. Interaction on social media by the PreSonus team is also a major plus point. To be able to reach out to people like Rick Naqvi, Jonny Doyle and Seth Martin on the StudioLive FaceBook Group is a great value-added commodity that is seldom seen with other companies.

For us at DMT Productions, PreSonus is a brand that we trust and we love using the products.

To find out more about DMT Productions, please feel free to visit our websites:-

Posted in Artist | Comments Off on Nigel Trego of DMT Productions: Commited to The StudioLive Series III Ecosystem