Metric Tonne of Studio One Add-ons Added-on to shop.presonus.com

We’ve recently released a lot of loop content for Studio One. It’s all available exclusively at shop.presonus.com. We’ve got a  little something for everybody—especially if you’re making hip-hop or electronic music of nearly any flavor, including Indian Dubstep, we’ve got a loop pack for you. Click on any of the titles below to learn about the packs, hear audio demos, and download! (You can also buy them directly from within Studio One 3.)

From EarthMoments, we’ve got the Desert Oud; an ancient Iraqi instrument, Dubstep India; a blend of wub-wub basses with acoustic Indian instrumentation; and the Pure India bundle, which is a bundle of three packs that include gigabytes of traditional instruments, percussion samples, and vocals.

SampleMagic has been very prolific of late, covering all the basses. The most notable bass, of course, is the TB-303 in their Acid House pack. Further packs include the tape-echo saturated Future Dub; the stomping UK Garage of Future House; and the bevy of classic vintage Roland and LinnDrum hardware samples in New Wave. Ibiza-worthy Melodic Deep House and Festival Anthems round out the set. The details of these packs are too numerous to list in the blog, here, but click through any of the titles to learn more about the packs themselves. SampleMagic had planned to release a Vaporwave sample pack, but then this happened, effectively beating them to the punch. 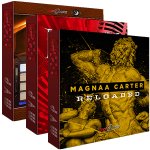 MVP has brought in five new packs bristling with pure hip-hop bombast—but that’s not all. The Trevor Lawrence Jr.-produced Sound Squad offers nearly 2 gigs of hip-hop, EDM, R&B, and pop elements. Mix and match them to make your own styles! Sound Gang offers loops, riffs, and one-shot samples for modern urban production.  is another modern hip-hop kit full of big drums and grimy synths, as do Magnaa Carter: Reloaded and OVXO Vol 2. Hook City Platinum Edition rounds out the offerings with an R&B and Soul-tinged vibe, produced by first-call musicians, writers, and engineers.

While not technically a loop pack, we’d be remiss to overlook the Analog Model Machine for Mai Tai. 200 synth presets lovingly crafted in the mold of Vangelis, Jean Michel Jarre, and more, from our very own Ari Ahrendt, Quality Assurance Specialist at PreSonus Software. You can get your Klaus Schulze on without devoting a room of your house to expensive analog electronics.

Posted in Studio One | Comments Off on Metric Tonne of Studio One Add-ons Added-on to shop.presonus.com