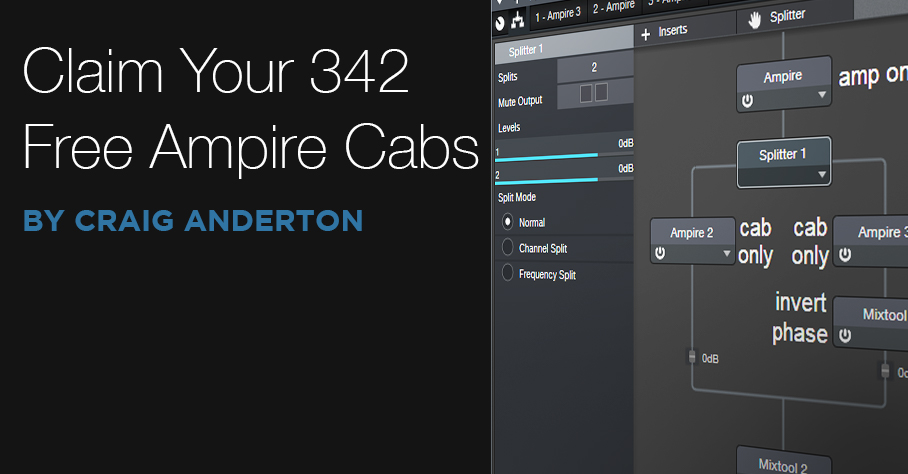 Add the cabs from the 3rd gen Ampire with the ones from the High-Density expansion pack, and you have 19 cabs.

Surprise! You actually have 342 cabs. Not all of them sound fabulous, but some do—especially if you throw a Pro EQ into the mix. What’s more, with clean sounds, the new cabs give “varitone”-like filtering effects that almost sound like you have an infinite supply of different bodies and pickups. We’ll show how to take advantage of these new cabs with Studio One’s Pro and Artist versions.

How It Works (Pro Version)

With Pro, the Splitter is the star (fig. 1). The Ampire at the top provides your amp sound (optionally with effects), but don’t load a cabinet. Split the amp’s output into two parallel paths, each with an Ampire that has only a cabinet (no amps or effects). Insert a Mixtool in one of the parallel paths, and click its Invert button. 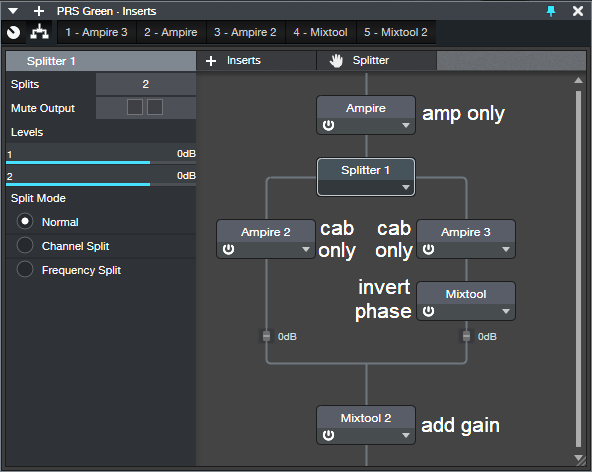 If you select the same cab for both parallel paths, you won’t hear anything, because they cancel. But with two different cabs, what they have in common cancels, while their various modeled resonances remain. This creates the sound of a different, distinctive cab. Of course, you can also play with the cab mic positions to generate even more possible sounds…the mind boggles.

Finally, add another Mixtool at the output so you can increase the gain. This compensates for the reduced level due to one path being out of phase. If you want to add a Pro EQ (recommended), insert it before the Mixtool.

How It Works (Artist Version)

Fig. 2 shows how to set up busing to do this in Artist, although Pro users might prefer this option because the editable elements are more exposed. 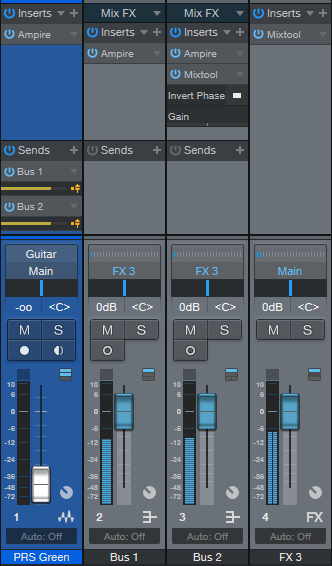 Figure 2: Setup for the Artist version.

Note that if you choose the same cab for the Ampires in Bus 1 and Bus 2, and your original channel’s fader (in this case, PRS Green) is all the way down, you should hear nothing due to the cancellation. If you hear something, either the sends to the buses, the bus levels, Ampire output controls, or mic settings are not identical for the two channels.

The composite cab sound in the FX3 bus can often benefit from adding a Pro EQ before the final Mixtool. Typically you’ll roll off the bass, or make the treble less bright, depending on the cabs. And again, let me remind you to try this with clean sounds—it’s sort of like out-of-phase pickup wiring, but with hundreds of options.

One limitation is that there’s no way to change cabs with a control panel knob or with automation. To explore the various sounds, choose a cab for the Ampire in one of the buses, then run through the cabs in the other bus’s Ampire. Some sounds won’t be all that useful, others will be distinct and novel, and some that don’t appear to be useful at first come into their own with just a touch of EQ.

Want an audio example? Sure. This combines the VC 20 and with an out-of-phase British II, with a little low-frequency rolloff. The Open Air reverb uses an impulse from my Surreal Reverb Impulse Responses pack. You’re on your own for checking out the other 341 combinations!

When you find a combination of cabs that works, write it down—with this many cabs to choose from, you might not find it again.

Posted in Friday Tip of the Week, Studio One | 24 Comments