Football, Podcasts and Studio One

Over here stateside, ‘Tis the season for family, over-eating, traveling, watching football, and more eating. You may not be a huge fan of the holidays, but I love them! The holidays have something for everyone, much like a recent podcast I came across on Twitter called The F.A.N. Show.

The F.A.N. Show is a one-man, award-winning sports variety show based in Spokane, WA—and it’s in a league of its own. There’s something for every fan. The show is hosted by Richard Tieman, who is a musician, producer, sports fanatic, and Studio One user. After five years of recording 440 podcast episodes on the same AudioBox iTwo he purchased in 2015, Richard shows no signs of slowing down. We wanted to know more about how his podcast came to be so successful. 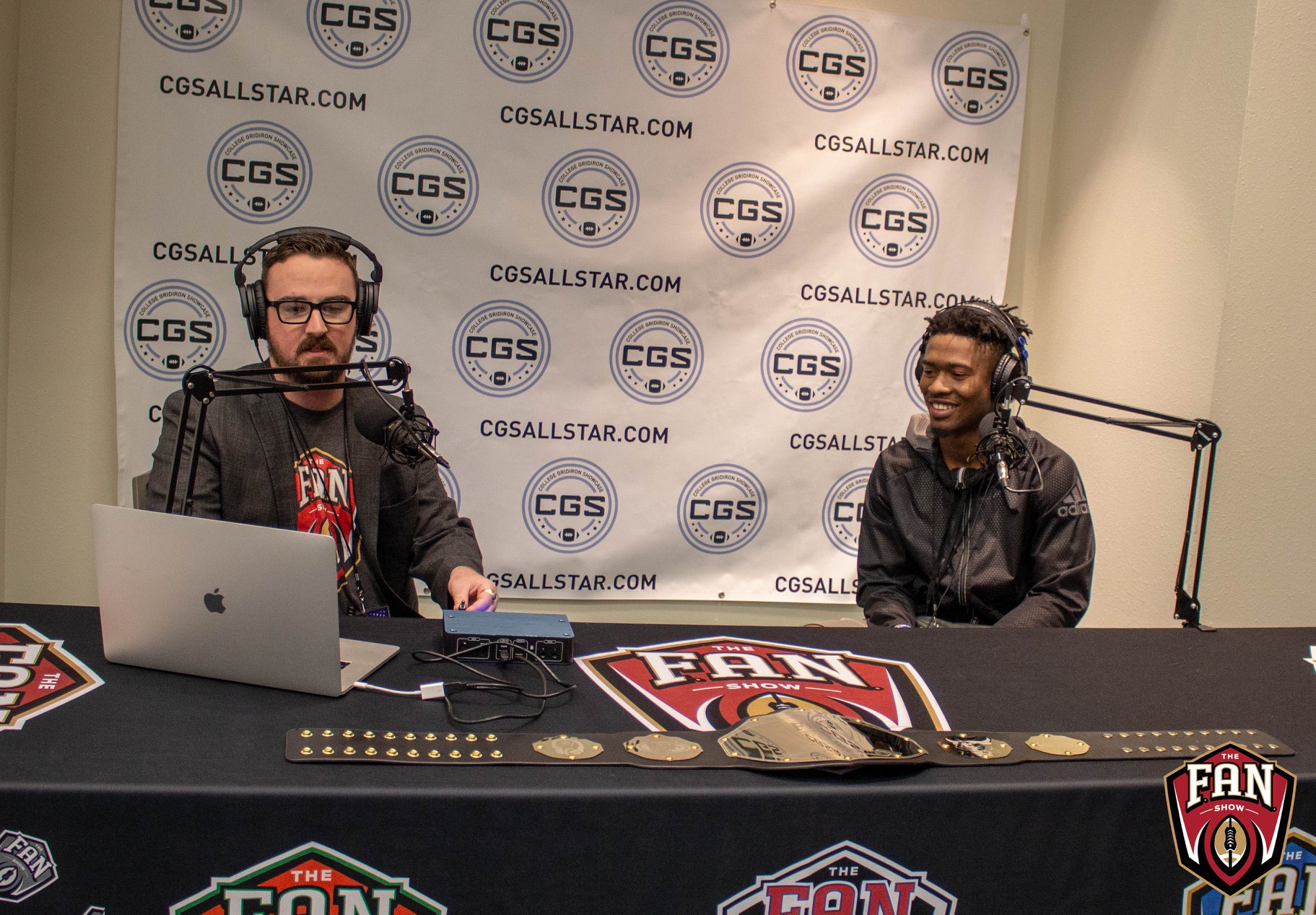 Tell us about your background. How long have you been in the audio industry?

I was a drummer for a punk rock band since I was 17, and loved music, performing live, and traveling to different cities. I also love a variety of things like football, the outdoors, pop culture, and even pro wrestling. I had a knack for entertaining people, and I’ve always been comfortable on a microphone. I met my wife seven years ago and we’ve been married for five, and she is my single greatest supporter and biggest fan. I’ve been in audio for about 15 years. 10 years ago I got really passionate about it when I started hosting karaoke at a local bar while I was still touring with my band. Then when we broke up five years later, a friend suggested that I should start my own podcast, so I figured… why not?

How has the audio industry changed since your early days?

It’s changed quite a bit. When I was in the band, podcasts weren’t very popular yet. Not many people even knew what they were. Recording and editing equipment and software were super expensive, so you had to really have a passion for audio/video in order to justify going all-in on the idea. I remember making a business proposal for starting my own karaoke and entertainment company in 2015, and the money I needed for karaoke equipment and songs, just to get started, was about $3,000. Now, everyone and their mom has a podcast or YouTube channel and the cost to buy a “starter kit” for those is around $300. Quite the difference.

As a wrestling fan, he’s one of my favorites. He’s also the frontman for the band Fozzy, and he doesn’t just interview wrestlers. He has a wide variety of different guests and that’s what I love about his show. The mix. I guess his podcast is what inspired me to branch out to talk about more than just football. Yes, I love football, but I love other things as well. Music, comics, the outdoors. Why limit myself?

Tell us about your podcast.

At first, it was just me and my thoughts about football and my 49ers. It’s the sport I know well, and the one I felt the most comfortable talking about. I also hated all the irrelevant news you started to see and hear on mainstream sports media. It was less about stats and highlights and more rumors and gossip. I wouldn’t say I started my podcast out of spite, but the idea of being different was certainly appealing. What was a weekly podcast called The ButtFumble Show is now a live-streamed variety show that airs three times a week and covers a little bit of everything: The F.A.N. Show. “Everyone’s a FAN of something, and we have something for every fan.”

Where did the idea for your podcast come from?

The rooftop of a bar in downtown Spokane where my 10-year high school reunion was happening. My buddy Cameron and I were talking about his Seahawks and my 49ers. and going back and forth about their last season and stuff that needed to happen in the offseason. He was really impressed with not only my knowledge of my team and the league, but that I could carry a conversation and could back up my opinions with facts. So he asked if I had ever thought of becoming a sports analyst, and I laughed and said, no thanks. That’s when he suggested starting my own podcast.

How does your first podcast compare to your most recent?

Oh boy. My first episode was terrible. 20 minutes of me sitting in a chair in the spare room of our house, just rambling on about the upcoming season and what to watch for. I’d never used any PreSonus equipment before, or any podcasting equipment for that matter, so my mic was turned down really low and I didn’t know how to edit the recording. Like I said, terrible. Now, almost 440 episodes later, I have my own intro theme, I have segments, sound effects, I know how to edit and get the best sound quality I want. My best episode is always my next episode. 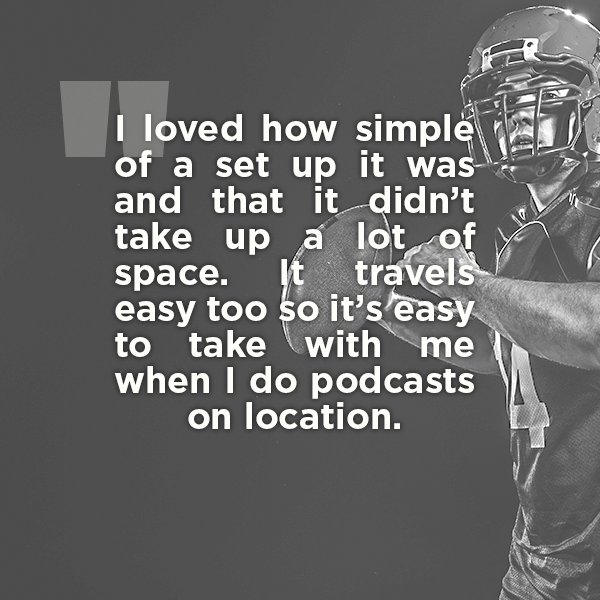 There are so many podcasts these days. How do you stand out?

In all honesty, I can’t say that I do “stand out.” I know that I’ve learned a lot in five years of doing my podcast, and even though all the changes and trying new things, I’ve always stuck to what I believe and not trying to conform to certain styles just to get clicks or downloads. My fans are my fans, and as long as they tune in and listen, I’ll keep doing it. But I do know what makes my show “different,” is that even after five years, I’m still doing it. Not everyone who has thought “Hey, I can do that,” has actually done it for very long. Some guys I know that started podcasts never made it past 10 episodes. I’m about to do my 440th. I pride myself on constantly wanting to learn and get better. Try new things. And I’m persistent. 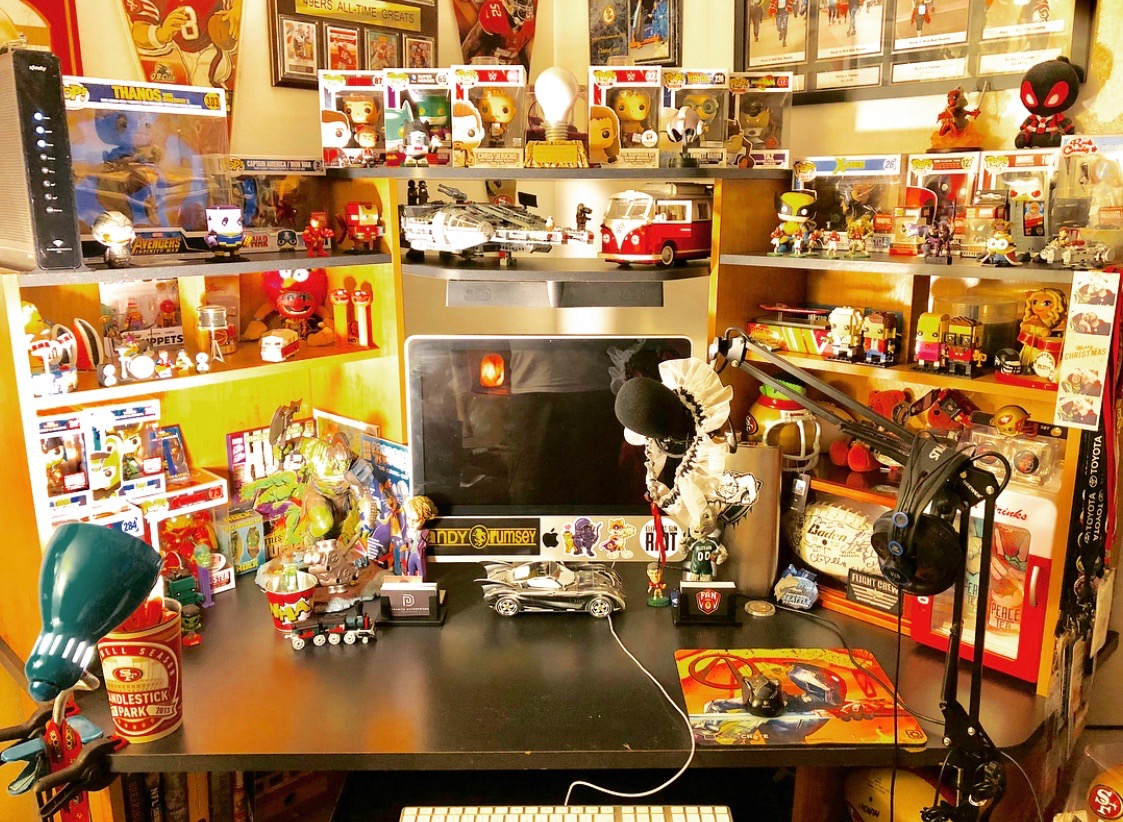 What advice do you have for someone who wants to start a podcast?

Be ready for criticism and be open to feedback. Feedback is one of the hardest things because it’s not all good feedback, but you need people supporting you that will be honest with you and tell you what they liked and more importantly, what they didn’t like. That, and to be consistently persistent. Like I said, I know people that never made it more than 10 episodes. There will be a lot of excuses you can make for yourself, but if it’s really something you’re passionate about, you’ll make it a priority. I’ll tell anyone and everyone what programs or equipment I use, and people think I’m crazy for giving away my “secrets to success.” That’s not the secret. I don’t even have a secret. I just made my show a priority and have built a brand as a result.

Google. Haha. I talked with my wife about the podcast idea and since the band had broken up and I was going back to school for my AA degree in Business Management, she said I needed a hobby and thought the podcast would be good for me. So we searched “Podcasting kits” and the 2nd or 3rd result was the “PreSonus AudioBox iTwo.” About $220, it came with the AudioBox, mic, mic cord, headphones, and Studio One for editing. Connect it to the USB port on your computer and you’re ready to roll. I loved how simple the set up was, and that it didn’t take up a lot of space. It travels easily too, so it’s easy to take with me when I do podcasts on location. 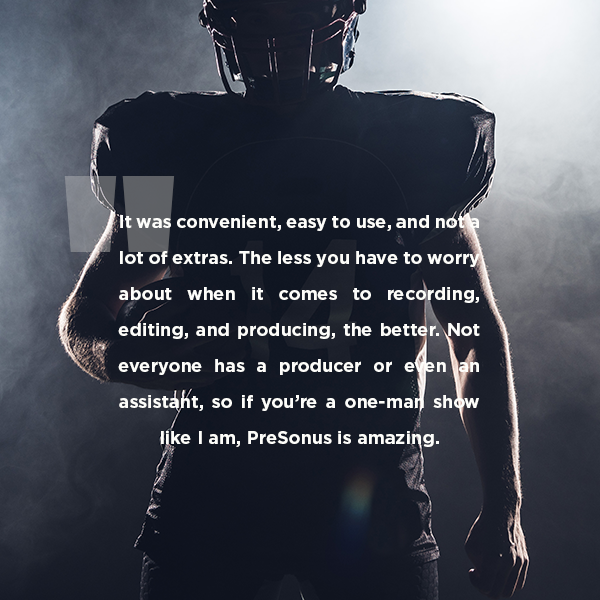 I still use that same AudioBox iTwo (five years later) and I absolutely love it. I actually want to get another one so I can have one for my studio and one specifically for traveling. Or have one as a backup at the very least. You can never be too prepared when it comes to technology. I’ve since upgraded my mics, but still use Studio One and that same box for my show.

Why was PreSonus a good option for you? Was it easy to learn?

It was convenient, easy to use, and not a lot of extras. The less you have to worry about when it comes to recording, editing, and producing, the better. Not everyone has a producer or even an assistant, so if you’re a “one-man show” like I am, PreSonus is amazing. There was definitely a learning curve. A lot of it was self-explanatory, but I have a lot of audio friends that were happy to help me. YouTube is also an amazing learning tool, haha.

Do you ever take your podcast on the road? 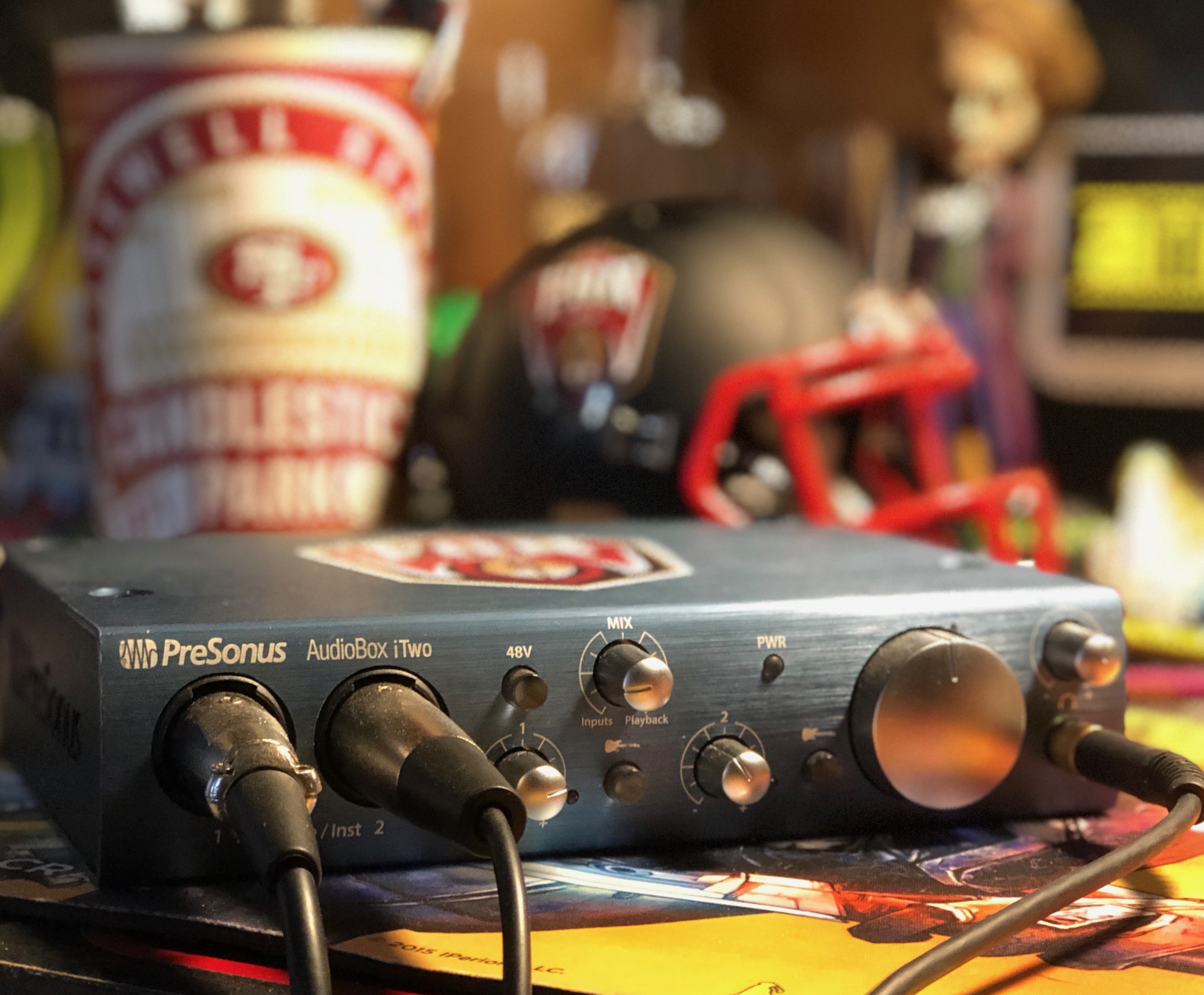 All the time. I’ll take it to local events like Comic-Con and interview special guests and cosplayers, or I’ll go to the comedy club and interview the comedians in the green room before their show. I’ve even interviewed bands at our local concert house before their shows. But my favorite time of the year is my annual tour. I take the AudioBox and my set up and go to different events across the country like BattleBots, or arena football games and I’ll host tailgate parties and use it for a live stream, or I’ll interview players and coaches after the game. I’ve gotten pretty good at setting up in hotel rooms and at arenas.

I just finished my third tour, which was awesome, and I was also hired to do media for different events where I would go and interview players, coaches, staff, cast and crew and publish them as podcasts to help promote the events. The show has a great following and I’ve gotten more and more opportunities like these as a result. I recently accepted the position of Director of Communications for the Sioux Falls Storm. An indoor football team that had heard of me and my podcast and wanted me to be apart of their winning team for 2020. I will be doing that as well as continuing what I do with my podcast. I’m hoping 2020 is my biggest year yet and that moving to a new city will hopefully create new opportunities. The new owners of the Storm were very adamant about me continuing to do my podcast and continuing to grow my brand, so that is what I will look to do next year!

Where can we listen to your podcast?

The F.A.N. Show is available on most major podcasting platforms including:

Comments Off on Football, Podcasts and Studio One