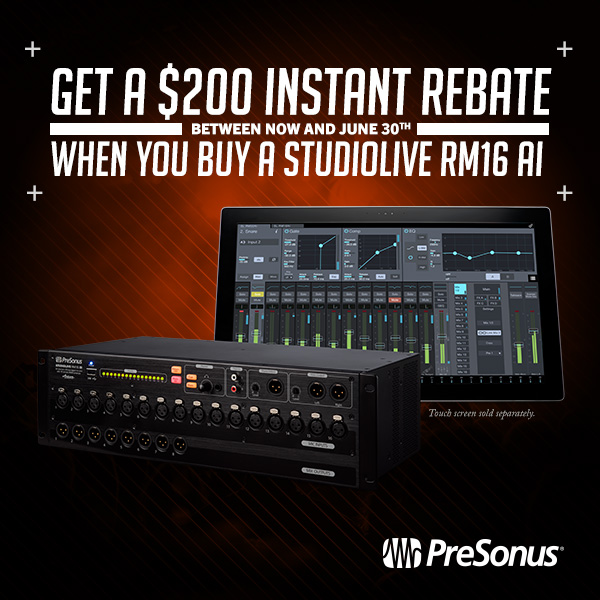 This will allow you to connect a StudioLive AI console mixer at front of house to a StudioLive RM rackmount mixer onstage, allowing you to use it as a stage box—eliminating the need for an obnoxious, heavy snake. Ray is happy to show you how to hook it all up, as well as answer some frequently asked questions.

And, until April 30—if you buy a StudioLive RM or StudioLive AI mixer, we’ll add the option card FREE! Click here for more details on that.

We expect the SL-AVB-MIX card to be available early to mid April, 2015.

@TheBlueDevils and the StudioLive AI Solution: Interview with David Gibbs [This just in from Randal Walker of 22 Media Productions, who recently used his StudioLive to record David Ellefson, bassist of Megadeth, for the audiobook narration of his autobiography, “My Life With Deth.“]
This is our third book project. The first was David’s book Unsung, then we did the audio version of his book Making Music Your Business. We also did a movie called Battlefield of the Mind that David narrated.
All three of these projects were tracked using a Studiolive 16.4.2 AI.
Being a PreSonus user, I was excited to put the new AI board to use, and David’s latest project was the perfect chance to do so.
We recorded straight into StudioOne Professional 2 ,and the final project was mastered in Studio One as well.
My reason for using the StudioLive AI? Ease of use, and it s sounds great. Very clean-sounding.
The audiobook version of My life with Deth should be coming out by end of June.

Check out @SonicSenseAudio ﻿’s look at the StudioLive AI mixers and speakers in Tales From the Trenches – The Bar Gig!

Check out Sonic Sense Pro Audio‘s look at the StudioLive AI mixers and loudspeakers in Tales From the Trenches – The Bar Gig! If you want a real-deal look at how the AI ecosystem works at an actual gig, look no further.

See the video below, and be sure to read the whole article by clicking here.

Comments Off on Check out @SonicSenseAudio ﻿’s look at the StudioLive AI mixers and speakers in Tales From the Trenches – The Bar Gig!

Doug Gould of WorshipMD talks about phase, what it is, how it can work against you, and how you can correct it.

For info on the StudioLive AI digital mixers, click here.

For more from Doug Gould and Worship MD, click here.

Doug Gould of WorshipMD talks about how to make the best use of one of the top secret weapons in your mixer’s arsenal: the high pass filter!

For info on the StudioLive AI digital mixers, click here.

For more from Doug Gould and Worship MD, click here.