[This just in from Dave Hinson of Hinson Sound in Bethlehem, PA!]

Dave Hinson Sound has been one of the sound vendors at Musikfest in Bethlehem for 15 years. Musikfest is the nation’s largest free music festival, boasting performances on 16 stages over 10 days. Our line array rig is deployed at the Volksplatz tent.

This year we became the sound vendor at the Main Street stage. When the contract was awarded, I called Rick Scott at Parsons Audio to order a pair of StudioLive 328AIs with the companion sub—The StudioLive 18sAI.

PreSonus was my first and only choice since hearing these speakers at a Dante class in Philadelphia back in April. I was first impressed with their sound, and they became a must have when I learned they were Dante-ready, and fully compatible with my Yamaha CL consoles.

What I was most impressed with, however, was that we unboxed the speakers, plugged them in, and they worked beautifully. No hassles, no tuning and no tweaking. We found that the speakers delivered incredible musical clarity. I believe they are two or three notches above their competition. Before next year’s festival season, I hope to make an all-PreSonus system: more mains, subs and monitors all running on Dante.
I am even thinking about how I can use lighting truss to support two mains per side and placing the sub below the stack.  This year, I used my QSCs as monitors, I hope to replace them with StudioLive 312AIs, or I could always use the 328’s in that mode also. You have a great product that has risen above the competition. I am sure 2016 will be a great year for you. Keep up the good work!

The group depicted below The Boiled Owls, performing a mix of Americana, bluegrass & folk music.

Comments Off on Studiolive AI PA Systems Shine at Musikfest 2015

Special Offer On StudioLive AI Loudspeakers in the USA – save up to $1,000! 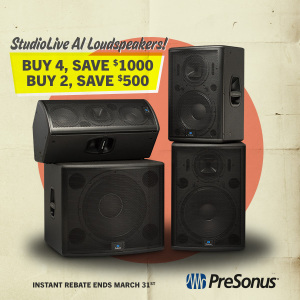 We thought you should know that for a limited time—until March 31st, 2015—music retailers across the US are offering a monster rebate on the StudioLive AI Loudspeakers:

No matter how you slice it, that’s a savings of $250 a piece for some incredible speakers. The StudioLive AI PAs feature our Active coaxial loudspeaker design, as well as sophisticated networking and DSP. With free PreSonus SL Room Control software, you can configure, tune, and monitor networked StudioLive AI loudspeakers from anywhere in the venue—Click here for a video on that. You can even visually display the room layout on a laptop or iPad!

But the StudioLive AI Loudspeakers aren’t just about brain—there’s a lot of brawn here, too. And when it’s time to put some boom in your room, these speakers offer irresponsibly high power—without the breakup and distortion typically associated with chest-resonating high volume. For more details on the minds behind the StudioLive AI Loudspeakers, click here for an interview with Dave Gunness.

But don’t take it from us. Check out some of these reviews:

Click here to find a dealer in the USA.

One other thing: if you want some nitty-gritty technical data, help yourself to any of these informative .PDF downloads:

Hey StudioLive AI PA Loudspeaker owners, we thought you would like to know that SL Room Control is available now for Mac and Windows. It’s free. The iOS version will be available soon.

Click on over and log in to my.presonus.com to get the latest firmware update for your StudioLive AI PA loudspeakers, which will unlock their full power via SL Room Control! SL Room Control provides wireless access to a suite of professional system-alignment controls for customizing each StudioLive AI-series speaker on the network to compensate for room anomalies, create delay systems, eliminate feedback, and more.

To get SL Room Control, simply log in to your My.PreSonus.com account and download the installer for SL Room Control, as well as the firmware update required for your speaker(s) to connect to it. Once you’ve updated the speakers’ firmware, you’ll be able to take advantage of SL Room Control. Have fun!