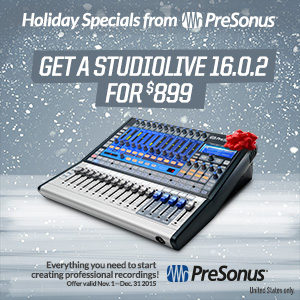 I like to think of The StudioLive 16.0.2 as the scrappy little brother of the StudioLive family. Well into the StudioLive AI era, this Classic model is still one of the best-selling digital mixers we offer.

Why? In short, the 16.0.2 punches with heavyweight power in a bantamweight frame. You get sixteen inputs and four Aux Outs, the same XMAX preamps and Fat Channels found in more expensive StudioLive mixers, and Smaart Measurement Technology via VSL. This all makes it ideal for both project studios and mobile PA/DJ rigs. Pound for pound, it’s arguably the most feature-rich mixer in the line. And don’t forget the 16.0.2’s secret weapon that no other StudioLive mixer in the line has: MIDI control! You can adjust mixer settings live, in-performance, with a standard MIDI controller.

While more wallop for your wallet has always been part of what makes the 16.0.2 what it is, we’ve made that end of the deal even better for a while. Until Dec. 31, we’ve dropped the price on the StudioLive 16.0.2 for customers in the USA down by a hundred bucks to a mere $899.

Take one home. With a little training, your productions will be punching well above your weight class. Just make sure to bring in this new gear before the New Year—this offer ends December 31.

Comments Off on Get the Studiolive 16.0.2 for a Reduced Price Until Dec. 31 [This just in from Ramon Castillo of Bleep Blop Ensemble. Bleep Blop is an electro-acoustic experimental music ensemble that is collaborating with Grammy-nominated performer/composer Sandeep Das—and a StudioLive 16.0.2! They are looking to create a record and performance series with Sandeep, and could really use your help!]

I wanted to let you and the PreSonus community know that my ensemble Bleep Blop has launched a funding campaign with the great tabla player, Sandeep Das.  We’ll be doing our normal thing, hooking him up to lots of gadgets via the StudioLive 16.0.2 mixer, and creating some cool new sounds!
Performer/composer Sandeep Das, twice nominated for Grammy Awards, performs regularly with the Silk Road Ensemble and Yo-Yo Ma as well as several internationally renowned artists. Sandeep’s very extensive bio can be read here.

One of Bleep Blop’s primary missions is to make music technology accessible to a wide variety of performers, composers and other artists. We are committed to the music of young and emerging composers, and we have premiered 13 works and performed countless others over the last 3 years.

Sandeep Das and Bleep Blop will write lots of new music, record and perform these new works, and release lots of media.

Join PreSonus Technology Evangelist Justin Spence as he takes you on a guided tour of the StudioLive 16.0.2!

The 16.0.2 packs a lot of mixing power into a very portable package. Tune in to learn some of its innermost secrets. LH Dub on using the StudioLive 16.4.2 for live dub mixing

[This just in from Luis “LH Dub” Henrique, who is using the StudioLive 16.4.2 for live remixes of his band’s dub tracks! It’s not often that we see a StudioLive in the “mixer as instrument” application—but here it is! Check out the vid!]

Hello PreSonus! My name is Luis “LH Dub” Henrique, a Brazilian who is passionate about music production and mixing technology. In particular, I love mixing tracks with Jamaican rhythms to create new songs. I have always needed a high-quality interface in order to create my songs, and I have finally found it in the PreSonus StudioLive 16.4.2. It has everything to fulfill my needs, and meets my high standards of quality while offering a great variety of tools. It was love at first sight! I had no previous experience with digital mixers, and I was a bit afraid that I couldn’t manage it, but as soon as my 16.4.2 arrived home I quickly realized that StudioLive is a very easy interface to work with.

Personally, I really like reverb and delay effects. So when I first experienced the effects available on the 16.4.2, I was totally amazed. The delay filter is incredible. I also have been using StudioLive to record live bands and it does a great job! The compressor, gate and all other tools are very well placed. It’s easy to handle and work with.

The StudioLive 16.4.2 is also very resistant  By accident, it has fallen from 1.5 m height and it still works perfectly… only few scratches tell the story!

Because of my wonderful experience with StudioLive, I have decided to purchase only PreSonus products in the future due to the fact that I am very pleased to work with this equipment that, besides having a great design, has the best quality you can get.

Bleep Blop is coming back for more with the StudioLive 16.0.2: Free livestream April 20 [This just in from Ramon Castillo—Bleep Blop is gaining some serious momentum! If you want to see the StudioLive 16.0.2 run as the beating heart of a symphony of strange hardware electronics, then don’t miss this event! You can view it online at stream.bleepblop.com. 7:30 p.m. April 20.]

Our prior performances have successfully merged the art of acoustic music with the mystique of audio technology, but for this concert, we are going to bring improvisation and technology to a new level.

Selection of works to include:

Do you like your music a little bit electronic? And a lot experimental? If so, this may be an event for you, and in case you can’t make it to MIT, you can check out the steam on April 13 at 8pm EST.

“We’re using the StudioLive 16.0.2 as a super flexible interface. We’ve got a chain of moogerfoogers, piano, violin, iPad, Dave Smith Tetra, Mbira and more all hooked into the mixer. Some processing is done using a Mac running Ableton Live, and the rest is done with the MoogerFoogers and the iPad.”

“The routing varies greatly between each piece do we take heavy advantage of scene programming. Sound checks couldn’t be done without SL remote on the iPad.”

“I may try to get some good video of our setup on our concert on the 20th. I haven’t begun to promote that show yet, but the 1602 will be used in much the same way.”

This event on April 13 promises to deliver the same mix of ambitious musical forces.

Selection of works to include:

This is a triumph. Imogen Heap recently showed up on Dara O’Briain’s Science Club, and she brought her otherworldly Power glove 2.0 MIDI gyro-accelerometer Kinect-handwear with her. We’re flattered and honored that she’s entrusted the StudioLive 16.0.2 to corral her abstruse mad-science signal chain.

Seriously, how many different technologies do you think are collaborating in tandem here?