Make a Splitter for Studio One Artist 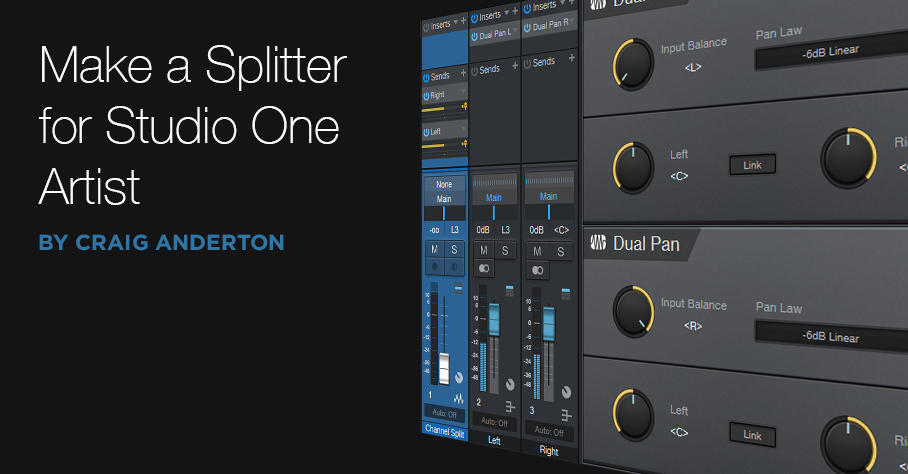 One of my favorite Studio One Professional features is the Splitter, and quite a few of my FX Chains use it. If you own Studio One Artist, which doesn’t have a Splitter, you may look longingly at these FX Chains and think “If only I could do that…”

Well, you can implement most splitter functions in Studio One Artist, by using buses. All the following split options are based on having a track that provides the audio to be split, along with pre-fader sends to additional buses. Note that the track’s fader should be turned all the way down.

The Splitter’s Normal mode sends the input to two parallel paths, which is ideal for parallel processing. For Artist, we’ll duplicate this mode with two buses, called Split 1 and Split 2 (fig. 1). 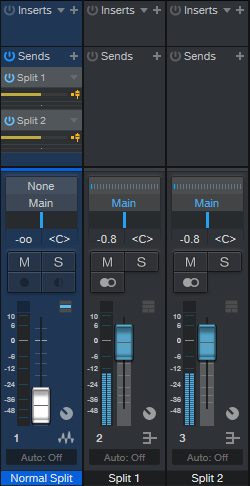 Figure 1: How to create a Normal split in Artist.

The sends to the buses are pre-fader, and panned to center. One send goes to Split 1, and the other to Split 2. Now you can insert different effects in Splits 1 and 2 to do parallel processing. 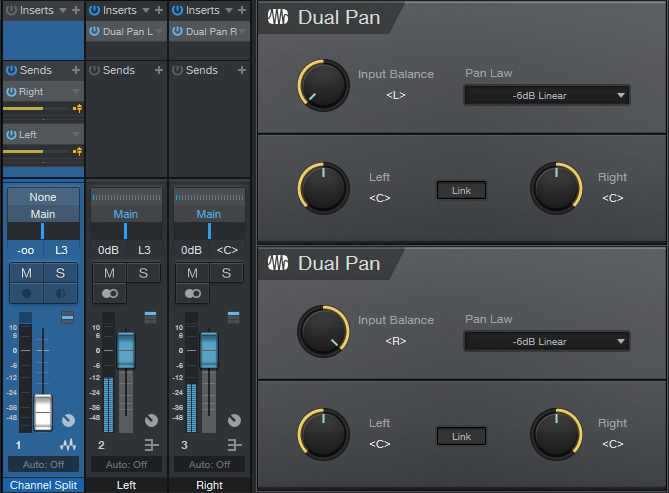 Figure 2: How to create a Channel Split in Artist.

This is tough to duplicate, because the Splitter can split incoming audio into five frequency bands. If other DAWs don’t do it, we can’t expect Artist to do it. But, we can do a three-way, tri-amped split into low, mid, and high frequencies (fig. 3). 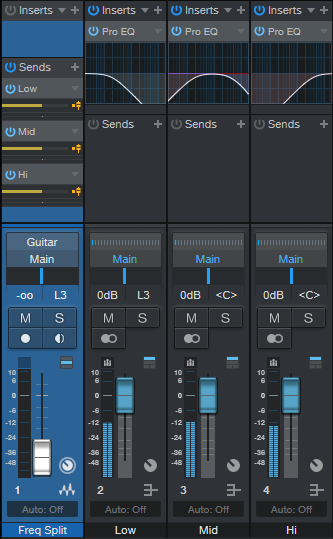 This split is like the Normal Split, except that there are three buses and pre-fader sends instead of two, and each bus has a Pro EQ2 inserted. Each EQ covers its own part of the frequency spectrum—low, mid, and high (fig. 4). Using 6 dB/octave slopes doesn’t provide as much separation between frequency ranges as steeper slopes, but the gentler slopes are necessary to make sure the frequency response is flat when you mix the three channels together. 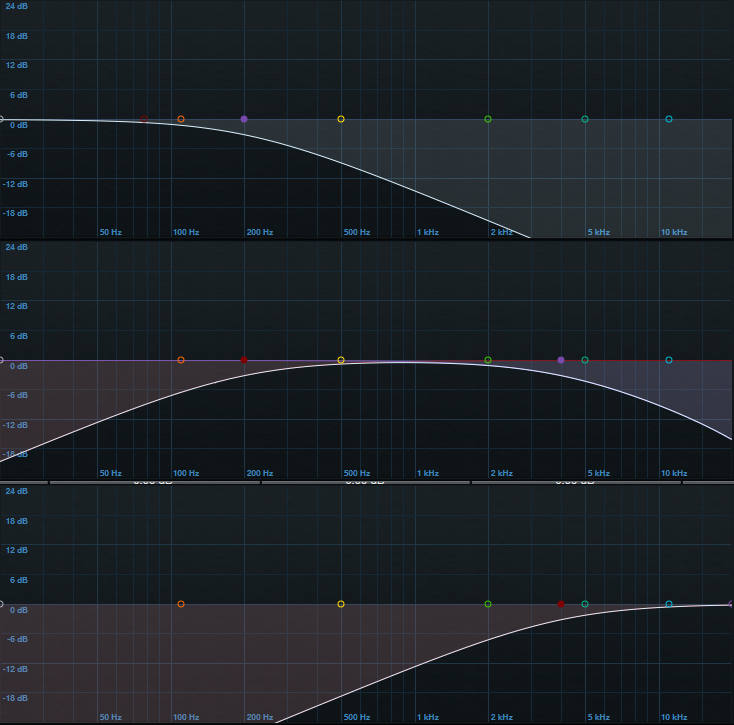 The only filter sections we need to use are High Cut and Low Cut—you can ignore everything else. Fig. 5 shows the settings. All bands have 6 dB/octave slopes.

Granted, setting up these splits takes more effort than dragging a Splitter plug-in into a channel, but the result is the same: cool parallel processing options.

Tags: Studio One Artist, Tip of the Week

PULL N WAY and the 24 hour Studio One Challenge!

Now. Think about re-writing, producing, mixing, and mastering a song in that amount of time and putting it out for the public. Sound reasonable? Oh, and be sure to book a photographer to shoot the cover art for the single.

Did we just give you an anxiety attack? Sorry.

That’s the exact challenge that was presented to PULL N WAY, a female pop duo from Central Switzerland. Fortunately, Studio One was there to help tackle the assignment.

LATTESSO is a “cold coffee to go” brand in Switzerland. They connected with PULL N WAY for the launch of their latest vegan products. LATTESSO based the 24-hour challenge on the idea to have PULL N WAY re-write one of their existing songs—which would include tracking new vocals and creating new cover art, including photography. Watch the whole challenge here:

We had the opportunity to chat with PULL N WAY and their producer, Andy Prinz about the challenge.

During the challenge, did you want to give up? What kept you going?

Well to be honest, the hours between 3 a.m. and 6 a.m. were the hardest. We just came back to the studio after our photoshoot in Zurich. We almost fell asleep but our passion kept us motivated to continue the challenge! We managed it to finish the song and we sang tons of other songs to stay awake. 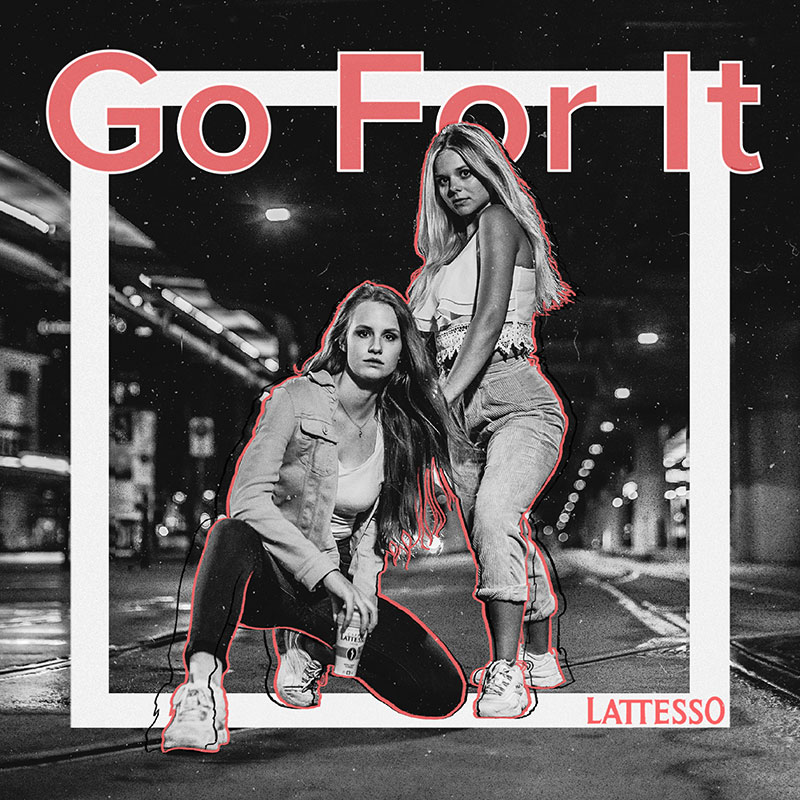 All the gear is fantastic and affordable. We use Studio One to track all our vocal recordings, edit/comp the vocal tracks, and create basic ideas in pre-production. For monitoring, we have two Sceptre S8s and a Tremblor, and for the recording a Studio 192 USB interface with two priceless headphone outputs and latency-free monitoring. Studio One is a fantastic piece of software, for both composing and producing—and it’s super fast with all the drag & drop functionality. Plus, we love the graphical interface!

Andy, one of our producers, is a long-time Studio One user… I think from version 1.6 on! So all our first recordings from four years ago had been done in Studio One, and with further PreSonus gear already, so it’s basically the DAW we’re introduced to from the very beginning.

The drag & drop functionality, vocal comping, Melodyne & VocALign integration via ARA, new gain functions and the GUI. We totally fell in love with the ATOM controller, which we’re starting to use as a live tool to trigger samples or vocal/drum loops from our existing songs.

How easy/difficult was Studio One to learn during the 24-hour challenge?

It was super easy to record and edit all vocals in this short time, and we made it all on our own. For the final product, we had help from Andy.

Where did you go for support?

We had a basic introduction by our producer, and just learned by doing in Studio One Artist—and we used some YouTube tutorials as well.

Where did you go for inspiration?

We worked with a really cool film crew, they are as old as we are so we had a great time together which made it easy to think about the new lyrics which represent those happy and positive vibes. So we didn‘t really need to go to a certain place to get inspired.

The gear is affordable and offers a huge variety of functions for semi pro’s and professionals alike! We also like that we don’t have to carry a dongle for Studio One! PreSonus is part of our musical journey for a long time and we’ll continue using it for all current and future recordings. At the moment we’re writing and producing new songs for various collaborations and new Pull N Way songs.. so stay tuned. Equipment: We just found out on Instagram that PreSonus has released some microphones! We’ll definitely try these out!

We have released our debut album “Colours” this year but–after several live gigs during Summer–we’ve already started working on new material for our upcoming releases, ranging from Pop to Electronic. We’ll also try to make at least 1-2 cloud trap songs… therefore we’re actually looking for a suitable French rapper. Besides that, we have loads of featuring requests, mainly from the EDM scene/DJs and we’re currently evaluating what’s best for us and what’s the best fit!