Hope you had an awesome Christmas!

Here is our latest video.  Scott Szeryk performing Caprice No. 5 by Paganini.
Released on Christmas day and Recorded on the amazing Studio Live 24.4.2
http://www.youtube.com/watch?v=lpcyVz9Tfh0 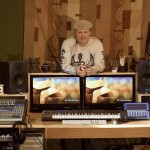 [this just in from Scott Szeryk!]

Check this out: We are in the process of a live DVD, “Scott Szeryk Live at Aeolian Hall,” from his Manifesto Tour from summer or 2012. This was recorded on the one and only StudioLive 24.4.2! Note the iPad on the mic stand, which was used for i- ear monitor mixing via SL-Remote. Totally awesome!