Join us! We’ll be taking a look at the new StudioLive AR hybrid mixers, and the incredible new features they’re adding to the StudioLive family, Including Bluetooth, SD recording and multitrack outputs over USB. We’ll also take a quick look at the AIR Loudspeakers and why they’re one of the most versatile, customizable, and portable loudspeaker options available. Tune in and win! We’re giving away a StudioLive AR8 and Studio One 3 Professional!
Enter your e-address below to get a quick e-mail reminder on the day of the show.

Watch the show on Thursday 09/15, streaming live at presonus.com/videos/presonuslive or on our YouTube channel! 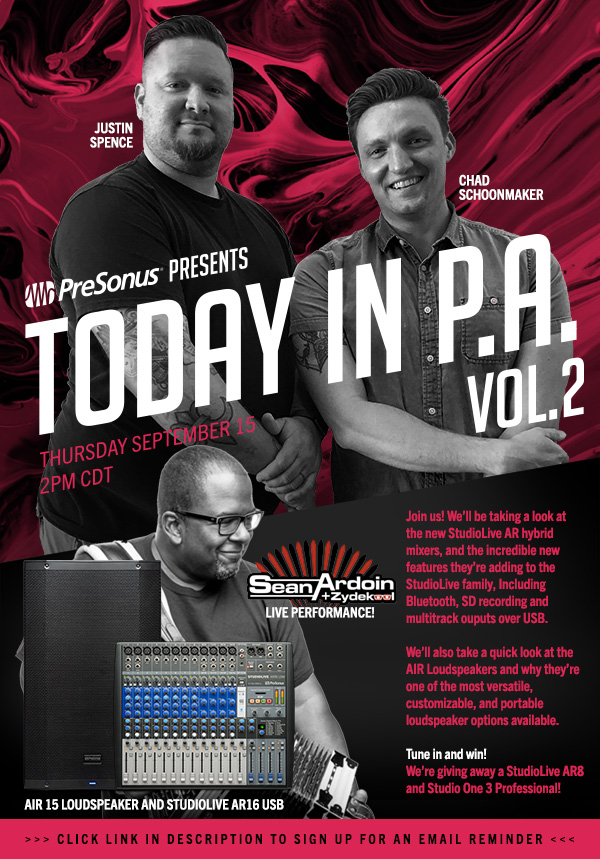 PreSonus LIVE is BACK on August 11 at 2pm CDT! 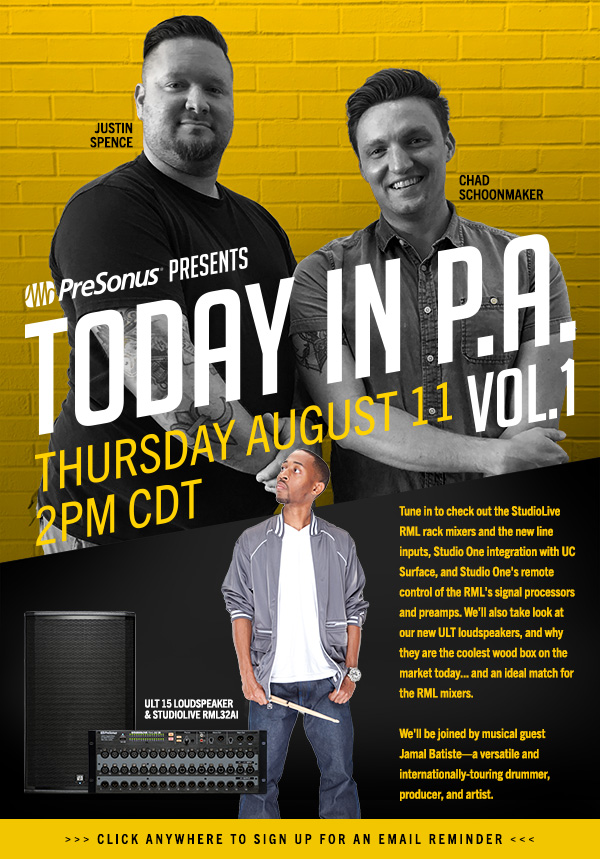 Tune in to check out the StudioLive RML rack mixers and the new line inputs, Studio One integration with UC Surface, and Studio One’s remote control of the RML’s signal processors and preamps. We’ll also take look at our new ULT loudspeakers, and why they are the coolest wood box on the market today… and an ideal match for the RML mixers. We’ll be joined by musical guest Jamal Batiste—a versatile and internationally-touring drummer, producer, and artist.

Click here to watch the show  on Thursday, or use the form below to receive a reminder e-mail on the day of the show.

Studio One Raises The Bar Again on Feb 25

TUNE in on February 25th at 10 AM or for the 2 PM rebroadcast at:  http://www.presonus.com/videos/presonuslive.

UPDATE 2/16/16: we’ve added more prizes to this show! You’ll receive a prompt to enter the giveaway via e-mail when you view the show on Feb 25. We will also have a separate giveaway for our Twitter audience.

What ARE the new updates, you ask? What are the new features? And when are they coming?

Tune in on Feb. 25 to find out, at: http://www.presonus.com/videos/presonuslive. We’ll be giving away a StudioLive RM16AI to a viewer of the first broadcast.

Pre-register via this Eventbrite ticket to receive an e-mail reminder on the day of the show! 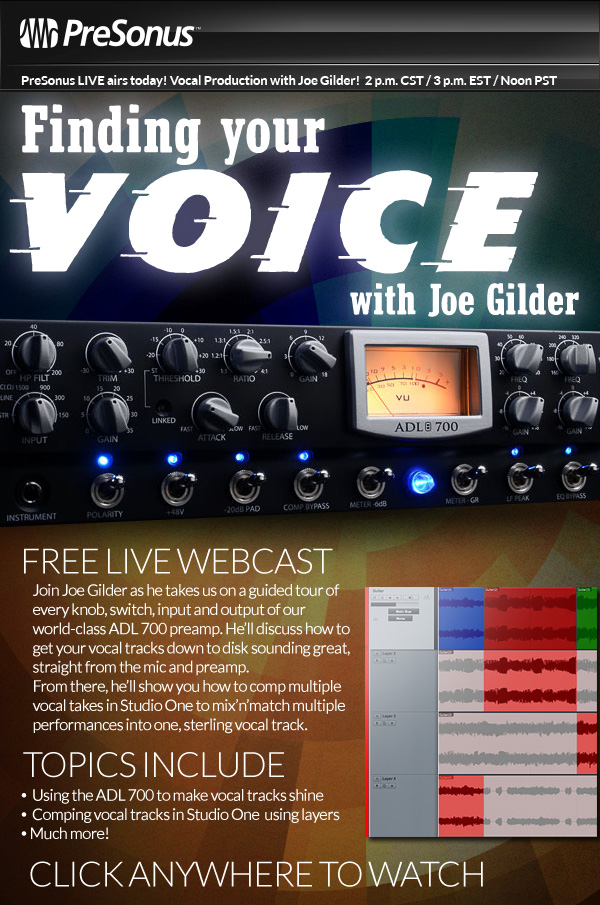 Join Justin Spence, John Jones, Donyea Goodman, and John Mlynczak as we take you on a full tour of the PreSonus Music Creation Suite. This hardware/software package includes everything you need to get your creative vision out into the world!

What’s the surprise? Tune in Thursday, July 17, 2014 at http://www.presonus.com/videos/presonuslive to find out.
After all, you might be the lucky viewer who WINS the surprise. George Straight’s crew and Reba’s band took some time out of their busy schedules—they were in town to play the Bayou Country Superfest—to come by the PreSonus HQ and check out the studio. We begged and pleaded for them to lay down a few tracks, and they obliged!

Justin also will take you on a little tour of our not-so-little John Storyk-designed studio. We’re really proud of it; check it out! Join Justin Spence as he takes you on a tour of our John Storyk-designed recording studio at the new PreSonus headquarters in Baton Rouge! We’ve got the ADL 700 Rack of Doom, triple-paned iso booths, and a stunning live room. We’ve had special guests come by lately, including Reba’s band and George Straight’s production crew. We’ll show in-studio performances and interviews from them, and who knows what else? Tune in!

PreSonus LIVE: Why AI is Now up on YouTube

Justin Spence shows you the difference between the classic StudioLive mixers and the new StudioLive AI mixers, including a feature overview and connectivity!

For more on the StudioLive AI series, click here.