We’ve got a new Mai Tai preset collection for Studio One 3 Artist and Professional! Take a trip back in time with Nori Ubukata’s 20th Century Sound Box and rediscover the legendary analog sounds of the 70s and 80s. Famed Japanese sound designer and synth/theremin artist Nori Ubukata recreated some of the most memorable sounds by electronic music artists such as Kraftwerk, Tangerine Dream, Vangelis and Wendy Carlos. The set contains a total of 111 presets and Instrument+FX presets (adding reverb, EQ and other effects). Also included are 50 Musicloops with sound elements showcasing the best presets in musical context. 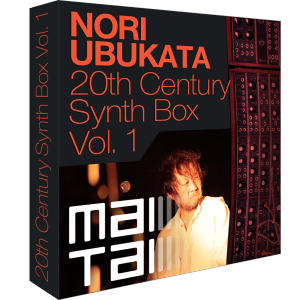 Nori Ubukata boasts an impressive resume. An accomplished thereminist (there aren’t too many of those) and synthesist, Nori has been listed as one of the 1000 greatest composers in Japanese history. He’s composed hundreds of songs for television programs, commercials, and video games in Japan, and has also lent his talents to synth sound design, notably for the Yamaha GS1, their first FM synth. Most recently he has developed many synth sounds for Lady Gaga’s 2013/2015 concert tour, and is currently developing a new theremin-based original instrument.

Click here to buy it from our online store.