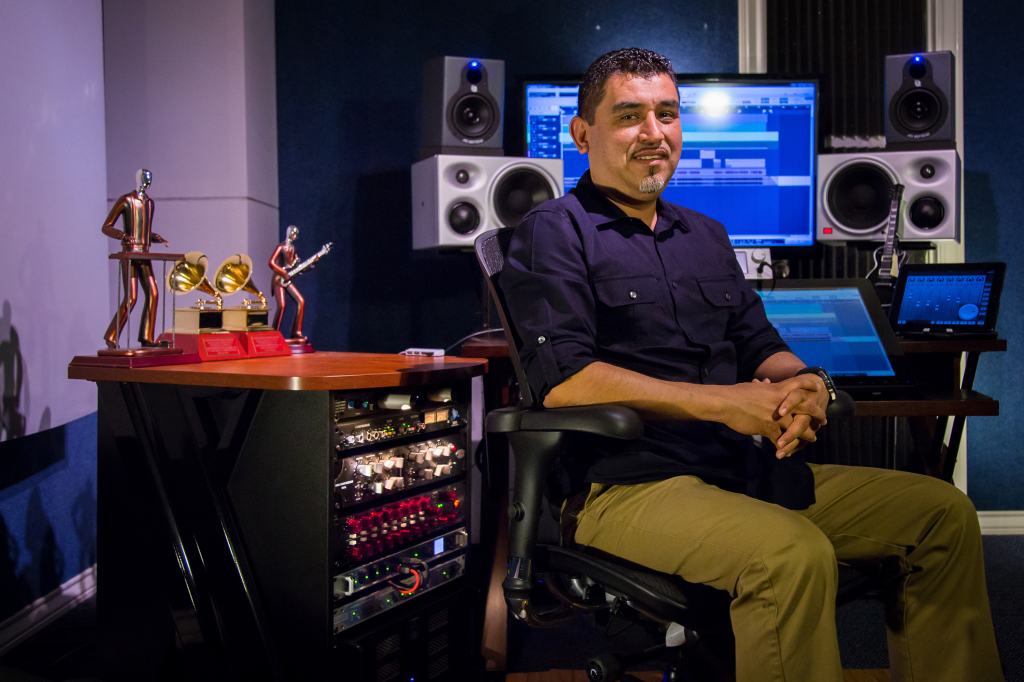 Abraham Martinez in his studio

La Carta Perfecta – En Vivo was a big record for Danilo Montero in 2014—so big, in fact, that it won a Latin Grammy for Best Christian Album. The live album was mixed by Abraham Martinez, pictured above, in Studio One Professional 2.

Martinez is a full time FOH audio engineer for Marcos Witt, a well known worship leader and music artist in Latin America. When not working with Witt, Martinez spends his spare time rackin’ up Latin Grammys. He’s collected three in only four years:

We had the chance for an e-mail exchange with Abraham to get some additional details. While Abraham has been using Studio One—and other PreSonus gear—for a couple of years now, this is his first Latin Grammy award for a project mixed in Studio One. Abraham came into the Studio One fold the same way many users do—via PreSonus hardware.

“Back when I recorded more, I used an an M80 preamp and ACP88,” says Martinez. “More recently I’ve used an ADL 600 for tracking vocals and bass. I also use a StudioLive mixer for its audio quality and ease of use for work on our church campus. I have always associated PreSonus with value, but had never considered them a serious DAW developer until I tried Studio One!

“Now I use Studio One for exclusively for all of my mixes in my personal mixing studio, AMmix,” Martinez continues. “We also use it at our church to to record and mix our plays. The main thing that drew me toward Studio One was it’s incredibly intuitive workflow. It felt natural immediately, especially for mixing. I remember having to go back to my old DAW to finish an older project and hating it as it felt primitive in comparison. What kept me working in Studio One however, was its audio quality and professional features. That is something I just wasn’t willing to give up.

“Studio One doesn’t disappoint,” Martinez asserts. “The drum editing and quantization features are the best by far. I love that there are never problems with clicks and pops and everything stays perfectly in phase. Audio quality and ease of use are Studio One’s strengths.

Martinez speaks from experience when comparing Studio One to other DAWs and workflows.

“I found my workflow to be much faster and fluid in Studio One, as apposed to Nuendo, which I worked on before for many years. I recently did a comparison of working completely ‘in the box’ with Studio One against my hybrid hardware/software setup—and I can honestly say that the differences were minimal. I now feel completely comfortable working completely in the box when I have to!”

“I can’t wait to see what Studio One has in store for us in version 3,” he muses.

Watch the video for Danilo Montero’s “Dios de Amor” below: