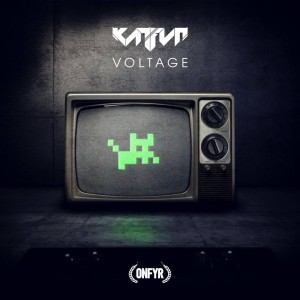 It’s got a little pixel kitty on it.

[This just in from KATFYR, who just released “Voltage“—produced entirely in Studio One! You can (and should) buy Voltage on BeatPort by clicking here. You can also listen to the track below, and check out the video interview to learn a few more details about his production tricks.]

My latest release, Voltage, was produced with Studio One 3 from start to finish. I got to take advantage of many of its newest features.

The new Arranger Track expedited the process of building the entire song structure. It enabled me to easily duplicate whole sections of the arrangement and move them around. The Scratch Pad enabled me to test how different sections interact with each other in order to find the best flow for the track.

I’ve also made good use of the new Effect Splitter feature, particularly in the bus channels for bass and synth sounds, where I was able to pinpoint certain frequencies and apply effects directly to those areas. It would nearly impossible to get the sounds I did using anything else!

Comments Off on .@KATFYR’s Latest Release, “Voltage,” Produced in Studio One, Available now on BeatPort

Electronic music producer, songwriter and DJ KATFYR blew the roof off the walls last year, breaking down his #1 BeatPort hit “Lose Control.” He shared a lot of secrets of how he crafted the electro-dubstep hybrid in Studio One. It was such a hit that we decided to bring him back around for another spin. Here’s his latest work “Everybody,” everybody:

KATFYR on how he made his #1 hit “Lose Control,” in Studio One!

From Musikmesse 2014! The incomparable KATFYR describes the production of his #1 hit on the BeatPort dubstep charts, “Lose Control.”

Here, we take a look at his workflow and some of the methods to his madness. Pay attention, here’s a master at work!

How @KATFYR made his hit, “Lose Control”

We’re happy to report that PreSonus Artist KATFYR’s track “Lose Control” is currently sitting at the #2 spot on Beatport’s Dubstep chart, notably above some guy called “Skrillex.” We’re equally happy to also report that the track was made in none other than Studio One!

If you’ve ever wanted to see what makes a track like this tick, you need look no farther than to KATFYR’s demonstration of Studio One at NAMM 2014, where you can see how “Lose Control” was built from the ground up.

Sincere congrats to a good friend doing good work. If you’re so inclined, why not help him out a bit, and get a copy of the track and bump him up to #1?