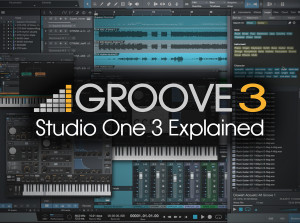 Scott Fritz is back with a new series dedicated to introducing you to Version 3 of PreSonus Studio One! This series will show you everything you need to get started and find your way around.
Scott goes through Studio One 3 inch by inch, covering all the needed basics such as Activation, Audio Device Setup, Creating a New Song or Project, the New Browser Window, User Interface Overviews and more.
Scott then goes into deeper topics such the Tools and Menu Bar, working in the Arrange window, the new Scratch Pad and Arranger tracks, the new Instruments, Recording Audio & MIDI, Working with Audio and MIDI, the Project Page Mastering area and more!
If you’re thinking about making PreSonus Studio One your main DAW, or are searching for an overview of what’s new in this amazing update to Studio One, don’t miss “Studio One 3 Explained!”
Click here to check ‘em out:
Studio One 3 Explained: http://bit.ly/g3s1v3
Studio One Effects Explained: http://bit.ly/g3s1ev3
Product Highlights

.@Groove3 on Drum Sequencing and Programming in Studio One

Groove 3.​ continues the greatness with this, part two of their new series of Studio One production tips!

In this, the second episode of the series, the guys share their secrets on getting human-sounding drum sequences using an electronic drum kit to trigger Superior Drummer and Steven Slate Drums.

Comments Off on .@Groove3 on Drum Sequencing and Programming in Studio One

In this, the first episode of the series, Scott from Groove3 takes a moment to list off what we’ll be learning before discussing how he has the session set up, and taking a full listen to the song that we’ll be working within coming episodes of the series. Check out this incredibly comprehensive series of videos from the geniuses at Groove3. These guys have broken down the StudioLive AI workflow into easily-digestible bite-size pieces. First-time-buyers will find everything they need to get connected and running on the StudioLive AI, while seasoned audio vets can skip straight to the chapter on ringing out monitors.

The incredibly thorough Groove3 has left no stone unturned here, and have also taken on VSL, remote mixing, Smaart wizards, and the AI family’s integration with Studio One.

Click here to check out the StudioLive AI series from Groove3 with some free videos. Enjoy! Check it out! Our good friends at Groove3 have just launched a great video tutorial series on the new StudioLive AI digital mixers! This thorough overview will show you all the StudioLive AI essentials and beyond, all in trademark Groove3 style—It’s like having a pro audio coach right there at the mixer with you.

Click here for a free video on using the Talkback mic: