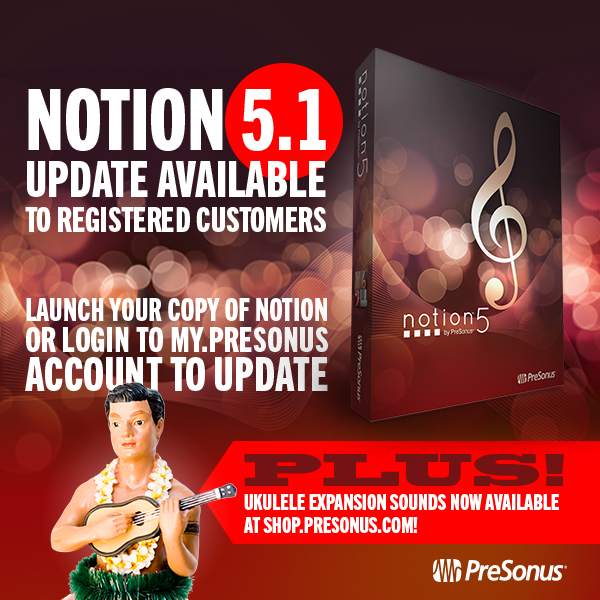 We’ve got an update to Notion to announce today! You can click here for the full list of changes, but here’s the long and short of it: You can now open exported audio stems from Notion in Studio One, with automatic track names, volume, pan, rehearsal marks, and initial tempo and time signature information. Additionally, we’ve made the usual batch of bug fixes, including SoundCloud uploading and adding instrumental techniques for the new Woodwind and Brass expansion packs to display in the palette.

All you need to do to install the update is launch your existing copy of Notion, and you’ll receive a prompt to download the update. To update from My.PreSonus.com, sign in and click on Notion in the “My Software” category. Next, click “Download Notion 5 Installer.”

We’ve also made a FREE demo of Notion 5.1 available to all via My.PreSonus.com. You don’t need to own a PreSonus product to get the Notion demo, just create an account, sign in, and click the button that reads “Click here to try the Notion 5 Demo!” Enjoy, and tell your friends!

Last but not least, we’ve released a Ukulele expansion for Notion and Progression that is available at our online store by clicking here.  The Notion Ukulele was recorded by David Doucet on a Collings soprano ukulele, and includes sample variations for open strings, picked or plucked notes, and both up and down strokes. It’s available standalone or as part of the Acoustic Bundle Pack alongside the Mandolin, Fingerstyle Acoustic Guitar, and Banjo.