Nimbit Artist of the Week: Crystal Bright and the Silver Hands! 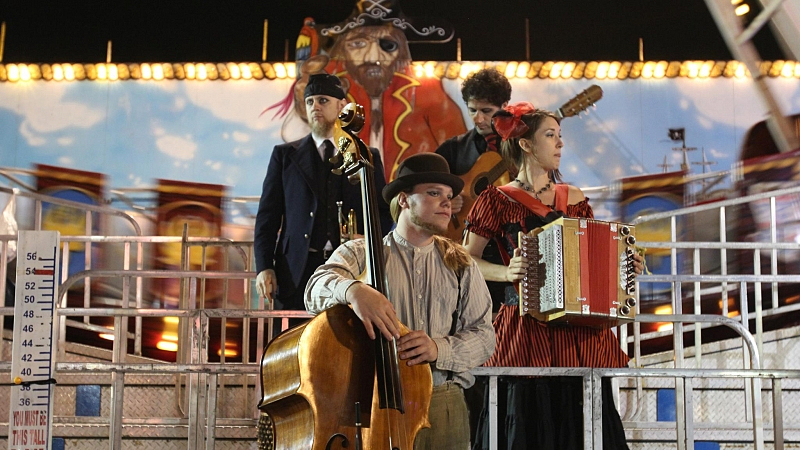 The music of Crystal Bright and the Silver Hands is the sort that can only begun to be described by listing other styles of music. First, start with old-timey. I could name-drop Gogol Bordello, Jason Webley, The Crow Quill Night Owls, and other carnivalistic freight-train drifters and associated rattletrap ruckus. There’s certainly a horizontal stripe of Burton/Elfman-via-Django Reinhardt-bonkers in there. The band calls their sound “Kaleidophrenic Cabaret,” I call it “a colony of bats drunk on apricot moonshine set loose upon the Stringband Jamboree.”

As you may have now surmised, the best way to really understand their music is to simply listen to Crystal Bright and the Silver Hands. And listen in person, if you get the chance, because this infectious, colorful, high-strung band is all about the live show.

While the Silver Hands are indeed no joke, bandleader Crystal Bright is a force unto herself, a globetrotting multi-instrumentalist with backgrounds in Ethnomusicology and Anthropology. As such, no instrument or singing style is far from her grasp, and many are leveraged on their recordings: accordion, singing saw, piano, concertina, and a Ugandan harp called the adungu are all listed on her sonic CV. I imagine she can also play a bunch more that I’ve never heard of.

Crystal is taking advantage of the complete PreSonus/Nimbit solution. Every song on the latest album, The Absolute Elsewhere, was inspired by and written to a piece of art by Rusty McDonald of DividingME Photography. She pre-released the album on Nimbit, and also used the AudioBox Stereo and Notion 5 while writing for the record. You can download “The Fall of Seraph,” the first single from The Absolute Elsewhere for FREE by clicking here.

Their Silver Nimbit Store has five CDs available for purchase—in HD, no less, so you’ll really hear the airiness in those washboard solos. There’s also t-shirts, hand-made mugs, a poster, and an innovative USB drive option that includes their entire discography, including artwork and lyrics, no discs required.