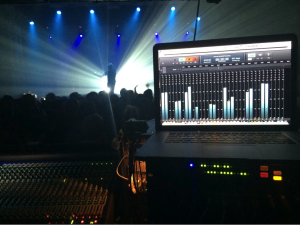 Well, Mark Williams is back from Chicago, and is pleased to report that The Cold Waves music festival was a smashing success. The show was attended by nearly 2,000 people, and thousands of dollars were raised for Hope for the Day, a non-profit movement dedicated to utilizing music and the arts as a defense mechanism to suicide.

Mark recorded the entire show via the new StudioLive RM32AI, and the recordings have been mixed and polished by Jason Novak and sound great. They’re now available for purchase on Nimbit! All told, there are 12 full sets to choose from, broken down by artist, and there’s also a compilation CD featuring songs from all involved, and Cold Waves t-shirts up for grabs. You can also click here to get the 4-song Cold Waves sampler promo, absolutely free! Proceeds from the Nimbit sales of the show’s recordings will also be going to benefit Hope for the Day. These are exclusive, can’t-get-’em-anywhere-else-not-even-Bitorrent tracks! You can get any track for $0.99, the price for a band’s entire performance is relative to the length of their set, but is always a better deal than buying each track individually.

The lineup was a great mix of stalwart lifers like Front 242 and Die Krupps, and new blood like the Author and Punisher and Youth Code. The full roster includes:

We’re not done with Cold Waves just yet, by the way. We’re in the process of editing together the whopping 60 gigs of video Mark brought back from Chicago, which includes interviews, live performances, and I imagine a surprise or two. Stay tuned!

The Cold Waves music festival is a nonprofit event held in Chicago to raise money for the Hope for the Day, a non-profit movement dedicated to utilizing music and the arts as a defense mechanism to suicide. This years’ event just concluded, with stellar performances from Front 242, Fear Factory, Die Krupps, and many more. The event was a smash success, with over 2,000 attendees at the festival over two days, including over 100 musicians from all over the planet.

Mark Williams recorded the entire show on the new StudioLive RM32AI—the bulk of the recordings are being mixed as I type this, but for now you can click here to get the 4-song Cold Waves sampler promo, absolutely free! Rest assured that more will be up and available on Nimbit very soon, where sales will go to benefit Hope for the Day. We’ll let you know when that happens.

PreSonus donated some gear for Cold Waves’ silent auction, including two AudioBox Studios, two  pairs of Eris 4.5 Monitors, one pair of Sceptre S6 monitors, three Temblor T10 subwoofers, four copies of Studio One Professional, some of which were autographed by the festival’s performers.

But just because the Cold Waves show is over, doesn’t mean the story ends here—Mark recorded the entire proceedings including a ton of interviews with Jason Novak and David Shock, Martin Atkins, and more. There’s much more coming—accoring to Mark, “about 60 gigs worth of video and 16 hours of audio.”