Latest @BrianBotkiller Album, “In Case of Revolution,” Produced in Studio One and Available Now! 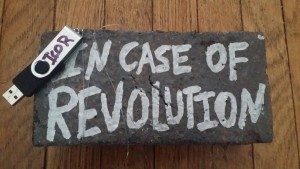 [This just in from PreSonus artist and good friend Brian Botkiller. His latest record was produced on a StudioLive and in Studio One!]

For my new record, In Case of Revolution, I tracked all my vocals and did all of my mixing in Studio One, as well as instrumental tracking.  I began the record in the Studio One 2 era, but I finished the record in Studio One 3.  I also mastered 52 songs in Studio One last year bfor a project I was part of called “Weekly Beats,” which challenged participants to write and release one song per week in 2014. I managed to finish the project, and Studio One was integral to that. It was so easy to take stems into Studio One, mix them, then go into the Project section to begin the mastering process. I built a template which I was able to start from, which made the whole process much easier.

I also used my PreSonus hardware in these projects, namely my StudioLive 24.4.2 for an audio interface during tracking, and my Faderport for fader control while mixing. Both are very important in my Studio, which is based around a PCAudioLabs pro audio computer running Windows 8. I composed many of the songs in Ableton Live using Ableton Push. Using Ableton in conjunction with Push hardware and Studio One really made making this record much, much easier.
In Case of Revolution is a protest and battle record.  It is a mix of Electro, Progressive, and Techno. The title track features Jon Fugler of the awesome progressive techno group Fluke, as well as Corrupt Frame and LithoChasm. “Battle Cry,” another of my favorite songs on the album, features vocals by my wife, Joy Coy. I also play the drums on the record on some songs, namely my Ddrum Dominion kit on “Warpath,” which I recorded in Studio One using my StudioLive 24.4.2 and Blue and Samson mics. There’s also a great mashup/remix of my song “Welcome to Postwar USA” by my friends at Rubion 7. Everything was tracked and mixed in Studio One.
The record is self-released (for now) on a USB stick attached to a hand-painted brick, limited to 100 copies. It’s a piece of art, as I believe that music is indeed very much art. I also love tangible representations of music, but I do not plan to make CDs for this release, the record is not being sold via iTunes, Amazon, or the like, and it is not on Spotify at this time. It is only for sale via BandCamp and when fans get directly in touch with me at http://www.brianbotkiller.com
I believe that we, as artists and musicians, need to insist on some value of our art.  t doesn’t make us sell-outs; it simply means that we do want to be able to keep making our work.
PreSonus is very important to my workflow; I work very fast using PreSonus gear, and that’s what I love about it—getting the job done!
The new record can be purchased at http://brianbotkiller.bandcamp.com

In Case of Revolution

Comments Off on Latest @BrianBotkiller Album, “In Case of Revolution,” Produced in Studio One and Available Now!

Brian Botkiller Brings the NerdCore with Studio One, Shares Tricks

[This just in from good friend and four-star general in the war against the machines, Brian Botkiller! He shares his latest track, “Morphogenic Residents,” and details some of the methods to its particular brand of oddball. When not repairing his Buddy Holly glasses with gaff tape or tracking down elusive rhymes for “morphogenic residents” and “triskelian,” Brian Botkiller is one of the main guys at OBEDIA, who have been slingin’ their brand of world-class recording technology training to the masses for nigh on ten years now. Strongly recommended.]

I usually record and mix/master in Studio One, but I don’t do a lot of virtual instrument work, so I wanted to do a track entirely in Studio One and explore it a bit more. MC Tahina is an old friend and part of one of my favorite bands of all time, The Gluey Brothers. He wanted to do a track together, so I had him come over to Botkiller studios. He showed up, and while walking him in I said, “I’ve got the drums set up, and you can plug your guitar into Studio One if you want.”  He said, “I’ve only got lyrics,” which I thought was awesome. So, we needed a beat. I opened up NI Battery and Impact, and laid down a quick beat, then did some overdubbing with my DDRUM Dominion kit. I wanted to fool with the timing on the audio and MIDI, so I quantized it in some crazy ways and got a cool groove out of it without having to do more work, because Studio One does everything in the blink of an eye.

Next, Tahina did his vocals. I plugged straight into my PreSonus FireBox, my favorite audio interface of all time, and gave him a click and headphone mix, and he just went for it. We had vocals in minutes. I then opened up some previously saved channel strip presets (another favorite S1 feature,) and had a vocal mix in no time. We then laid down the bass, using Native Instruments Kontakt. Tahina did those, on the fly, on a MIDI keyboard straight into Studio One. I did some edits here and there, quantized fast, and boom, bass done. Here’s some video:

I wanted something else in the track, so I took out my turntable, dropped a plate on it, ran it into my FireBox’s SPDIF input, and did some scratches. I’m no Mix Master Mike, but I really liked how they added to the track. We then sat down and just mixed organically,  with me laying down some light backing vocals and other little bits. He was really impressed with how fast Studio One allowed me to work. I got everything done fast, and then jumped into mastering in the Project pane, and my song was done.

This was great because the weeklybeats project (http://www.weeklybeats.com) requires me to write, produce, and record a song per week. It has to be turned in by Sunday at 6pm MST, and I really like the project. It’s not a competition or anything, but just a personal challenge—by the end of the year, I should have written 52 new songs! I wanted to do it to get myself into the practice of writing faster, and releasing fast, instead of agonizing over a track forever. It’s really opened my mind and made me work fast and be creative. This is why Studio One is always in my workflow; I can’t do fast production like this in any other DAW, hands down. It’s the fastest daw in the west, east, or anywhere else.

As always, thanks for what you do and for being awesome.
Hear the track below.