Get a limited-edition AudioBox iOne Platinum for just $69.95 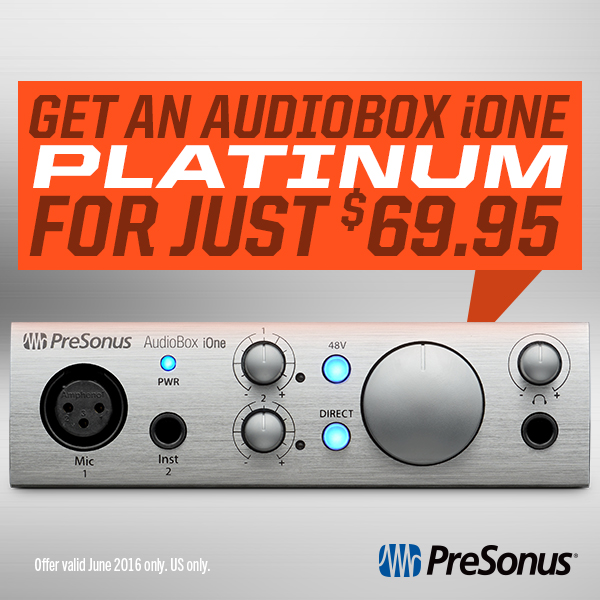 Are you the sort of singer/songwriter who wants an AudioBox that matches that nice brushed aluminum look of your laptop perfectly? Look no farther than the AudioBox iOne Platinum—a limited-edition run of our most portable of portable interfaces. And ONLY in June of 2016, these gorgeous li’l units are down from $99 to $69.

The AudioBox iOne allows you directly record an instrument of choice and a single XLR microphone simultaneously, which is what makes ideal for the singing guitarist crowd. Just connect your guitar to the 1/4″ input on the front, your mic to the XLR port on the front, and connect the AudioBox to your computer via USB. Using the included Studio One 3 Artist software, you’ll be up and running and demoing your next (or first) hit in a matter of minutes.

And to keep things extra-portable, you can also record via the iOne to your iPad running the included Capture Duo software. Capture files can be wirelessly transmitted to your main workstation and opened up for editing in Studio One. All told, everything you need to record a song will fit in a shoebox.

Not that we recommend keeping it in a shoebox. Be nice to it, it’s shiny.

Comments Off on Get a limited-edition AudioBox iOne Platinum for just $69.95

More than just audio interfaces, the AudioBox iOne and iTwo are the heart of a creative workflow aimed at taking your inspirations and turning them into finished songs. Tightly integrating award-winning hardware with powerful software across working environments, watch recording artist The Hitchhiker (Luis Mariani) go from iPad to laptop to finished master—ready for purchase and download by your fans.

Mariani left Venezuela as a political refugee and, now an American citizen, lives and works in Louisiana bayou country, where he put together a band of self-described “good ol’ south Louisiana music scene boys” and makes hard-rocking music with a message.

This webcast will air on March 26, 2015 at noon Pacific time. Click here to register!

A great video review of the AudioBox iOne from Interactive Guitar Magazine! Thanks guys!