PreSonus and Nimbit at SXSW!

In Austin for SXSW? Check out this event!

PreSonus and Nimbit are proud to sponsor this showcase on Wednesday, March 13 at CTC Garden in Austin, which includes live performances from The Moth & The Flame, SIX60, The Royalty and The Rocketboys as well as a special screening of Butch Walker’s award-winning documentary “Out of Focus.”

We will be showcasing FanCheck.In, offering free downloads of the live performances! 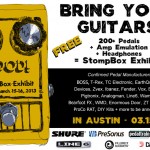