Join us for PreSonus LIVE on Thursday! Justin will be showcasing the PRM1 measurement microphone and the Smaart Wizard functionality that is included in the StudioLive 16.4.2 and 24.4.2 mixers.

Learn how to use Smaart Spectra to fine tune your live rig to your environment. We’ll also take a look at ringing out your stage monitors using Smaart features. A world of PreSonus product coverage from MusicStore TV at Musikmesse 2013!

Wow, MusicStoreTV really got all the good stuff from our presence at Musikmesse! Check out the videos below for coverage on our new Eris and Sceptre monitors, the StudioLive 32.4.2AI, our StudioLive AI PA Systems, and the ADL 700 channel strip!

Big big thanks to the MusicStoreTV team and Rodney Orpheus for this exceptional coverage.

[This just in from Jan-Arend, StudioLive Wizard at Large and Executive Cable Manager.]

Want to show you something. I saw Big Joe Daddy’s Big Multi-Pin Panel-Box Thingy post on the PreSonus blog. It looked very professional! I too use the StudioLive 24.4.2 on various occasions and locations.
We all want to get the best mixing position for our bands and the easiest place for the console. But having said this, we all know that having at least 30 cables to the mixer on the other end of the stage isn’t easy. It gets messy. So I wanted a flexible solution for my band(s).
One band is very different from the other. One is almost completely acoustic, with 3 vocals, acoustic/electric bass and guitar, accordion, and drums. We use two auxes for wedge mixes. The other band is completely electric, with 3 vocals, drums, electric piano, guitars, and basses. No amps on stage, and four stereo in-ear mixes for monitoring. My StudioLive is also used in churches and other events.

I wanted to make a flexible and very compact snake-system that I could use in both situations. I wanted to have the possibility to get all 24 channels from the stage to the Studiolive, and to get the main and subgroup-outputs plus all the aux outputs back to the stage. Ordinarily, this would require a single 40-channel snake. Everybody knows that these cables are heavy, and not easy to use at all. And every time, I would have to plug in 40 cables into my mixer.
Now my solution:

I had a 30-meter 16.4 snake for a couple of years, and I thought, ”Why not have two of these 16.4 cables, with multi-pins in the mixer case?” So, I bought another 16.4.2 multi-core cable to make a total of 40 channels.
I keep my StudioLive 24.4.2 in a Thon mixer case, from Germany. This case was made for the SL and it fits perfectly. Nice thing about this case is the “semi” doghouse configuration. This gave me room to mount the multi-pin connectors in the case. It took me a week or two to make all the connections and to change connectors of the second stage box. Stage box one has 16 inputs and four outputs (A, B, C, and D). Stagebox two has eight more inputs, all 10 aux outputs from the mixer (with Neutrik combo sockets) and two more outs, E and F. This all gives us 24 inputs on the StudioLive and 16 outputs from the mixer on stage.
With our acoustic band, I only need one snake, and with the other band I use both snakes. Now we can put the mixer anywhere we like, setup time is much quicker than before and we don’t have to carry very heavy cables.
See the attached photos for the result. Maybe this helps other StudioLive users to get ideas about their set-up.

“De Duifies” are singing Dutch songs from a very popular tv series “ja zuster nee zuster” back in the sixties in the Netherlands.
De Duifies: http://jazusterneezuster.com
http://www.facebook.com/heine214
“Spoetnik” started in 1980 and plays mostly covers nowdays.
http://www.facebook.com/pages/Spoetnik/297310313699106
https://soundcloud.com/jan-arend-blok
thanks and best to you too!!

This just in from a friend of a friend… They spotted a StudioLive 24.4.2 in use at the Big Game’s Media Party! Thanks! 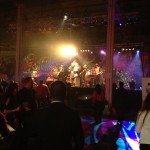 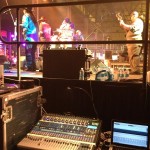 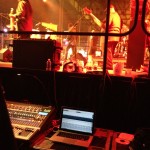 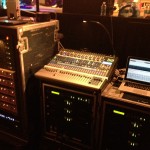 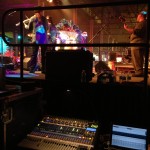 You’ve Got it Covered

We’d prefer a photo of the mixer, not the box, but if your photo is this awesome it just may qualify.

Over on our Facebook page, one of our most popular albums is our ever-growing collection of PreSonus User Studios. There’s some great comment threads there in addition to some cool photos, obviously.

So, in the spirit of all things social, we’d like to share your photos of your handsome face and your StudioLive mixer with our Facebook community. If you’re glad to be a StudioLive owner and feel like representing accordingly, now’s your chance!

We want to see some photos of smiling StudioLive owners. If you kind folks are feeling shutterbuggy, we will pick a user-submitted photo for our Facebook cover graphic—once every couple of weeks or so. If we pick yours, we’ll get in touch—and we just might send you a highly fashionable PreSonus T-shirt.

It’s easy to be a contender. Here’s all we ask:

Keep in mind that in order to qualify for the cover photo treatment, the image must be at least 850px wide by 315px tall.

Photos that are really interesting, funny, or astonishing will of course be given preference.

Check it out! Paul just wrapped up this great set of five videos describing the latest and greatest Rational Acoustics technologies that can now be added for FREE to the StudioLive 24.4.2 or 16.4.2 mixer that you already own… or the one you’re thinking about getting.

Try each of these features once, and you’ll wonder how you ever lived without them.
John Mills on The Smaart System Delay Wizard: