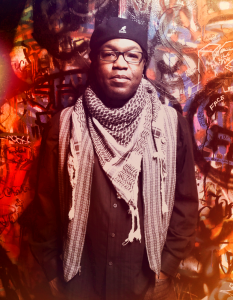 [Jakubu Griffin is truly one of Las Vegas and NYC’s most versatile drummers. Son of trombonist Dick Griffin (who played with the legendary Rahsaan Roland Kirk), he has been surrounded by music from an early age. Growing up with many musical instruments and influences around him, he was always drawn to percussion and can remember playing the drums as early as age 3 or 4. He started studying classical piano at age 5, and later added the trumpet.

Jakubu has performed and led groups all over the world. While living in Las Vegas in the early 2000s, He was featured in David Cassidy and Sheena Easton’s “At The Copa” at the Rio Resort. After that, he was musical contractor and drummer on a show featuring Chaka Khan, Peabo Bryson, and Melissa Manchester called Signed, Sealed, Delivered: a Celebration of Stevie Wonder’s Music at the Venetian Resort. 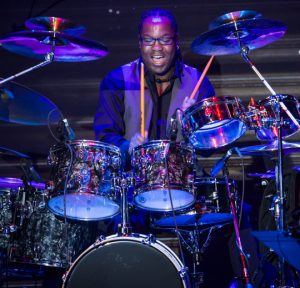 Griffin has also been a musical director for Kings Productions, as well as Norwegian and Premier cruise lines. Back in the NYC area where he grew up, he has performed and recorded with award winning jazz trumpeter Dave Douglas, Ryko/Warner recording artist Matt White, and Broadway stars Tracie Thoms (Rent, Case) and Shoshana Bean (Wicked). Jakubu is currently playing with the legendary Las Vegas singer Clint Holmes. He was also the house drummer for Cirque Du Soleil’s production of Zarkana which premiered at NYC’s world famous Radio City Music Hall in June of 2011, moving on to Madrid, as well as having a historic run at the Kremlin Theater in Moscow in 2012. Jakubu’s powerful, yet very musical drumming reputation has been highly appreciated by many musicians and music lovers both here and abroad.

When not on the road, he’s kept busy at home recording and teaching. But, with the recent stay-at-home measures implemented due to COVID-19, working in his own studio has become his primary focus.

Jakubu has graciously given us a virtual “walk-through” of his home studio environment, where the StudioLive 24R is the centerpiece and his dedicated audio interface to his DAW of choice, Studio One. Let’s check out his setup and how he’s been using our products in action at home.] 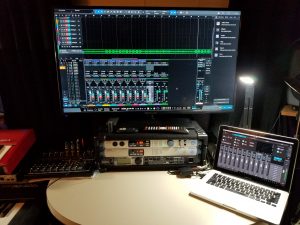 Jakubu: My first audio interface was the PreSonus Studio 192 along with the DigiMax DP88. As a drummer, I need to have at least 8 channels dedicated to drums in my space at all times for my own use. With the Studio 192 and DP88 giving me 16 total channels and great preamps, I was able to stack them in a rack and run my 8 drum channels into the DP88 using the Studio 192 rear channels for my keyboards, bass, extra drum channels etc. and even leaving the 2 front channels open for a vocalist or instrument to plug right in. As my studio evolved, I graduated to the StudioLive 24R rack mixer, as well as the NSB 8.8 AVB Networked Stage Box to expand channel inputs in my other rooms. 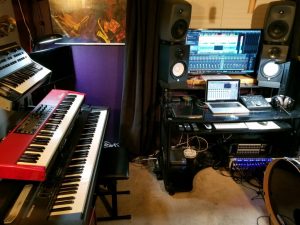 Since I don’t have the space for a console mixer on my workstation, the StudioLive 24R is the perfect solution for me with UC Control as my console. I use the HP60 for 6 stereo headphone mixes. With a router plus the network control via Wi-Fi of the StudioLive 24R, my clients have the option of using the QMix-UC app to control their own headphone mixes. The PreSonus Monitor Station allows me flexibility to switch between my different sets of of studio monitors and speakers, and also gives me 4 more headphone outputs if needed. I’ve used other DAWs, but I’m completely sold on Studio One Professional because it’s just more user/musician friendly. I understood more about using Studio One in 24 hours than I’ve learned on other DAWs after countless months of usage. I’m a musician first, not an engineer.

Jakubudrum Studios is my home as well as my recording space. I have three isolated rooms on one floor. I have eight CCTV cameras installed, and video monitors in every room for visual communication. My main “studio” room is my acoustically-treated drum and keyboard room, as well as my control booth. 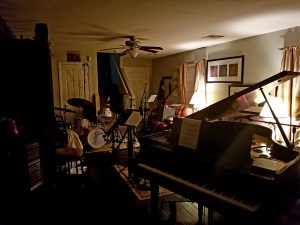 My living room is my large room and features my Baldwin L grand piano. My smaller acoustically-treated room is great for acoustic bass as well as other instruments, and it also serves as a vocal booth and isolated amp miking room. I’ve done several live recording sessions in the studio with different configurations ranging from solo piano to live strings… and various band sizes, genres, horn combinations, etc. I do a lot of drum and percussion tracking for projects myself, but I’ve also engineered tons of keyboard track layering sessions, instrument tracking sessions, vocal tracking, and my space is perfect for tracking bass and drums together. I record voice-overs as well, and I’m currently producing an audiobook session.

Now that I have the StudioLive 24R, I have the luxury of using 14 dedicated drum channels just for myself. I usually use two different sets of overhead mics simultaneously, another stereo room mic, and a subkick along with my normal kick, snare, hi hat, and tom mic combinations. 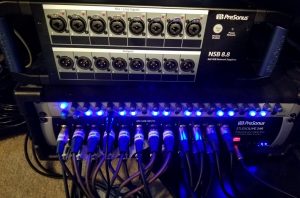 I also use seven channels for my keyboards, and a channel for my bass amp to run direct with a pre amp. I use the NSB 8.8 Stage Box in the other rooms to mic the piano, horns, strings, vocals, etc. I use the 12 outputs from the 24R mixer to sum 2 outputs to each of the 6 stereo inputs of the HP60 headphone amp and made them stereo mixes from UC Control. Again, I have a router connected to the 24R mixer and a network setup so people have the option of using QMix-UC to control their own headphone mixes. I have two sets of studio monitors, but I also have small PA for the keyboards, rehearsals, gigs etc. The monitor station is actually one of my favorite pieces of PreSonus gear to be honest. I love the versatility I have with 2 sets of monitors, but I even use the PA as a 3rd reference sometimes. The Monitor Stations onboard talkback routed through the HP60 is perfect for my setup, plus I’m the type of guy that just needs a big volume knob in my life since I don’t have a console.

So, funny story: I actually learned about PreSonus through another drummer, Dre Boyd, who is also an Artist with them. We both met and quickly became good friends working for the Cirque Du Soleil company. I finally had the space and needed an interface to start getting into recording and he highly recommended the Studio 192 and DP88. I’m an impulse buyer, but he told me to wait so he could “hook me up” with his representative at PreSonus. Well I’m impatient and went ahead with the purchase of the interfaces anyway. I was ecstatic, but then a couple weeks later Dre let me know that the PreSonus Artist Relations Manager was none other than my college buddy, Perry Tee… so I should have waited!!! Not only do I love the products, PreSonus reconnected me with an old friend, who happens to be on guitar in this video below that we produced remotely with 4 other buddies using Studio One Professional:

I love the power and versatility that I have with the StudioLive 24R mixer, especially for low-end instruments. Now I have the ability to mic an acoustic bass and get a warm, powerful tone without any need for a DI or outboard preamp. Its considerably better for my drum miking as well. I get better headphone mixes, and I have plenty of room and power to hear my kick drum perfectly which can be a problem in regular interfaces without external pre amps. The ability to control mixes across Wi-Fi is a true bonus allowing my clients the flexibility to control their own mixes with QMix-UC. The HP60 is a great solution for my headphone needs with 6 channels, and stereo mixes plus the Monitor Station is one of my favorite additions to the studio, and has made my work flow much smoother and faster. The onboard talkback is perfect for my space. Studio One is absolutely the best DAW available, in my opinion. I know has everything I could possibly need for my studio. Everything in my setup works seamlessly. I couldn’t be more satisfied with the sounds, and results I get with my gear.

Every piece of gear is perfectly matched and catered to the needs of my workflow and studio ecosystem… thank you, PreSonus!

[Incidentally, from now until Aug 31, 2020, anybody who buys a qualifying StudioLive Rack Mixer will get a PX-1 microphone for free!] 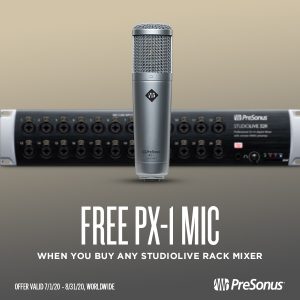 Comments Off on Jakubu Griffin: using the StudioLive 24R as a USB Audio Interface