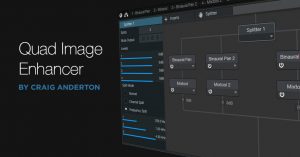 Studio One’s Binaural Pan processor can widen, or narrow, an instrument’s stereo image. Aside from making “bigger” sounds that fill out the stereo spread, it also has practical applications. For example, you can  spread out a thick stereo synth pad, or a guitar feeding two cabs in stereo, by turning the width control clockwise from the center position. This opens up more room for vocals, kick, snare, bass, and other centered elements. Binaural Pan can also do the reverse—like narrowing a wide, stereo synth bass part to focus it more—by turning the Width control counter-clockwise from the center position.

For mastering, Binaural Pan can make mixes seem larger than life. However, it’s not necessarily a “one-size-fits-all-frequencies” solution, because you might want to spread the highs as far as possible, but narrow the bass, and add only a little bit of spreading to the upper mids—so let’s make ourselves a multiband image enhancer.

This Quad Image Enhancer FX Chain is ideal for mastering, as well as for working with individual instruments. Fig. 1 shows the modules. The Splitter splits the audio into four bands: Low (below 250 Hz), Low Mid (250 Hz – 1 kHz), Hi Mid (1 kHz – 4 kHz), and High (above 4 kHz). Each of these goes to a Binaural Pan to control the image, and a Mixtool to trim the level (-6 dB to +6 dB). 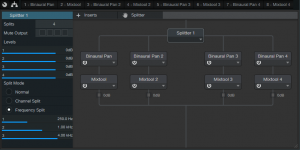 The split frequencies are arbitrary. You might want to move them around, although the ones in the default multipreset work well with a variety of music.

The Control Panel (Fig. 2) accesses all the needed parameters. Enabling the Mono button is like turning Width fully counter-clockwise, but being able to switch this provides a convenient diagnostic tool for quickly comparing a band’s sound in stereo or mono. Similarly, enabling Bypass makes it easy to hear the effect that widening (or narrowing) has on a particular band. If you need to mute individual bands so you focus completely on one or two bands while editing them, open up the FX Chain, select the Splitter, and mute the desired output(s) in the edit window’s upper-left corner.

How to Use It

When the Width controls are centered, they don’t affect the sound. You can crank up the widths for a wider sound, but you can also be a little more strategic. The following audio example plays an excerpt of mixed but unmastered  audio, followed by the same excerpt going through the Quad Image Enhancer. For this application, the Lo band is narrowed, Lo Mid unchanged, Hi Mid widened slightly, and Hi widened all the way.

Note that unlike some delay-based widening solutions, this FX Chain doesn’t cause any comb filtering-induced “phaseyness” if collapsed to mono.

Although there are some excellent third-party multiband imaging plug-ins available, you don’t need to go outside the Studio One ecosystem—just download the multipreset, and you’ll be ready to widen, or narrow, your stereo image.

Discovering new sonic universes to explore is what being a musical artist is all about!

Let’s dive into RMB Justize’s discussion about his worlds of sound, and how he does it all with PreSonus Sphere: 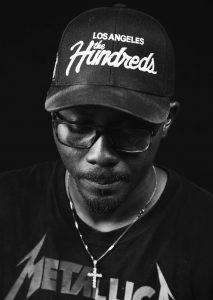 “Versatility and persistence are a deadly combination of characteristics. They are much-needed weapons to have in an artist’s arsenal.”

Based in Chicago, IL with ties to the DMV area… Taylor Gang’s in-house producer Ryan “RMB Justize” Baker grew up in a musical household, his mother being a classical violinist for the Chicago Sinfonietta, exposing RMB’s ears as early as six years old.

“I caught the music bug from Mom, for sure. I remember turning 11 or 12 and having nothing but a voice recorder and a Yamaha DJX keyboard. Skateboarding was the thing back then, with influences ranging from Sum 41 to Incubus to The Neptunes and Noreaga. A couple of years later I finally dove into making music with computers, using every piece of software I could get my hands on until now. But… then came PreSonus Studio One, which changed it all for me.

“The interest came from an artist I worked with at the time—he wouldn’t stop mentioning it! After spending countless months into years on ProTools, FL Studio and Reason, I wanted a program that could do it all. I’m a religious template maker, as most are, so the workflow determines the imagination most if not all of the time and Studio One takes care of the madness with ease. Let’s just focus on the music and pushing envelopes more than finding where to click certain stuff. PreSonus did it right, ranging from AudioBox interfaces I’ve owned in the past, all the way to the new Quantum which gives me more than enough power to control the room.” 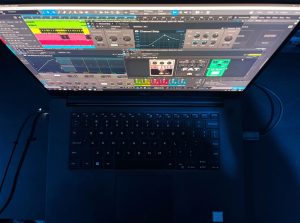 Since the premiere of Studio One version 5 in July of 2020, RMB has become a power user… eventually convincing a few fellow producers and artists to try it, if not make a full switch.

“There have been times where I’ve walked into big label studio sessions and people look confused because they’ve never seen Studio One in person! Once I show my way of doing certain things, using certain plug-ins in certain ways, they’re overly surprised. It’s hands-down the fastest program, which lets me flex my mind-work and turn my rough thoughts (even voice notes) into full records. I’ve had people come to my studio for sessions and look surprised when they ask why I use it. You have to try for yourself to find your workflow.”

Honorably noted, PreSonus Sphere has made his processes for online collaboration, recording, mixing, and mastering an album-quality one-stop-shop, helping the migration become a breeze. Especially during times of a pandemic where people can’t communicate like they normally would, it’s a necessity.

“I think all DAWs should have an ecosystem such as PreSonus Sphere, whether you’re just getting started or an A-list musician. The tools available make it seamless to share files and keep up to date on things like deadlines and most recent notes/mixes, rather than scrambling through emails and hard drives (which we can all relate to, I’m sure). Having that system in one spot, one site, one page, actually kept me in line when finishing a label record and staying up to date without confusion.” (Chevy Woods—Since Birth)

Recently focusing more on production and audio engineering as well, the AAF import feature has been a godsend. 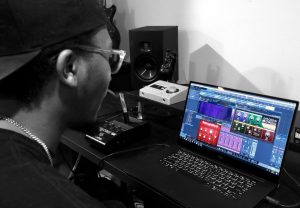 “I still find myself walking people through how to convert sessions to AAF rather than tracking out. There is no other program that will line the session up identically with automation and fades, to say the least, which saves more time than I expected. That’s just a small piece of my realization, of how capable this DAW is. Cheers, PreSonus!”

Since the start of the COVID-19 pandemic, RMB’s main focus is to create cutting-edge music, knowing he has the perfect DAW to do so, with no issues.

Comments Off on RMB Justize: Music Of The (PreSonus) Sphere

Create while you isolate! Save 30% on Studio One and Notion!!

UPDATED 5/1/20 – we’ve extended this sale through the month of May!

Create while you isolate! Studio One and Notion give you all the tools you need to record, produce, and compose at home and they’re both on sale UNTIL THE END OF MAY! 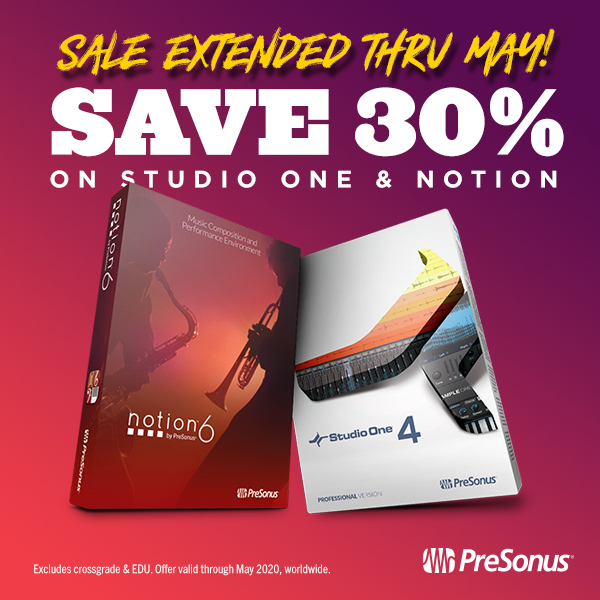 From April 1- May 31, save 30% on Studio One Professional, Studio One Artist, and Studio One Upgrades plus Notion. This offer is available worldwide.

Be safe, be inspired, and keep creating.

NEWS FLASH – FIFTY-SIX Add-ons are 50% Off this Week ONLY! 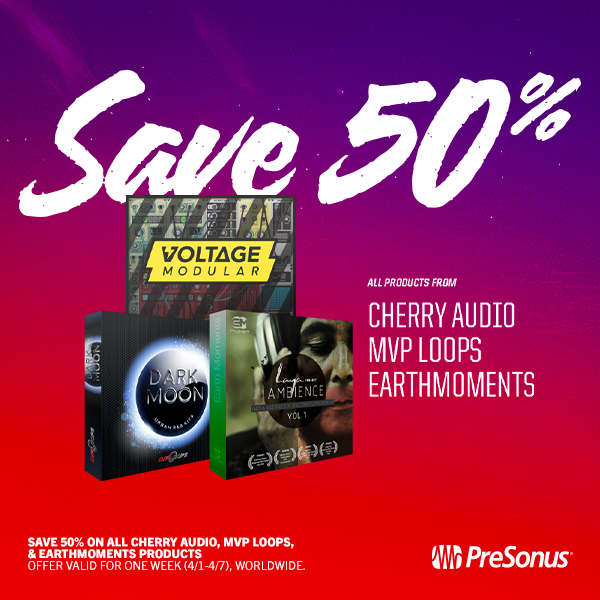 It’s a great week to be a PreSonus customer!

Start saving today through April 7 on all Cherry Audio, MVP Loops and Earthmoments products right out of the PreSonus Shop! That’s 56 Add-ons all with a 50% discount for only ONE week!

SynthAnatomy.com says Voltage Modular is the:

MVP Loops provide some of our most popular, top-selling loops and their whole collection is half off right now! Some of MVPs greatest hits include:

Are you getting a little burned out on bass, guitar, and drums? Need some special flavor for that short film score you’re working on? It could be that a little bit of Celtic Harp or Arabic Percussion is exactly what you need. And if your EDM mixes are starting to sound a little stale, Dubstep India is sure to make your tracks stand out from your competition.

This offer is valid worldwide and runs April 1 through April 7, 2020.

Comments Off on NEWS FLASH – FIFTY-SIX Add-ons are 50% Off this Week ONLY!