Get Studio One Prime and the Studio Magic Suite when you buy a PreSonus Studio Monitor! 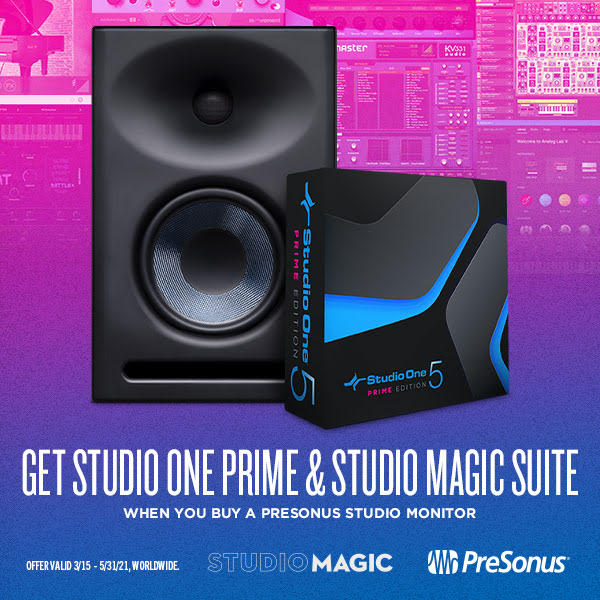 Now through the end of May 2021, get Studio One Prime and the Studio Magic Suite when you buy a PreSonus Studio Monitor—over $1000 USD worth of software!

Thinking of upgrading your speakers? Maybe you’re looking to up your audio production game? Maybe both?!  Well, there’s never been a better time to get some new speakers from PreSonus, because if you buy one before May 31, 2021, we’re going to throw in Studio One Prime and the Studio Magic Suite.

No matter your sonic demands, PreSonus has studio monitors for you, ranging from the small-footprint, Bluetooth-enabled Eris E3.5 BTs, all the way up to our top-of-the-line coaxial Sceptre S8s. You can browse our monitor offerings here.

The Studio Magic Suite is a bundle of music creation software, plug-ins, lessons, and loops that would cost over $1000 USD if purchased separately. We don’t have room to talk about them all in great detail here, but here’s a list of everything included in Studio Magic’s when you register a qualifying PreSonus speaker:

For more details on all of the above, you can visit the Studio Magic page to see the full descriptions of every item in the suite. Note that Ableton Live Lite is not included with Studio Magic when the software suite acquired via a speaker registration.

Interested? Check out these links to find a dealer in your area!

Comments Off on Get Studio One Prime and the Studio Magic Suite when you buy a PreSonus Studio Monitor! The monitors roll out, and the reviews roll in. The PreSonus Eris monitor speakers are being met with the sort of enthusiastic reception that we previously have only associated with The Beatles or a new Star Wars picture.
Recording Magazine’s Mike Metlay Ph.D. is bona fide qualified, and we’re really excited that he’s the guy who got to review these products for Recording.  That Ph D. is in nuclear physics, BTW.  Here’s a couple pull-quotes from Mike’s review:
“PreSonus’ first studio monitors present very neat solutions to the problem of affordable, good-sounding monitoring for small studios.”
“Let’s talk price. The E5 costs a bit more per pair than a set of cheap-ass desktop computer speakers and a thumpy little one-note sub, but for your money you get monitors you can actually use for real engineering. The E8 is even more of a no-brainer: it basically allows recording musicians who want proper full-range studio monitors, but don’t yet have the budget for high-end products, to get into the game without hurting themselves.”
Readers who want to get into the nitty-gritty details of  frequency response, 12 dB/octave highpass filter options, and more, please download the full PDF of the review by clicking this sentence.