Select Image Sounds products up to 80% off for one week! 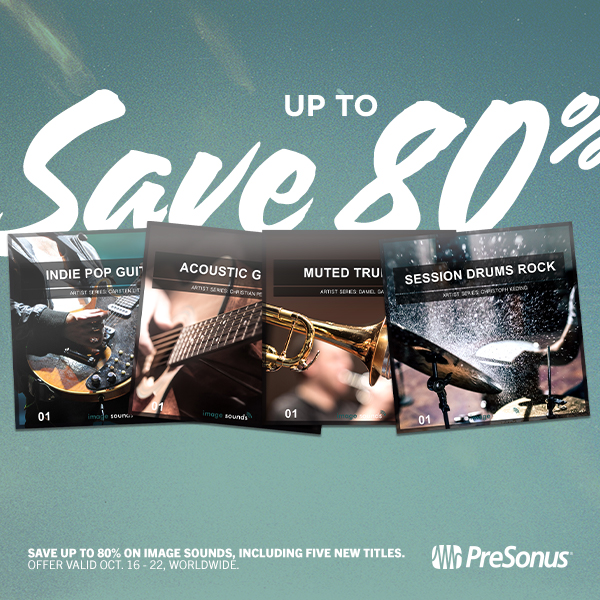 Now through October 22, SAVE up to 80% on select Image Sounds products right out of the PreSonus Shop! That’s over 50 loop bundles up for grabs at the best price all year—products from Image Sounds have never been this low-priced in our shop, grab ’em while you can!

This offer is available worldwide starting today through October 22.

Comments Off on Select Image Sounds products up to 80% off for one week!

SAVE 50% on ALL Spark Collection Products! 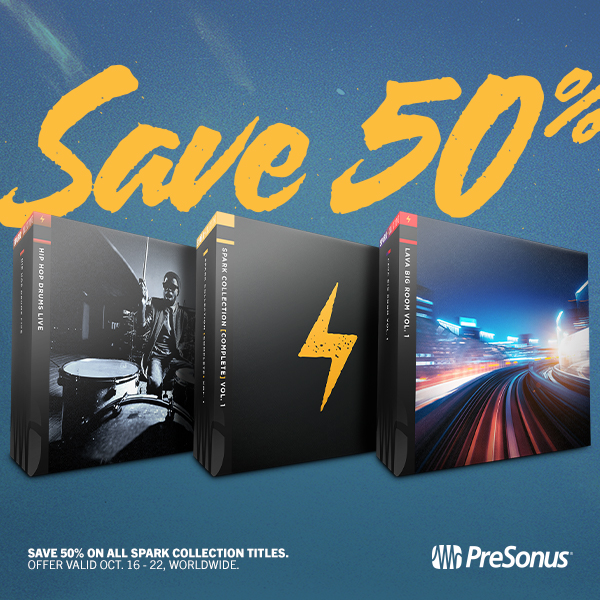 Already at a LOW price, the price for all Spark Collections is now even lower for the next SEVEN days only!

We announced the Spark Collection back in 2019; here’s a little snippet about it:

Hit the ground running with the Spark Collection of loops and add-ons from PreSonus! These low-priced loop packs are a great place to start making music for less. These professional, royalty-free tracks are a great source of inspiration for starting a new song, learning how to mix, or adding a little flavor to your existing compositions. We’ve launched Spark Collections with a whopping 35 packs… with many more to come!

Everything from trap, reggae, pop, and sound FX are available in the Spark Collections–NOW ALL for 50% off!

This offer is valid starting today, October 16, 2020, runs through October 22, and is offered worldwide!

Comments Off on SAVE 50% on ALL Spark Collection Products!

If you’ve spent a couple of spare evenings at home poking around the web for tips on music and audio production, it’s really very likely that you’ve run into some posts, articles, or comments from Craig Anderton. In fact, you may have had to update your search criteria to sort by “most recent,” because it’s fairly common for Google to show you some Craig Anderton posts from the dawn of the internet age, which—while cool—may not be particularly full of insight on Studio One version 4.

Fact is Craig is our industry’s most acclaimed writers, and he’s spoken about Studio One in-person at more events than I can count, and is of course responsible for the Friday Tips section of this very blog. In short, Craig’s contributions to the success and proliferation of Studio One can’t really be counted.

But his Studio One books? Those can be counted. There are five.

We wanted to take a minute to thank Craig for all of his hard work, broadly-reaching creative output, and continued support of PreSonus and Studio One. Let’s take a closer look at what he’s got over at shop.presonus.com. Chances are one or more of these will prove valuable to you and your process. Note that these are eBooks, not hardcover books, and will be downloaded as PDFs. 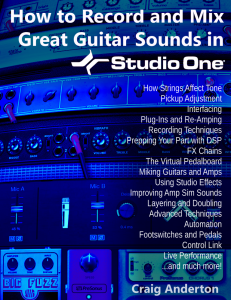 How to Record and Mix Great Guitar Sounds in Studio One

Essential reading for anyone who records guitars in Studio One, this definitive book covers invaluable production and engineering techniques. 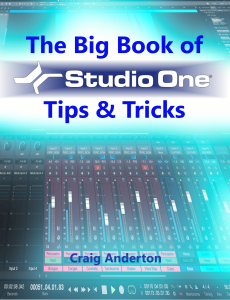 The Big Book of Studio One Tips and Tricks 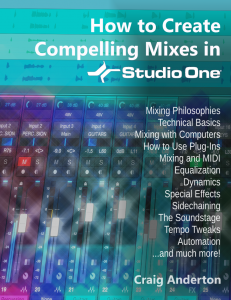 How to Create Compelling Mixes in Studio One

A comprehensive, practical, and above all inspiring guide on how to use Studio One’s sophisticated toolset to craft the perfect mix. 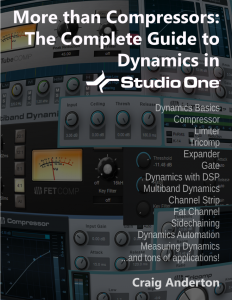 More than Compressors: The Complete Guide to Dynamics in Studio One

The ultimate guide to becoming an expert on Studio One’s dynamics processors and dynamics-oriented features. 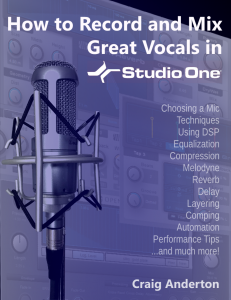 How to Record and Mix Great Vocals in Studio One

The ultimate guide to capturing, producing, and mixing superb vocal performances in Studio One. 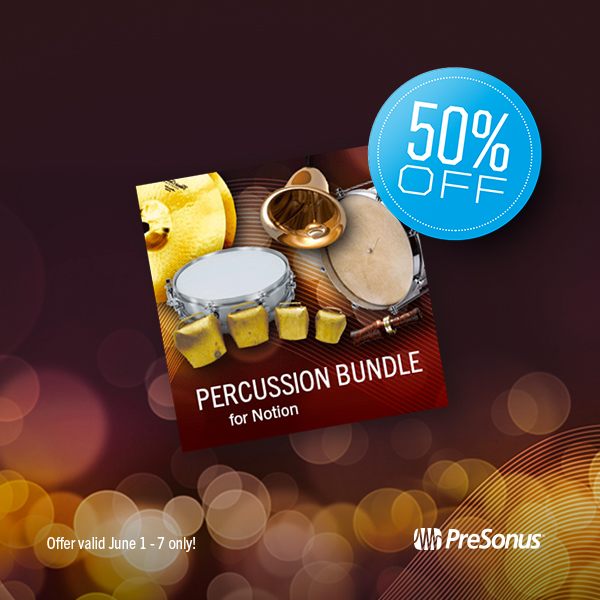 The Percussion Bundle is the percussionist’s toolbox.

The entire Notion Percussion bundle is a palette of drums, rhythm shakers, cymbals, noise makers and sound effects from around the globe.

The entire bundle is available in this single convenient download, or you can pick and choose from the various collections available in the bundle. Get just the sizzle cymbal, bongo, or duck call that works just right for you and your project—for 30% less!

This offer is available now through June 7, 2020, and is offered worldwide. 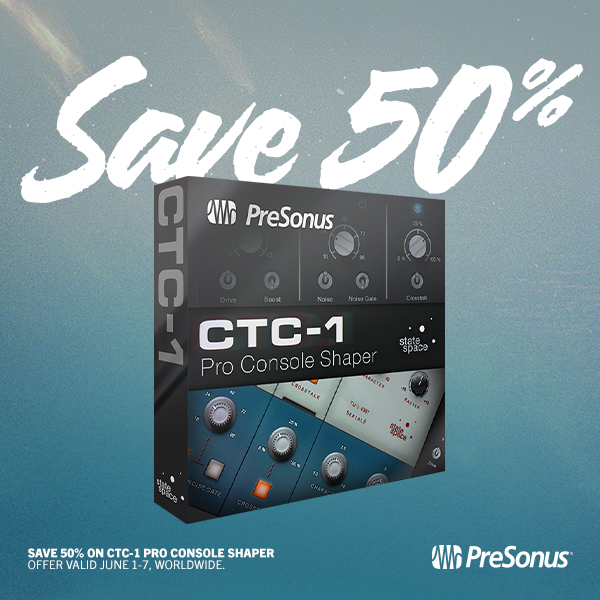 Save 5o% on the CTC-1 Pro Console Shaper right out of the PreSonus Shop!

The CTC-1 Pro Console Shaper is the second in its series of Mix Engine FX plug-ins for Studio One. The add-on, which works with Studio One Professional 3.3.1 and later, provides three great-sounding models of classic British, vintage tube, and custom consoles and adds several major enhancements to the Mix Engine FX environment.

HURRY! This offer is valid now through June 7, 2020, and is available worldwide.

Comments Off on Save 50% on the CTC-1 Pro Console Shaper!

SEVEN Days to Save on All Impulse Record and DrivenSounds! 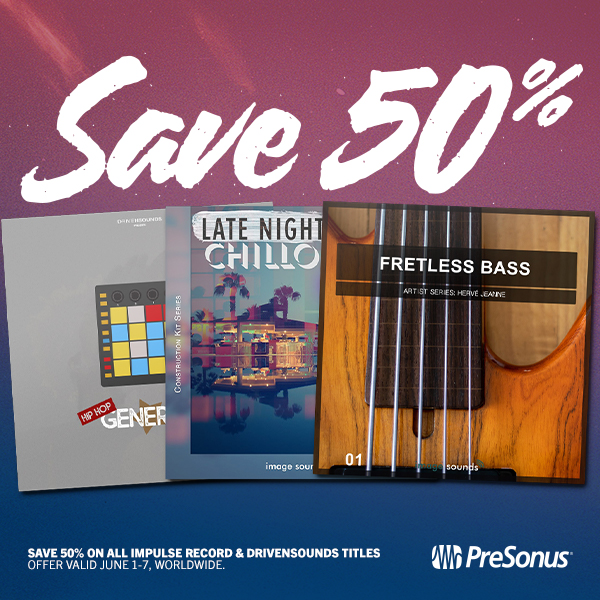 Now through the end of the week SAVE 50% on all Impulse Record and DrivenSounds libraries right out of the PreSonus Shop!

If you are looking for some heavy and blazing kits… DrivenSounds has you covered!

Impulse Record, a Grammy considered household name in the recording industry is offering another great discount this week!

This offer is only available worldwide now through June 7, 2020 and available right in the PreSonus Shop.

Comments Off on SEVEN Days to Save on All Impulse Record and DrivenSounds!

New Arcades and Studio One!

Instagram isn’t just for cute, filtered images of yourself and your dog or gear! It’s a great community uniting musicians and artists brave enough to put their best work out there. One of those Instagram accounts is run by our friend and Studio One user, Adam Sullivan—one of the front men for New Arcades, a UK duo inspired by nostalgic memories of 80s cinema and vintage synth sounds. Think of blue skies, urban nightlife, and hazy sunrises and you have the New Arcades!

Studio One is Adam’s go-to DAW since 2.0! He also has a FaderPort and StudioLive 24R.

I’ve been a musician from a very young age, nowadays I’m a jack of all trades, master of none. I obtained a degree in music technology and sound engineering/composition at Lancaster University (UK). We started creating music and mixing tracks in 2008 and haven’t quit. It has become more and more serious in the last few years. This all in conjunction with being one of the main FOH Engineers at my church in London, Holy Trinity Brompton. Now I mix various artists’ tracks and create my own music for New Arcades. Additionally, my side project is known as “Shred Ministries” which has developed quite a decent following from the church/Christian scene as a comical reproduction of modern worship. Check it out on YouTube for a laugh. Less and less are the labels willing to part with cash in order to promote, the risk is far greater for the artist it seems unless you are manufactured by the giant label themselves. Back in early days with medium independents, there might be a decent(ish) advance in exchange for the master copyright recordings. But it’s tragically at the point now, where for a promise of exposure, and (hopefully) enough money made is usually in exchange for the masters… I think now you have to do so much work, have many friends help push and support you and really drive home the music you create and believe in passionately. I stand by never giving up my masters indefinitely, and I would encourage all artists to be the same even if the promise of a bright future is tempting. Another area: digital music plugins have just stepped up… I now use a kemper when I play live, it’s just fantastic! It sounds incredible and it now would be for me favored over a guitar amp in a room! which I feel is insane! Nothing better than authentically playing the instrument though–somehow that’s always been the same.

It was a co-write with my fellow band members. I’ve always produced and mixed the tracks but my first one was a pop/Indie/Rock track. I was dead proud! I look back on it now though, it was the early days, I’ve progressed, as has the DAW and the plugins! 😉

A few times I have thought about stopping but I absolutely cannot help my need to create and ultimately, I persevere. I think also having a writing partner and bandmate always helps! Especially when you are both in tune, have similar styles and principles in your songwriting.

The first thing that caught my eye was back in 2011: Studio One 2.0. It had this simple “Drag and drop” feature. I just loved how easy it was to slap something on the channel… The layout of the mix window and the integration of Melodyne. That, along with the power and depth of the EQ, Room Reverb, and Compressor that came with the package as standard had me hooked!

Studio One 4.5, FaderPort, various bundled software. StudioLive 24R rack mixer. I also use it in conjunction with the StudioLive 24 mix desk that I TOTALLY love!) It works great for all my function work, and is such a flexible setup.

I was actually referred to it by a friend. They said they’d seen a review in Sound on Sound, which is very well respected. I went home, downloaded the free trial and haven’t looked back!

The interface of the Q-Mix and UC Surface app is great. The sound of the preamps in the Series III equipment. Capture 3.0 is fantastic also. Onboard SD card stem recording on the desk itself. I’ve yet to put the StudioLive 24 in with my DAW, but I’ve seen it can be a great surface, along with the remote control iPad app for vocal booth recording. Love the use of MixTool, for mid-side processing. Have a look at it! Sidechain compression by simply using the compressor and clicking “Side Chain” and sending from the track to the active compressor—incredibly easy.
How easy/difficult was Studio One to learn?

Super easy actually! I had a decent understanding of several other DAWs. But Studio One was quite intuitive. I watched a few tutorials and just trial and error massively reap benefits. Studio One 4 is so powerful and versatile. Go exploring!

YouTube, forums, etc. I have friends who are also well-established producers/mix engineers who I can pick the brains of on the regs. But I’m quite independent and I hate being defeated by things—so I usually resolve things myself!

I listen to other artists in the scene or genre I’m in, I watch movies that inspire creativity and put you in a hungry mindset… A bit like watching the movie “Creed” would make you want to train your socks off and chin someone in the ring. 😉 I do similar for my music. There are so many inspiring artists and creators out there, listening to fantastic scores and tracks just make me want to compete to be the best and make something as exciting and epic.

I just finished my album for my band New Arcades. I’ve been working on it since 2012! It’s being mastered as we speak, so hopefully won’t be long before it drops. Recently also did a track for well know acoustic/folk artist Roo Panes. He is a fantastic performer and the song we worked on together was called “Thinking Of Japan.” Everything has been recorded and mixed on Studio One. Next, will continue to do loads of live events and functions using all the gear, hopefully, make my own second album and work with more and more artists.

Join the Studio One family at the best price all year—NOW!

Comments Off on New Arcades and Studio One!