In celebration of our 25th anniversary, last month we announced our new YouTube series the River City Sessions. The River City Sessions give us a chance to support the kind of musicians that help build our company and share their work with a global audience. This month features Donald Gelpi aka. The Big Burly Man, performing his song “Holy Ghost.”

You may be curious about where the name “The Big Burly Man” came from (so were we) so we took some time to get to know the man behind the beard and more about his songwriting and this haunting song. 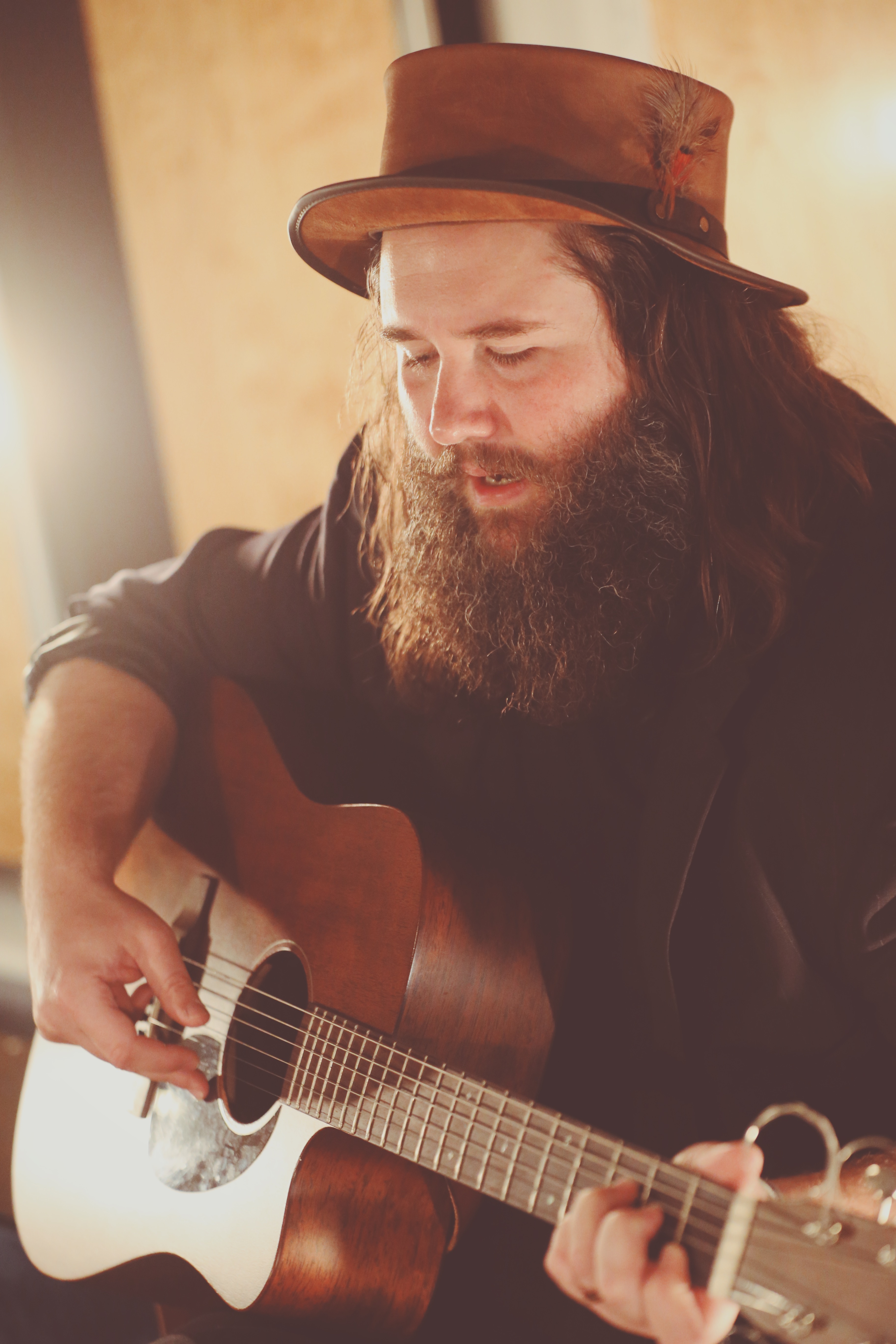 Tell us about yourself. How long have you been making music? Who are some of your inspirations? Who did you grow up listening to?

Besides my rap and alternative rock stage, I really had my first musical shock listening to Led Zeppelin around 16. I was really into them, and still, love them today. I had also gotten into other classic greats like Jimi Hendrix, which got me into, Bob Dylan from loving “All Along the Watchtower.” That kind of started the whole folk-singer songwriter thing for me.

Where did The Big Burly Man come from? It’s a great name!

Thank you! Some years back I had written a song called “The Big Burly Man.” It was about me, and at the time it was kind of a hidden moniker. It had been on my mind to possibly start performing under it for a couple years. Some of my favorite artists go under stage monikers, and it was a lot more common for artists to do it back in the day. A lot of those old blues players did it too. It’s almost like being a character, as a part of this whole creative idea. I don’t know, it just seemed fun and cool.

Tell us about the song you performed for the River City Session. When did you write it? What’s the inspiration?

I wrote it towards the end of October of 2019. It’s got this haunting sound to it, and it was around Halloween, so naturally, I was thinking about ghosts and things like that. I’ve gotten a lot closer to God over this past year, and I thought how great would it be to have this haunting sounding song referring to the most epic ghost or spirit of all. Holy Ghost, I thought. I love it.

What’s the best song you’ve ever written? Why is it the best?

It’s difficult to say. “Holy Ghost” is up there. Another song that I would naturally think of first is “C’est La Vie.” It’s a very upbeat and catchy song soaked in heartfelt lyrics and truth. It’s a local fan favorite too.

Tell us about a successful show or event you were a part of.

It wasn’t without mishaps, but this past October. I had the honor of putting together my very own music festival. It was called “Baton Magique.” It was an Indie Folk Festival at Tin Roof Brewery. It was a lot of work, but we had a pretty great turnout for its first time around, and I received a lot of fantastic feedback from folks which made it all worth it for me. I was also very fortunate to have a few local musicians who were involved pitch their ideas and help with the process. It’s a beautiful thing.

Who is your dream collaboration?

Just one? Ha! It would have to be Bob Dylan, Van Morrison, Damien Rice, or Gregory Alan Isakov. There are many others, but you don’t have all day.

The magic of it all! It truly seems that way. When I write a new song, it’s like getting a new toy or something. I just can’t put it down. It feels like Christmas morning. It’s an absolutely thrilling experience! God is the creator. He loves to create. It’s not too far fetched to imagine why we love to create different things too. Mine just so happens to be simple folk songs.

I wouldn’t say I hate it, but the only part that feels like work is promoting my music, and trying to get folks to come out to a show. There’s also always a lot of “it’s who you know gets the good show” going on behind the scenes. I know that happens everywhere though, but it’s tough sometimes. That’s why I’m super grateful y’all chose me. Y’all didn’t know me, or owe me any favors. Thank you!

If you could change anything about the music industry, what would that be?

I’m not sure I’d change too much. It is what it is. And the way it is is due to many factors and reasons. I’m thankful just to do my small part as big as I can do it.

What advice do you have to anyone getting into the music scene?

Create the kind of music that inspires you! If you feel that lantern being lit and burning from the inside, you’re doing it right.