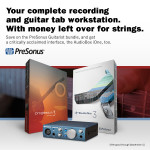 Here’s the deal… when you buy and register an AudioBox iOne you automatically get Studio One 3 Artist, which is a tremendous value. But now through September 30th, 2015 you will also get Progression 3.

That’s a screamin’ deal…you basically get the audio interface for the price of the software…and it’s the perfect recording solution for guitarists and singer songwriters.

The AudioBox iOne allows you to record your vocals and guitar (or anything else) at a sterling 96 kHz. You can use it with Studio One 3 on your laptop or desktop computer, or record directly to your iPad using Capture Duo (which is a free download from iTunes). Capture Duo also allows you to wirelessly zap your recordings over to Studio One 3 for editing and mixing.

Once your recording is in Studio One 3, you can add all kinds of distortion, amp simulations and effects via Ampire and our other Native plug-ins. And thanks to Impact, and a nice collection of backing loops, you’ll even be able to create drum tracks and produce full songs.

Last but not least, for the more tablature-minded set, Progression 3 will allow you to create guitar and bass tablature, lead sheets, and standard sheet music with an intuitive fingerboard interface.

All told, this is a lot of power for not a lot of cash.

Comments Off on New Guitarist Bundle—Progression, Studio One Artist & the AudioBox iOne for an Astonishingly Low Price 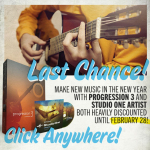 Hurry, LAST CHANCE to Save Big on Progression 3 and Studio One Artist! Hurry, this great offer ends February 28! Click here to get Studio One Artist and/or Progression 3 for just $20.15 (USD) each! If you’re not in the USA, that’s OK—monster discounts are available globally. Get your song on for less money than you even thought was possible!

Long-haul six-string stalwarts at Guitar World paid us a visit at NAMM, and received demos for both the Metal Pack Add-on for Studio One, as well as the Progression tab editor. Fortunately for us (and thereby, you) they brought video cameras.

Thanks much for the kind attention, gents, and particularly to Scott Van Heldt, without whom the Metal Pack could not have been properly represented. To hear more of his heavy, click here.