From Oingo Boingo To The Resident: Bill Jackson Talks Faderports

2020 has been a year like none other that most of us can remember in our lifetimes. But, we managed to see another Halloween weekend come and go… and true to my own annual tradition, I busted out the Oingo Boingo playlist to honor the songwriting/compositional mastery of Mr. Danny Elfman, along with one of my all-time favorite drummers, Mr. Johnny “Vatos” Hernandez and his quirky approach to propelling all those amazing songs they created in the 80’s.

So, I had the honor of spending time this past NAMM 2020 in Anaheim at our PreSonus Booth with Mr. Bill Jackson, who I discovered was Oingo Boingo’s recording engineer on one of the songs to a hit movie I used to watch ad infinitum back in my youth, Weird Science and all subsequent album releases as well as my go-to end of year holiday film (to this day), Tim Burton’s Nightmare Before Christmas. We spoke at length about how he’s been using our Faderport line of control surfaces to craft his mixing with total human organic interactivity.

Here then, is what he had to say and much more! 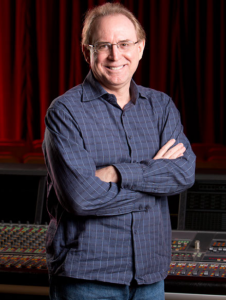 I started working with sound when I was five years old. For Christmas, my parents gave me (what was probably) the first reel-to-reel tape recorder in our town.

During college, I played guitar in bands and also recorded them, as well as other local artists, with a Teac A3340-S. I had no EQ on my Tascam mixer, but I had a Tapco spring reverb.

My career started at Sunset Sound in Hollywood. I started as the runner, but I was always going in early and staying late. Sunset has 3 rooms, and I would go to each room, before the session started and look at every mic, then follow the path through the console and all the outboard gear. These were great engineers, working on projects like Van Halen, Doobie Brothers, Toto, etc. Eventually, I was able to hang out during some of the sessions and the clients got to know me. That led to me getting thrown into a lot of sessions, including some for a solid month of engineering for Prince, Sheila E., and The Time.

I randomly was selected to be the assistant engineer on “Weird Science” by Oingo Boingo. When they came back the next week, to record the Dead Man’s Party album, the engineer could not commit to it, so he told Danny Elfman to use me. I recorded every album after that, including the final Live Farewell album.

Danny had also started scoring music for films, and I recorded music for about 12 films with Danny, including recording all of the singing voices for Nightmare Before Christmas.

Around the same time that I started working with Oingo Boingo, I had been recording demos with this producer, Howard Benson. That eventually led to recording and mixing about six major-label albums with Howard, including Bang Tango’s Psycho Café. Howard continues to make records that achieve gold, platinum, and #1 status.

I have probably worked on about 200 albums, in some capacity.

Now, I mix a lot of prime-time network television and a lot of documentaries and have created a space at my house for mixing all of that, as well as recording and mixing albums and singles for independent artists.

So, my PreSonus journey actually started with a music editor, Micha, that I was working with. I noticed that he (and other music editors), would bring in a little box, that sat beside their computer. It had one fader, cool transport control buttons, lots of function buttons and a big blue knob. I asked him about it, and he showed me what it could do. (Music editors, as part of their job, have to present Quicktime mixes to the producers, using the music score from the composer, the way it should sound in the finished mix. This helps the producers decide if they want to keep the music, or make changes to it).

NAMM was just a few weeks away, and by chance, I walked in to the entrance where PreSonus was set up. I was immediately drawn over to what turned out to be an 8-fader version of the single-channel FaderPort that the editors were using. I played around with it and asked a few questions, and when I got home, I ordered one of the first ones available. 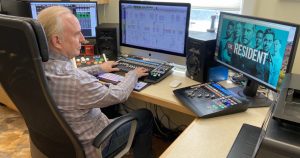 What drew me to the FaderPort 8 was the small footprint and low profile. I like having it right in front of my timeline monitor, and it doesn’t block my view, as some new controllers can, and its depth is shallow enough that my monitor can stay completely behind it, but still be close to me. I also loved the price. I don’t think there is anything out there that compares with the FaderPort 8 and FaderPort 16, for the price.

What I like the most about the FaderPort series has to start with the amazing transport controls. Whomever designed this transport is a genius. I am all about minimal movement and conservation of energy. My setup has four monitors, and I divide my movements fairly evenly between my right and left hands.

The tactile feel of the buttons, and the precise layout, which matches where my fingers naturally fall, is awesome. Especially if I am recording overdubs and constantly using the transport controls… I don’t have to move the position of my hand or even look at the controls. It is very ergonomic and natural.

Other features that make my life easier, are the big blue knob that allows me to quickly spin to the next bank of tracks, or move 1 channel at a time. I am always spinning that knob to get the channels that I want to be on the surface. In addition to a Solo Clear button, there is also a Mute Clear button, which will clear the solos and mutes showing on the surface in Pro Tools.

I like that the Audio and Virtual Instrument buttons can be used to switch between the Mix and Edit windows in Pro Tools.

Very convenient are the Latch, Trim, Touch, Write, Off and Read buttons, to change the automation setting of highlighted tracks.

Something that definitely should be mentioned, is that I can choose between Studio One, MCU, HUI, and MIDI Mode, when I set it up to use with my DAW.

I also love that I can adjust the fader sensitivity. I have always had issues with moving faders knowing that I am touching them. The Faderport gives me 7 levels of sensitivity to choose from. Level 6 works perfectly for my fingers.

I can also easily adjust the contrast and brightness of the display to work with my viewing angle.

It comes in handy for recording music, especially how the large Select buttons can become the Arm buttons, in bright red. My average tracking session is about 12-14 tracks of drums and the other live musicians (usually playing along as guide tracks for the drummer). Boingo always recorded that way, with everyone playing live, even if we were only going to keep the drums. I still record like that. It helps the band realize that the tempo and drum parts are right. 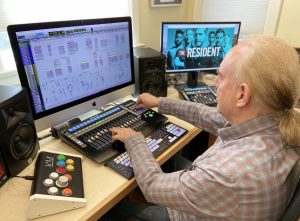 The Faderport 16 especially shines when it comes to mixing for Television. Here’s the workflow/process:

For each episode, my mix tech, Christina, at Sony, sends me the Pro Tools session, which is made from a combination of my template and my FX editor, Mike’s session, and the audio files folder that goes with it. They both have my template, so this is an easy collaboration. Mike has cut in all of the FX and BG tracks, from scratch, but also includes some pre-mixed 5.1 sounds, that I have made from previous episodes, that I sometimes blend into similar scenes in the new episodes. It ends up being a combination of my pre-mix and his new tracks, for these particular scenes. Mike also includes the Foley, which is performed by Robin and Sarah, the Foley walkers that I love at Sony. I asked for them to be on Madam Secretary, and they also created the Foley for other shows I worked on, such as The Goldbergs, and now The Resident.

What is great about the Faderport 16, is that I can easily grab the eight or so background tracks for a scene, and get a quick balance, then I press the Sends button, and (in this case, select Send C) and grab those same faders to add the ambiance reverb to the BGs that I have selected for that scene.

I then press the Pan button, which turns those same faders into left and right panners, that I use to pan the more specific tracks of the BGs, such as typing, paper shuffling, cars, and sirens. If I am just panning a single track, I may grab the blue pan knob to do a traditional knob pan. Any surround panning is accomplished with a touch screen I have, which mimics the surround panner in Pro Tools. I also use the Sends button to send FX to the subchannel, and any of the other 3 reverbs that I use. Even though I am using HUI control, I am able to do all of this. I also have the input meter turned on, as well as the ability to see the fader dB levels in the scribble strip. I also use the VCA button to show and hide my EQ plug-in. The Shift-Track buttons allow me to display the SMPTE (or BPM) onto the strip.

When I started mixing episodic television at my place, I need to be able to work efficiently and fast. I had used other small format controllers, but wanted something different in price and also features.

Having 16 faders available on the surface. I really mean this, when I am mixing backgrounds, it is nice to have the faders spaced relatively close together. I can work faster, grabbing 8-10 faders, and then switching to Sends mode and grabbing the same faders to add ambiance. This works very efficiently for me.

I would love to have a single button for saving. I am saving my session all the time, and it would be great if I could just double-tap on the big blue knob to save my work.

All in all, I love how you guys took a console for everyone and made it work so well with HUI in Pro Tools. 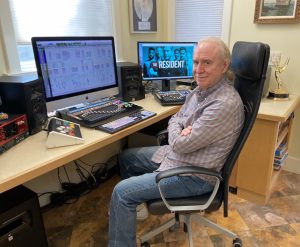 An added bonus of mixing at Jacksonland (my home studio) with the FaderPort 16, is that I already had a personal mix workflow in place when COVID-19 appeared, and have been able to continue working on The Resident, every week while all of us are sequestering ourselves from each other, since I was already mixing in this manner.

More information can be found at Bill Jackson’s website here.