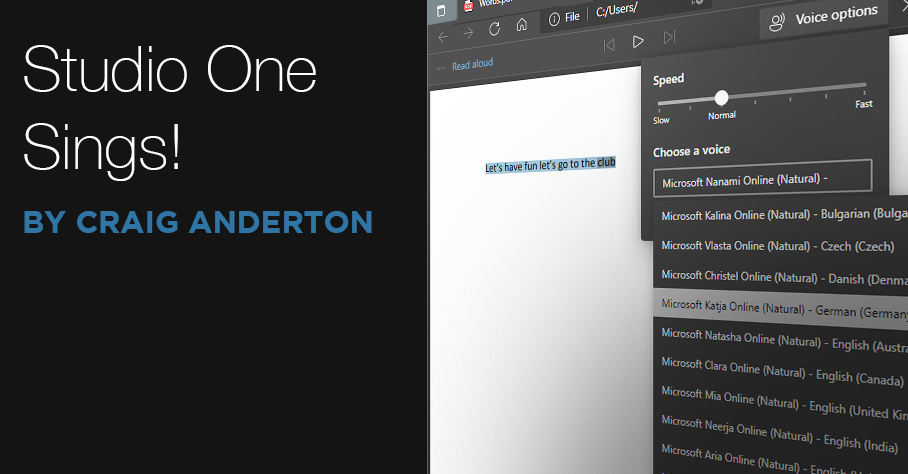 Let’s get one thing straight: yes, I did promise a tip of the week. But, I specifically didn’t promise it would be normal. Besides, I know some EDM fans are just going to love this one. And with plenty of creative Studio One aficionados out there, who knows what you’ll do with this…

I wanted to see if it was possible to use a simple, no-cost text-to-speech synthesizer, create a phrase, load it into Studio One, and tune it with the Chord Track. While the results won’t be mistaken for Realitone’s Blue, this setup can do some cool tricks—check out the audio example, with a vocal that’s not being sung by a human.

This all started because a person who had bought The Huge Book of Studio One Tips and Tricks mentioned that you could load the PDF into Microsoft Edge (which is cross-platform). Then if you invoked Edge’s Read Aloud function, the program would read the text to you. Say what? I had to try it.

There are plenty of text-to-speech converters, including ones built into MacOS and Adobe Acrobat. Extensions are available for various browsers, and there are cloud-based text-to-speech services. But Microsoft Edge’s implementation is a great way to get started—just open a PDF doc in Edge. (Non-PDF docs will have to be converted or exported first; you can always use a free option, like Open Office.) Select what you want it to read, and then click on Read Aloud. The fidelity is excellent, and you can speed up or slow down the reading speed.

There are 10 different English speakers, but if you choose one of the other 28 languages, depending on the language, they’ll read English with an accent (fig. 1). Of course, these languages are meant to read texts in their native language, but who cares? I used Katja, the German speaker, for the audio example. She speaks English quite well. 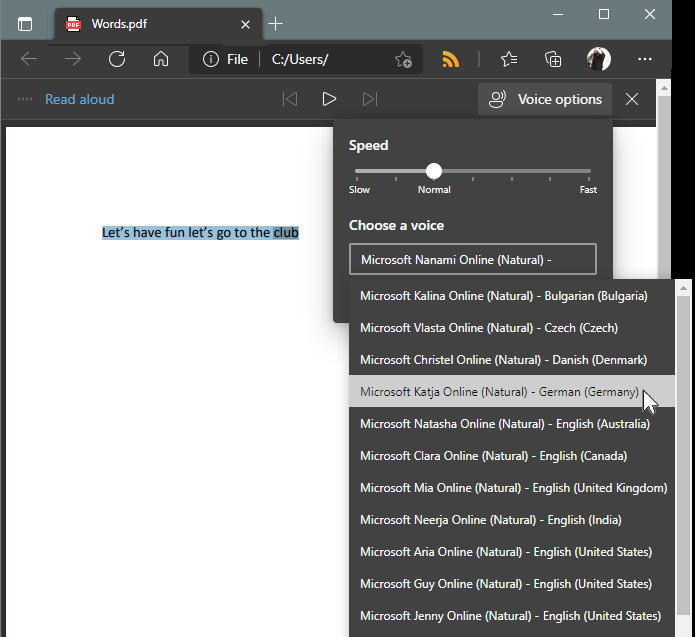 Figure 1: The text-to-speech feature in Microsoft Edge is surprisingly flexible.

Next, you need to get the speech output into Studio One. I have a PreSonus 1824c interface running on a Windows computer, and in that scenario, all that’s necessary is enabling the virtual input while Edge reads the words. Just remember that when you record the audio, to avoid feedback, don’t enable Input Monitor for the track you’re recording—just listen to the virtual input.

In addition to third-party apps that capture audio, the Mac has a fun way to generate speech. Open TextEdit, and write (or load) the text you want. From the TextEdit menu, choose Services > Services Preferences. Next, click Services in the keyboard shortcuts pane. In the right pane, scroll down to Text, and check its box. To create a recording, which you can bring into Studio One, select the text, go to the TextEdit menu again, and under Services, choose Add to iTunes as a Spoken Track. When you initiate the text-to-speech process, the audio file will be saved in the album you specify.

If all else fails, patch the audio output from a device that produces speech, to an audio input for Studio One.

Once the voice was in Studio One, I separated the words to place them rhythmically in relation to the Musicloop. Copying the vocal two more times allowed for panning, timing shifts (one track -20 ms, one track +20 ms, one with no shift), and reverb. To give a sense of pitch, the vocal tracks followed the Chord Track in Universal mode (fig. 2). If you want to get really granular, Melodyne does an outstanding job of varying inflections.

That’s really all there is to it. I just know someone is going to figure out how to use this to create some cool novelty song, it will be a big hit, get zillions of streams, and shower a Studio One user with riches and fame. That’s why it’s so important to read the Friday Tip every week ?

Posted in Friday Tip of the Week, Studio One | 11 Comments