Why the Performance Monitor Is Cool 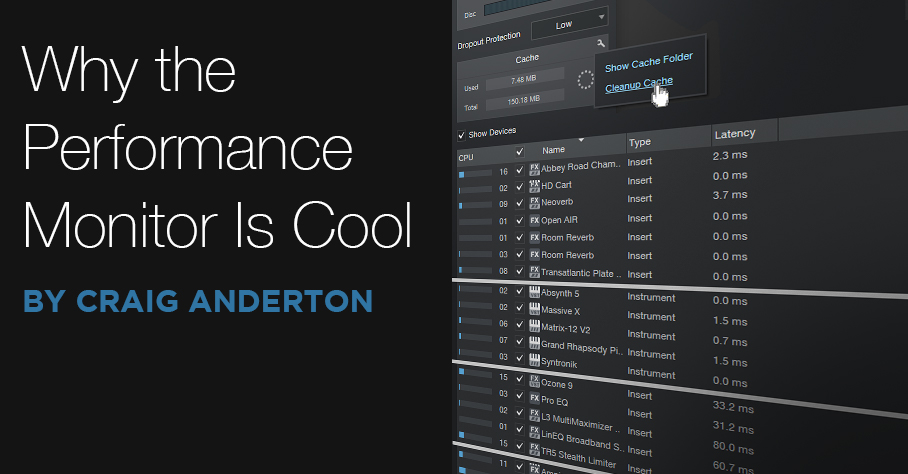 Ever wonder why inserting a particular plug-in makes the latency go through the roof? Which tracks you should transform because they require a lot of CPU power, and which ones aren’t a problem? The Performance Monitor, accessed via View > Performance Monitor, reveals all

But this isn’t just about interesting information. The Performance Monitor will help you decide which block settings to use, whether native low-latency monitoring will work for you, what level of dropout protection is appropriate, and more. Then, you can make intelligent tradeoffs to process audio in the most efficient way, while optimizing system stability.

Start at the the Top

Referring to fig. 1, the readout at the top indicates CPU and disk activity. Check this periodically to make sure you aren’t running your CPU up against its limits. This can lead to audio crackles, dropouts, and other potential glitches. You can also set the level of dropout protection here. 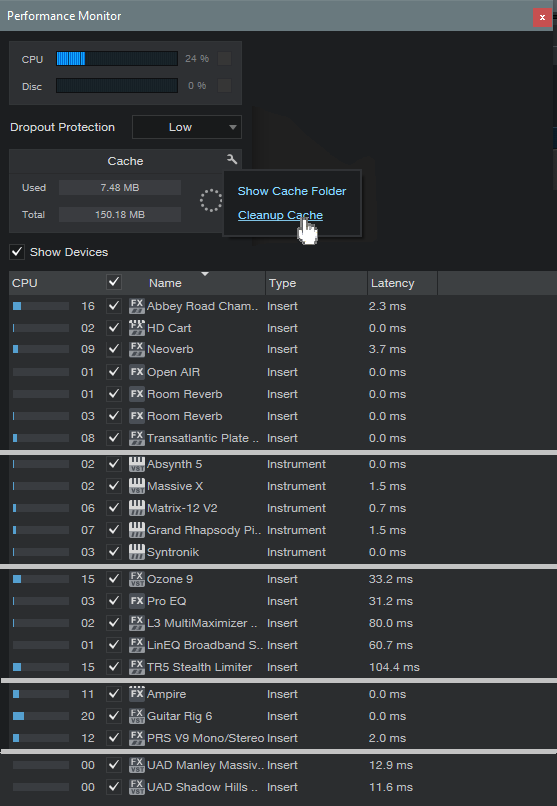 Figure 1: The Performance Monitor window (the UI has been modified somewhat to make analyzing the data easier).

The Cache readout lets you know if you’re wasting storage space. The Cache accumulates files as you work on a song, but many of these files are only temporary. If you invoke Cleanup Cache, Studio One will reclaim storage space by deleting all unused temp files in the cache. If you have lots of songs and haven’t cleaned out their caches, you might be surprised at how much space this frees up. I usually wait until I’m done with a song before cleaning it up.

(Note there’s also a column that shows the plug-in “path,” which is the track where the plug-in resides. For effects, it also shows the effect’s position in the insert section. However, fig. 1 doesn’t show this column, because it takes up space, and doesn’t really apply to what we’re covering.)

The transport includes a performance summary (fig. 2). Toward the lower left, you’ll see meters for CPU consumption (top meter) and disk activity. Click on Performance to call up the Performance Monitor window. The circle of dots indicates writing activity to the cache. Also note the figure under the sample rate—this is the total time Studio One has added for plug-in compensation.

I’ve altered the UI graphic a bit, by grouping plug-ins, and adding a line in between to separate the groups. This makes it easier to analyze the data.

HD Cart is more efficient than I would have expected, and Studio One’s reverbs give a good account of themselves. Open Air and Room Reverb in Eco mode are extremely efficient, registering only 01 on the CPU meter. However, bumping up Room Reverb to HQ mode registers 03.

Bear in mind that lots of CPU consumption doesn’t mean a poor design—it can mean a complex design. Similarly, minimal CPU consumption doesn’t mean the effect won’t be as nuanced; it can simply mean the effect has been tightly optimized for a specific set of tasks. Also note that CPU-hungry reverbs are good candidates for being placed in an FX Channel or Bus. If used in individual tracks, Transform is your friend.

The next group down compares virtual instruments. You’ll see a fair amount of variation. I didn’t include the native Studio One instruments, because none of them requires delay compensation. Mai Tai and Presence typical register 01 or 02 in terms of CPU consumption, while the others don’t move the CPU meter noticeably. Bottom line: if you want to have a lot of instruments in a project, use as many native Studio One versions as possible, because they’re very efficient.

The next group down is plug-ins that use phase-linear technology. All of these require large amounts of delay compensation, because the delay is what allows for the plug-in to be in-phase internally. The Pro EQ2’s reading (which alternates between 3 and 4) is for only the phase-linear stage enabled; the nonlinear EQ stages draw very little CPU power. This is what you would expect from an EQ that has to be efficient enough to be inserted in lots of tracks, as is typical in a multitrack project.

The next-to-the-last group is amp sims. The figures vary a lot depending on which amps, cabinets, and effects are in use. For example, the Guitar Rig 6 preset includes two of their new amps, in HQ mode, that use a more CPU-intensive modeling process. The PRS V9 doesn’t have a lot of bells and whistles, but concentrates on detailed amp sounds—hence the high CPU consumption. Ampire is somewhat more efficient than most high-quality amp sims, but there’s no avoiding the reality that good amp sims consume a lot of CPU power—which is another reason to become familiar with the Transform function.

Finally, the last group shows why even with today’s powerful computers, there’s a reason why people add Universal Audio’s DSP hardware to their systems. Both the Manley Massive Passive and Shadow Hills compressor draw a lot of power, and require significant delay compensation. But, they don’t draw any power from Studio One, because they get their power from UA’s DSP cards, not your computer’s processor.

It’s interesting to compare plug-ins. You’ll sometimes find that free plug-ins draw a fair amount of CPU because they’re not optimized as tightly as commercial products. You’ll also see why some plug-ins will bring your computer to its knees, while others won’t.

All this reminds me of a post I saw on a forum (not Studio One’s) where a person had just bought a powerful new computer because the old one crashed so much. However, the new one was still a “crashfest”—so he decided the DAW was the problem, and it must have been coded by incompetents. A little probing by other forum members revealed that he really liked iZotope’s Ozone, so he put it on almost every track instead of using a more standard compressor or limiter. Oh, and he also used a lot of amp sims. Ooops…I’m surprised his CPU didn’t melt. If he’d had Studio One, though, and looked at the Performance Monitor, he would have found out how to best optimize his system…and now you can, too.