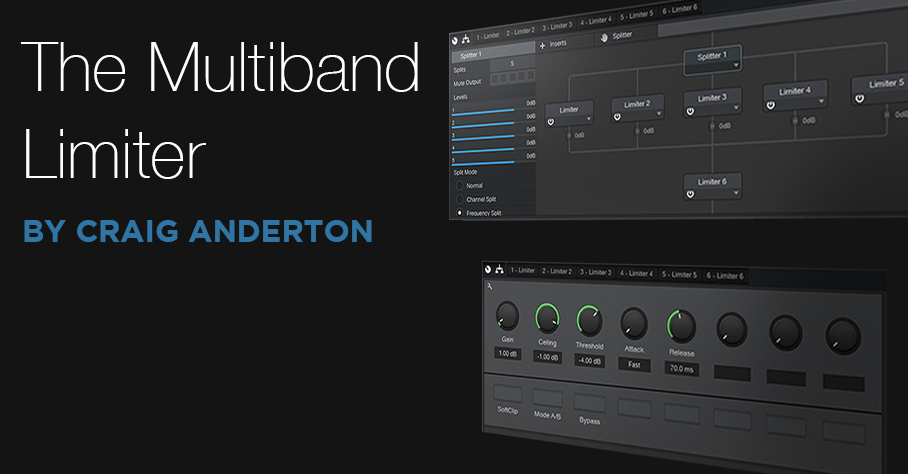 Although Studio One offers multiple options for dynamics control, there’s no “maximizing” processor, as often implemented by a multiband limiter (e.g., Waves’ L3 Multimaximizer). The Tricomp and Multiband Dynamics come close, but they’re not quite the same as multiband limiting—so, let’s use Studio One Professional’s toolset to make one.

The concept (fig. 1) is pretty simple: use the Splitter in Frequency Split mode, and follow each split with a Limiter2. The final limiter at the end (Limiter 6) is optional. If you’re really squashing the signal, or choosing a slower response, the output limiter is there to catch any transients that make it through the limiters in the splits.

Figure 1: Each of the five parallel limiters processes a specific frequency band.

The Control Panel with the Macro controls (fig. 2) is straightforward.

Figure 2: The Macro controls adjust the controls on the five Limiter2 processors that follow the splits.

Each Macro control corresponds to the same control in the Limiter2, and varies that control over its full range, in all the Limiter2 modules that follow the splits. For example, if you vary the Threshold Macro control, it controls the Threshold for all limiters simultaneously (except for Limiter 6 at the output, which has “set-and-forget” settings), over the control’s full range. However, you can get even more out of this FX Chain by opening up the Limiter2 GUIs, and optimizing each one’s settings. For example, using less limiting in the lower midrange can tighten up the sound.

You can download the multipreset from my public PreSonus Sphere area, so you needn’t concern yourself with the details of how it’s put together (although you might have fun reverse-engineering it). And is it worth the download? Well, check out the audio example. The first and second parts are normalized to the same level, but the second one is processed by the multiband limiter. Note that it has a louder perceived level, and is also more articulated. This is because each band has its own dedicated limiter. I rest my case!

The Splitter’s filters are not phase-linear, which colors the sound. There’s an easy way to hear the effects of this coloration: Insert a mixed, stereo file in a track, then copy it to a second track. When you play the two together, they should sound the same as either track by itself—just louder.

Next, insert a Splitter in one track, select Frequency Split, and choose 5 splits. Play the two tracks together, and you’ll hear the result of the phase differences interacting. Choosing a different number of splits changes the tonality, because the phase shifts are different.

This is why for mastering, engineers often prefer a phase-linear, multiband limiter—the sound is transparent, and doesn’t have phase issues. The downside of phase-linear EQ is heavier CPU consumption, and increased latency. But it’s equally important to remember that phase issues are an inherent part of vintage, analog EQ, which have a “character” that phase-linear EQs don’t have.

So as usual, the bottom line isn’t choosing one over the other—it’s choosing the right tool for the right job. If you’ve worked only with phase-linear multiband limiters, give this variation a try. With some material, you may find it doesn’t just give more perceived level, but also, gives a more appropriate sonic character.