Sound Design for the Rest of Us 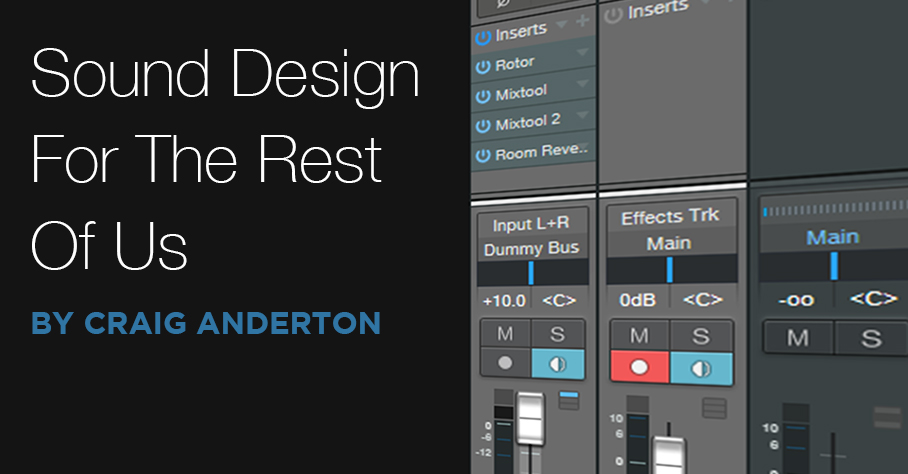 Last May, I did a de-stresser FX Chain, and several people commented that they wanted more sound design-oriented tips. Well, I aim to please! So let’s get artfully weird with Studio One

Perhaps you think sound design is just about movies—but it’s not. Those of you who’ve seen my mixing seminars may remember the “giant thud” sound on the downbeat of significant song sections. Or maybe you’ve noticed how DJs use samples to embellish transitions, and change a crowd’s mood. Bottom line: sound is effective, and unexpected sounds can enhance almost any production

It all starts with an initial sound source, which you can then modify with filtering, delay, reverb, level changes, transposition, Chord Track changes, etc. Of course, you can use Mai Tai to create sounds, but let’s look at how to generate truly unique sounds—by tricking effects into doing things they’re not supposed to do

The “problem” with using the stock Studio One effects for sound design is…well, they’re too well-designed. The interesting artifacts they generate are so low in level that most of the time, we don’t even know they exist. The solution is to insert them in a channel, amplify the sound source with one or two Mixtools set to maximum gain, and then enable the Channel’s Monitor button so you can hear the weirdo artifacts they generate. Automating the effects’ parameters takes this even further.

However, now we need to record the sounds. We can’t do this in the normal way, because there’s no actual track input. So, referring to fig. 1, insert another track (we’ll call it the Record Trk), and assign its input to the Effects track’s output. Both tracks need to be the same format – either both stereo, or both mono. (Note that you can also use the Record track’s Gain Input Control to increase the effect’s level.) Start recording, and now your deliciously strange effects will be recorded in the new track.

The FX channel is optional, but it’s helpful because the Effects track fader needs to turned way up. With it assigned to the Main bus, we’ll hear it along with the track we’re recording. That’s not a problem when recording, but on playback, you’ll hear what you recorded and the Effects track. So, assign the Effects output to a dummy FX bus, turn its fader down, and now you’ll hear only the Recorded track on playback. The Record Trk will still work normally when recording the sound effects.

After recording the sounds, normalize the audio if needed. Finally, add envelopes, transpose the Event (this can be lots of tun), and transform the effect’s sound into something it was never intended to do. Percussion sounds are a no-brainer, as are long transitions from one part of a song to the next. And of course, the Event can follow the Chord Track (use Universal mode).

The Rotor is a fun place to start. Insert it in the Effect track, and run through the various presets. Some DJs would just love to have a collection of these kinds of samples to load into Maschine. Here’s an audio example.

The next example is based the Flanger.

This is just the start…check out what happens when you automate the Stages parameter in the Phaser.

Or turn the Mixverb Size, Width, and Mix to 100%, then vary damping. The Flanger is pretty good at generating strange sounds, but like some of these, you’ll have the best results if you set the track mode to mono. OpenAIR is fun, too— when you want a pretty cool rocket engine, load the Air Pressure preset (under Post), set Mix to 100% wet, add some lowpass filtering…and blast off!