Our newest PreSonus Sphere Artist, Hassan El Shafei, is a musician, producer and founder of THE BASEMENT RECORDS in Egypt. 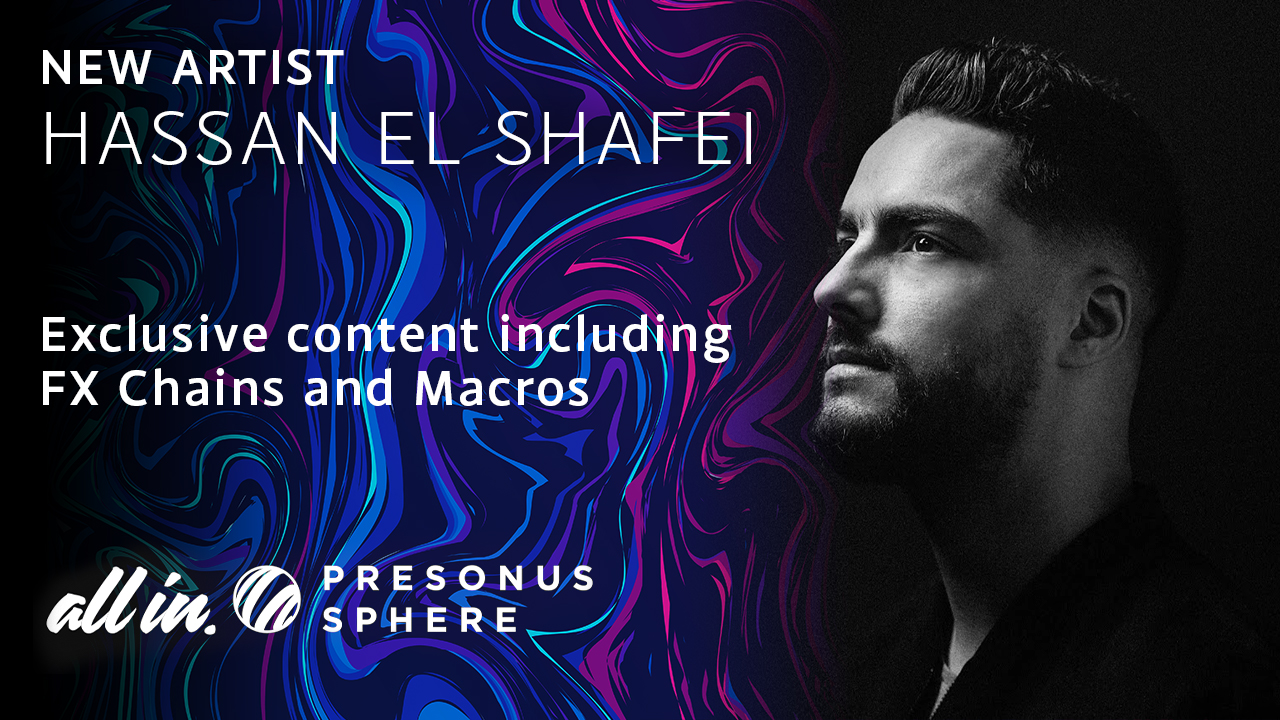 Hassan has produced records for some major artists in the Middle East, and was also one of the judges on the Arab Idol show (the equivalent to American Idol in the Middle East) for four seasons, which aired on MBC. Hassan started releasing his own records featuring other artists in the region, starting with this track, back in the days when he was predominantly still working in Logic and Ableton Live:

Here’s a more in-depth account of his history and evolution with DAWs and how he’s settled upon Studio One and PreSonus Sphere, in his own words:

I started producing a long time ago, using Logic when it was owned by E-magic (the good old days!) I loved Logic, but I felt limited until I got introduced to Ableton Live. I spent a bit of time on my own experimenting with it, but it was too daunting to use for ongoing projects until I took a quick crash course in London on Ableton Live, and then I switched when I felt comfortable using it. I didn’t switch 100 percent, though, because there were many things that were better done in Logic… but Ableton was a game changer, producing music in a completely different mindset… minimalism yet experimental!

The idea of racks, drum kits, and so on was endless, and it felt like a modular system that I could change according to my needs… BUT Ableton was also limiting in many ways: it was very unstable, and lacked many features—as if they were stubborn to actually fix or introduce features. So I started looking somewhere else after years of using Ableton and experimenting with the folks at Bitwig. (I even have a 1.0 badge, I think I had the beta before they released the first version!)

Bitwig were actually adding all the things to Ableton Live that the community wanted but, again they took their own route… which isn’t what I needed until finally I got introduced to Studio One.

I first tried Studio One 3 and was intrigued, but I couldn’t rely on it 100 percent until version 4 was out, which introduced Impact XT and Sample One XT. That changed everything for me, having its ease-of-use in my production environment—yet I also get the all-in-one kind of vibe, which I have never found in any DAW available and trust me… I have looked in every corner!!!

Studio One was the first DAW that lets me produce my whole record from writing ideas to final mixes in one place. That never happened before: it was always either Logic and Pro Tools or Ableton and Logic etc. Now it’s ONLY Studio One, and after all these years that’s really something special to note, in my opinion!

The workflow in Studio One is unbeatable: the Macros are pure magic, the ability to have Key Commands to assign uncommon commands makes Studio One very powerful. Production is a breeze, yet I have all these powerful tools: I can integrate Melodyne and ReVoice Pro via ARA, and I can use Layers while recording and Patterns for beatmaking.

Studio One is the most stable DAW I have ever used, it handles anything I throw at it. I have a big appetite when its comes to production, from producing pop records to scoring music to picture/video… and Studio One 5 is keeping up at my speed! Last but not least, the folks at PreSonus are amazing at consistently striving to achieve the best DAW out there; they are very active online, enthusiastic and most importantly… they listen to the community.

And that to me is priceless.

And one other thing—my newest projects have started to incorporatethe new Show Page in Studio One Version 5 for performing live perfectly in sync with my session tracks! Exciting!

Posted in Artist, PreSonus Sphere, Studio One | Comments Off on Hassan El Shafei: Journey Into Studio One