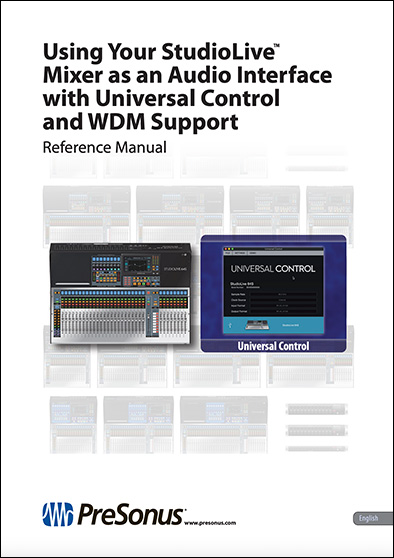 Get the Interface mode Addendum!

Interface Mode is designed to allow the inputs and outputs of your StudioLive mixer to be used like a traditional USB interface, instead of as a mixer with a USB interface that draws from the mixer’s channels and buses. In this configuration, the StudioLive’s USB Returns bypass the mix engine, and instead run directly to the physical, analog outputs on the mixer.

It’s for this reason that Interface Mode makes for a streamlined, DAW-based approach to common tasks like:

While this streamlined configuration does not work with a mixer that is in Stage Box or Monitor Mixer Mode, you will still be able to utilize your PreSonus AVB Ecosystem products with Interface Mode. You can still create personal monitor mixes via EarMix16M and connect different rooms with NSB Stage Boxes.

Note that Interface Mode will only affect the USB routing and the analog output sources. It won’t make any changes to the operation of your AVB routing.

Your FlexMixes will still be there if and when you choose to turn off Interface Mode, or turn an individual mix back on which I’ll go through a little later.

To turn on Interface Mode from UC Surface

That’s it! You’re now in interface mode. To turn Interface Mode off and go back to the default mixer setup just repeat these same steps.

Posted in Mixing Systems | Comments Off on StudioLive Interface Mode has Arrived!