Fun and Games with Alternate Mixes

How to Create and Store Alternate Mixes

When sending a file off for mastering, sometimes the engineer will want two additional versions, one with the vocal up 1 dB and another with it down 1 dB. This is because during the course of mastering, the relationship of the vocal to the track might change. A more prosaic example is creating a mix without vocals for karaoke, and of course, remixes are common in EDM. You might also do an “unplugged” version with only the acoustic tracks.

After creating the alternate mix:

Figure 1: The Export Mixdown dialog box. Note that Import to track (outlined in white) is checked to bring the exported file into the song.

If your mix changes are relatively extensive, save it as a Version so you can recall it later. Choose File > Save New Version, and name it (Fig. 2). Use a name that corresponds to the name of the alternate mix file, and then you can choose File > Restore Version to recall the version corresponding to that particular mix. 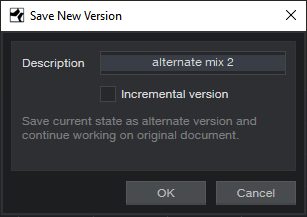 Figure 2: It’s easy to save a version of a song that corresponds to a particular alternate mix.

Last week’s tip covered how to save CPU power with amp sims by bouncing and/or transforming the track with the sim. One user commented “I can see how doing [this] reduces CPU load, but only after I’ve finished choosing and using an amp sim patch. My frustration is the latency or CPU hit when actually playing my guitar through an amp sim, deciding on what I’m going to play, rehearsing it, auditioning amp sim patches and so on.” Alternate mixes to the rescue: make a premix of all tracks except the one with the amp sim, and then disable the tracks themselves. With the tracks now placing no load on the CPU because you’re listening only to the premix, you can throttle the latency way down when playing around with your sim and adding a new part. After recording the part, you can use the tips presented last week to reduce the CPU drawn by the amp sim.

The renewed interest in vinyl has had a corollary effect: an interest in albums and collections of songs, not just singles. As a result, Studio One’s synergy between the Song and Project page—where you can edit songs after hearing them in context with the master file, and update the master file with that song’s changes—is brilliant. But even if you don’t produce albums, Studio One’s mastering options make it easy to obtain consistency among songs. That way, if someone switches from one song of yours to another on YouTube or Spotify, there won’t be a jarring difference.

But you might do various mixes of songs, so you can choose the best one when assembling an album. If you update the version in the mastering file after changing a mix, to compare it to a previous mix you need to open the file with the other mix (which may take a fair amount of time if you have lots of effects and virtual instruments), update the mastering version, and repeat with any other mixes.

A simpler option is to create alternate mixes in your song as described above (remember to save each alternate mix as a separate version), and mute all tracks in the song except for the track with the mix you want to audition. Update the mastering file with that track. To audition a different mix, mute all tracks except for the different mix, update the mastering file, and hear that mix in context. Once you decide which mix you like best, open the Version containing that mix, and then you can make further tweaks to it.