Let’s take a minute and acknowledge some of our favorite TV dads:

Now let’s introduce you to one of the coolest dads out there, Neil de Jong. He is the audio engineer and dad to two of the three-member tribal thrash-metal band Alien Weaponry. Like a good dad, he taught them the value of hard work. The band worked multiple jobs after school and on weekends, played tons of shows and funded all their own gear, full of instruments and recording equipment! Neil also served as the group’s manager until its recent signing to German music agency Das Maschine. He always went out of his way to teach his sons about Māori history and culture which is a massive influence on their music. 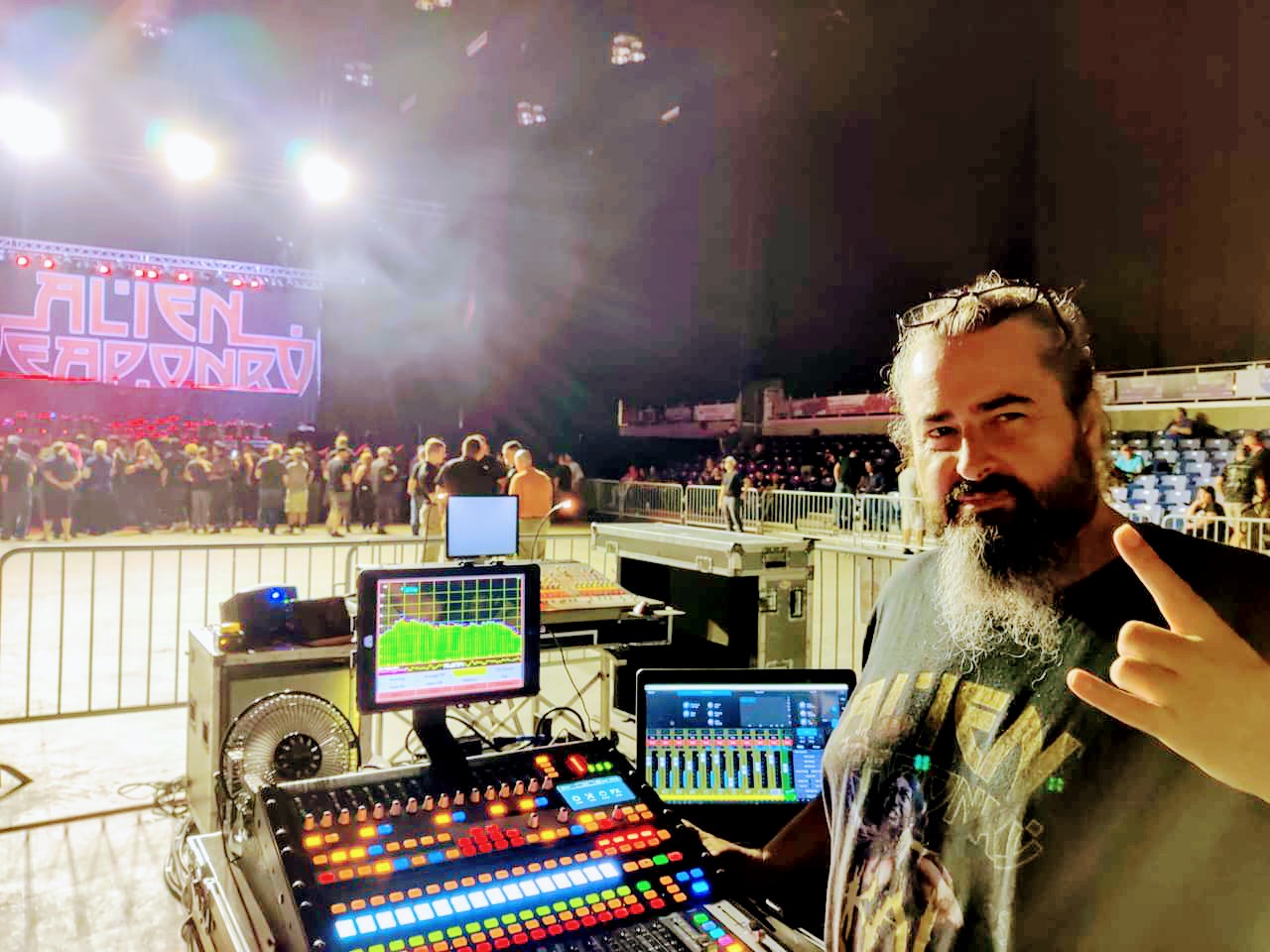 Alien Weaponry is a heavy metal band from Waipu, New Zealand, formed in 2010 by brothers Henry and Lewis de Jong. The band consists of Lewis de Jong (guitar and vocals), Henry de Jong (drums), and Ethan Trembath (bass guitar). Revolver Magazine called them “one of the best young metal bands in the world right now!”Alien Weaponry not only draws on the traditional Māori haka war-dance for their music, but often sing in the Māori language of Te Reo—and by doing so, are keeping the language alive. Pretty metal, right!?

They are currently killing it on tour, and we had the opportunity to hear all about it—and their rig, which includes a StudioLive RM32AI and a StudioLive CS18 AI. Neil took the time to answer a Q&A, below. 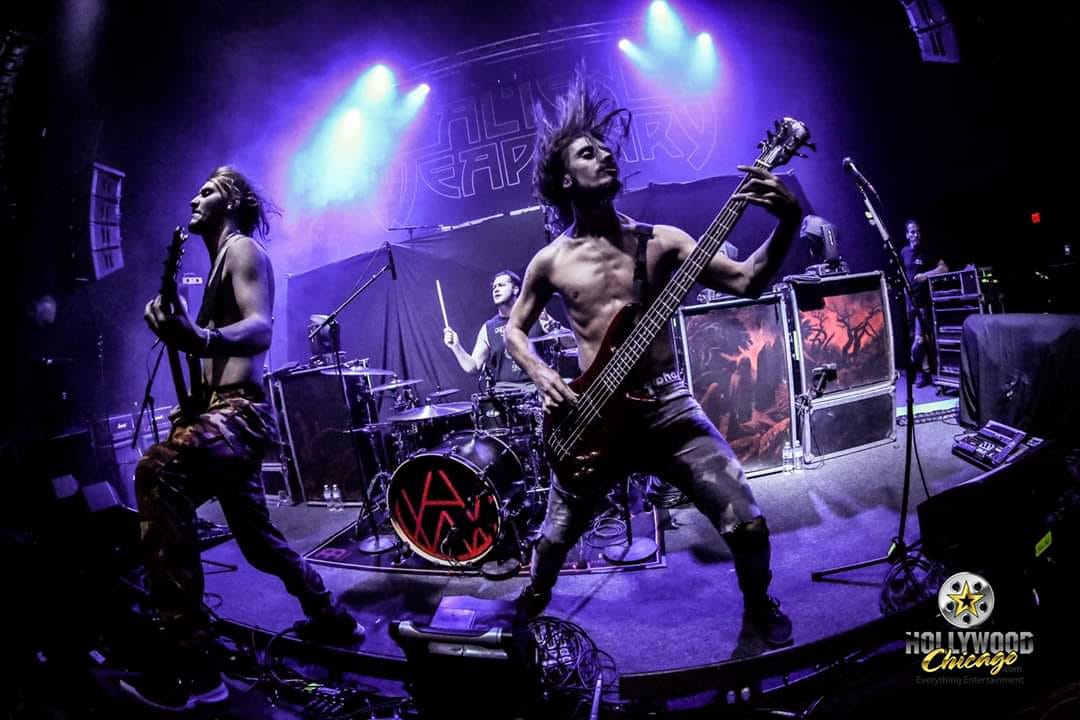 Hey Neil,  give me some basic background info on your career and current projects.

I am 53 years old and have spent much of my life doing sound in one way or another. I spent my early years (like many) playing guitar in bands. When I was in my early 20s I landed a job working in a recording studio and trained there as a mastering engineer. I worked for many years on music and film projects as a post-production sound engineer and when Alien Weaponry started to make a name for themselves internationally I took on the role of live sound operator. I won Record Producer of the Year in last year’s New Zealand Music Awards for my work on Alien Weaponry’s album, Tū, which also won Best Rock Album and made dozens of Top Albums of 2018 lists worldwide.

What PreSonus product(s) have you used in the past and which do you currently use?

I work for Alien Weaponry, who are a young thrash metal band from New Zealand that I have had a long association with—I’m their dad! I started off with an StudioLive RM16AI and an iPad. This was initially to help the band out with a rehearsal space set up, but we found it made a great compact FOH rig too. I then acquired a 23-inch HP touchscreen to use which greatly enhanced the system. About two years ago, I acquired a CS18AI and an additional RM16 which I used for touring in Australasia with Alien Weaponry. I now own three RM32AI rigs, each with a CS18AI and AVB. I use these as my main touring rigs in the three main locations we tour in the world (North America, Europe, and Australasia) I still have the RM16s and recently bought a 24R for the rehearsal studio as the band wanted to record stuff straight to SD card. I have done some fly dates just with the 24R and a touch screen laptop.

For what applications are you using the product(s)?

I have been mixing on my RM32AI/CS18AI rigs at some of the world’s largest heavy metal festivals in Europe, America, and Australasia. (Download UK, HellFest France, Wacken Germany, Metaldays Slovenia, Chicago Open Air amongst others) The band also toured with Anthrax and Slayer last season in Europe and we played everything from 1,200 cap clubs to 20,000 cap arenas. I am almost always running the smallest mixing console at FOH, and it does raise eyebrows. Most guys are on the larger Midas, Digico or Avid consoles. After we play, many want to know what I am mixing on and are surprised by the sound. 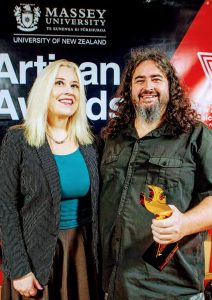 What led you to choose these particular PreSonus product(s)? Was it the company’s reputation, audio quality, specific features, price, other factors?

At the time I was looking for a mixed setup I had investigated the lower-end offerings by Midas and the Behringer X32. I decided to go with the PreSonus RM partly based on the architecture and a recommendation from the guys in New Zealand who run The Rock Shop (from whom I purchased my first RM16AI) Price was definitely a consideration and as it was for a rehearsal space a small footprint was a huge factor too.

Having used the gear, what do you like most about the specific PreSonus product(s) you use so far?

I really like the architecture of the AI-Series stuff. I like that the CS18AI is only a control wing as well as the flexibility I have with iPads and touchscreen laptops. Our monitor mix guy mixes directly to the system with his iPad from the side of the stage during shows. He and the band are on in-ear monitors. I also really like the sound of the PreSonus preamps too and think they sound better than many more expensive options I have encountered at big shows. Certainly better than the Avid/Digidesign console in my opinion.

In each of the PreSonus product(s) you use, what features have proven particularly useful for your specific workflow and why?

I think the “stage box” layout of the RM32AI is perfect for big festival shows with all XLR inputs and outputs on the front of the box. We have our ears wired in on the DB24 connectors on the back, and they conveniently live in the same SKB rack. We have been up and running in as little as 10 minutes with mics all line-checked and ready to go. I also like were the Tap Tempo and FX Mute button are on the CS18IA—right under my thumb.

Any user tips or tricks or interesting stories based on your experience with PreSonus gear?

I like that I can run music for testing the rig from FOH and that our stage mix guy runs the house music from the RMs position on stage. He is able to do a “silent” soundcheck/line check using his in-ears and iPad. This is how we do all festival setups and did many of the shows with Anthrax and Slayer when there was just no time for a full soundcheck. The system has never let us down.

Any final comments about PreSonus, our products in general, and the PreSonus product(s) you use in particular?

I also like that my PreSonus rig is so portable and flexible. The first time we toured Europe, we did it in a splitter van, so space was a big issue and the smaller footprint of the FOH gear was very welcome. I also like the dark grey/ black color scheme of the StudioLive RM AI/CS18AI units.  I’m glad to see the newer Series III units are using less blue… but then I work for a metal band, so black is king. It’s one of the reasons we use Audix mics, hahaha!