This signal processing setup is optimized for single-string guitar solos where you want a lot of sustain—but it has a secret ingredient that puts it ahead of typical guitar stompbox sustainers. 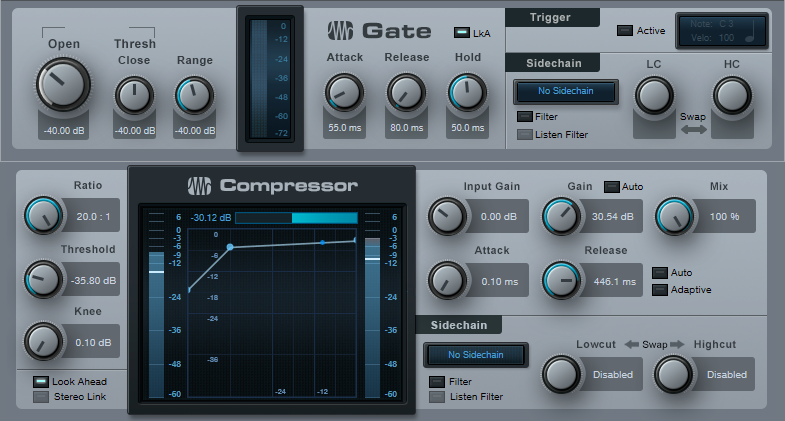 The compression aspect is pretty straightforward. A sustainer is all about a high compression ratio and low threshold, which are set to 20:1 and -35 dB, respectively. The sharp knee keeps the sustain going as long as possible, and a short attack time clamps down the attack. The release time isn’t too critical, although this depends on your playing style; a relatively long one (300-500 ms) usually works best.

This is one of those rare instances where you don’t want to enable the compressor’s Auto or Adaptive feature, because the goal here isn’t the most natural sound—it’s an effect. However, enable Lookahead because it helps to tame the attack.

Because of the extreme amount of compression, you’ll need about 30 dB of makeup gain to compensate for the gain reduction due to compression.

And now, the secret ingredient! With most sustainers, after the release time ends, if there’s a pause between notes you’ll hear a loud “pop” when you play a new note because of the compression kicking back in. A fast attack and lookahead helps, but it’s almost impossible to avoid some kind of nasty transient. If you follow the compressor with an amp sim, the distortion will hide the pop somewhat but it can still lead to an ugly attack.

Enter the noise gate. This doesn’t just remove hum, noise, and other low-level signals from being sustained, but the 55 ms attack time (coupled with the enabled lookahead button) means that when you hit a note after a pause, the note attack ramps up more slowly, so the compressor can “grab” the note without creating a pop (or if it does, the pop will be greatly reduced). If there’s an amp sim involved, you’ll hear a cleaner attack, and better overall sound. Note that depending on how fast you play and the compressor’s release time, you may need to shorten the Noise Gate’s Release and Hold times. In any event, when you want serious ssssssuuuuussssstttttaaaaaiiiiinnnnn for your single-note guitar solos, this is the ticket.