The “pumping” effect is a cool EDM staple that also works with other intense forms of music. One of the best-known examples is Eric Prydz’s seminal EDM track from 2004, “Call on Me.” Usually, this technique requires sidechaining, but with the PreSonus Compressor sidechain filter, we’re covered. The effect works best if there are some sustaining sounds with which it can work—like cymbals for drum parts, or pads if you want to pump a non-drum track. Listen to the audio example to hear how the pumping effect alters a drum track.

To start, let’s try pumping some drums. Insert the Compressor in the track, and click on the Compressor’s Filter and Listen Filter buttons. To have the kick create the signal that provides the pumping, set the Lowcut frequency to off, and lower the Highcut filter until you hear pretty much nothing but kick. Once you’ve isolated the kick (or snare, or whatever you want to isolate), turn off Listen Filter but leave Filter on.

The control settings are quite crucial; the screenshot shows some potential initial settings, but you’ll need to edit the controls based on the source audio and the desired effect. 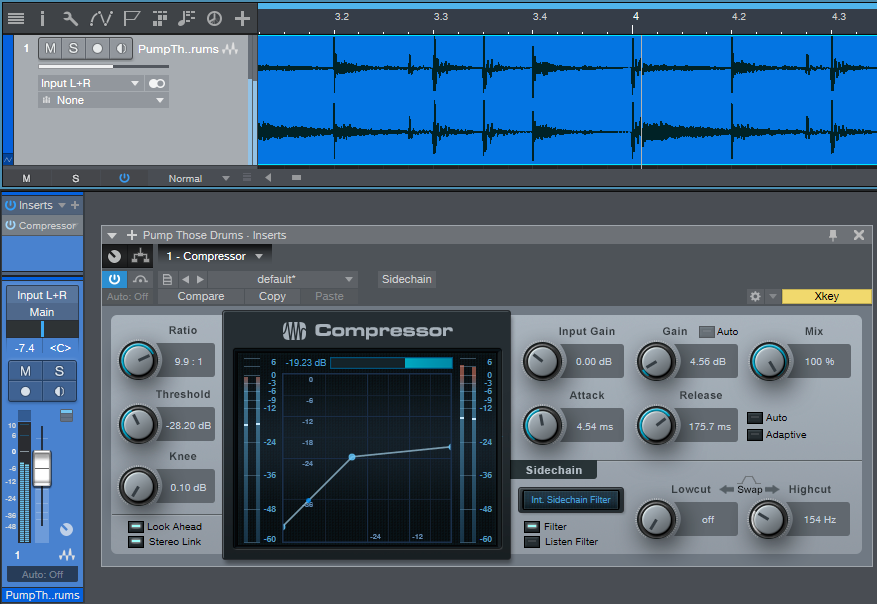 The effect’s depth, like any compression effect, depends on the Threshold and Ratio settings. For a pretty heavy-duty effect, set Threshold between -20 and -30 dB and Ratio around 10. You’ll want to tweak this depending on the program material, but it’s a good place to start.

Now for the pumping. Start with Attack at minimum, and set Release for the desired amount of pumping—you’ll probably want a time between 100 and 300 ms, depending on the song and the material. To restore some of the attack at the start of the pumping, increase the Attack time. Even a little bit, like 5 ms, restores most of the attack’s effect.

Finally, note that because this effect does in fact compress, you’ll probably want to add some makeup gain. And once you do, there you have it—the pumping sound.

Posted in Friday Tip of the Week, Studio One | Comments Off on Friday Tips: Pumping Drums—With No Sidechain!