After a recent tip on how to extract two mono tracks from a stereo track, one of the comments asked for how to convert mono into stereo. Well, we aim to please…so here’s one option.

A common way to create stereo from mono is by duplicating the track, delaying one of the tracks compared to the other, and panning them left and right. However, this approach has two problems. First, you might not want a delay. Second, when you collapse the signal back to mono, there will likely be partial cancellation due to phase differences. The method we’ll cover here not only produces stereo imaging from a mono source, but collapses perfectly to mono. It works with pretty much any instrument, but is most effective with instruments that play chords (for example, try this on acoustic guitar—it works well).

Create two buses. One of these will become the left channel, and the other, the right channel. In your mono source track, create two pre-fader sends (one for each bus). Turn down the mono source’s fader. 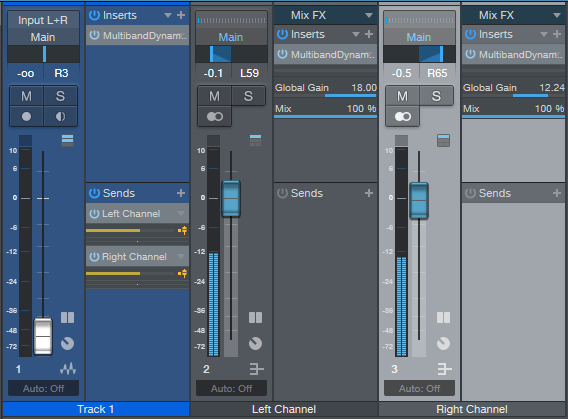 Play the track you want to convert to stereo. Solo each band in the Multiband Compressor, and adjust the frequency sliders to divide up the frequency response evenly over the five bands (the screen shot shows frequencies selected for dry electric guitar). Mute bands 1, 3, and 5. 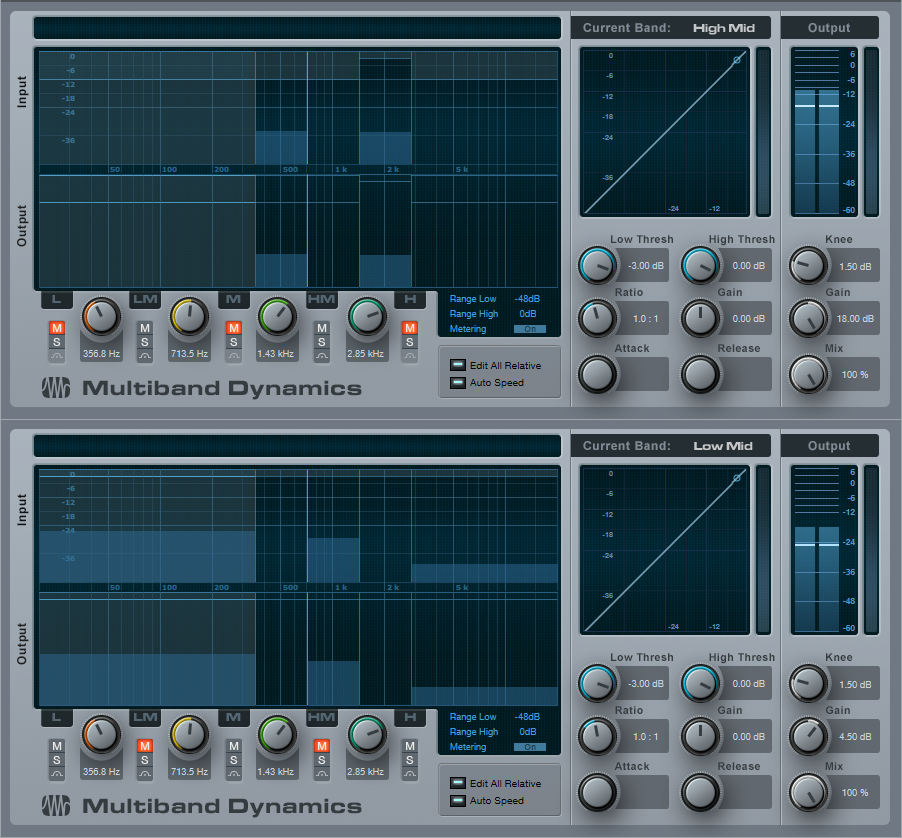 Next, drag the Multiband Dynamics into the other bus’s Inserts slot. For this bus, mute bands 2 and 4 instead of bands 1, 3, and 5, then pan the two buses left and right. Now the frequency responses are equal and opposite for the two buses. Voilà! Stereo! (Note that you probably don’t want to pan the buses too far to the left and right, because the stereo effect will be unrealistically exaggerated—as in the audio example. But it does get the point across.)

We’re not done yet, though. The levels of the two buses will be fairly low because with only two or three bands, the output level will be down quite a bit. Turning up the bus faders may be sufficient to compensate, but if not, turn up the Multiband Dynamics processors’ master Gain controls (not the per-band Gain controls). Feel free to play around with the pan and Gain controls to achieve the desired sonic balance. Also, no law says you need to mute every other band. For example, you might want a bassier sound on the left by muting the three upper bands, and a brighter sound toward the right by muting the two lower bands.

Finally, note that when you toggle the master bus from stereo to mono, the sound collapses to mono without any funky phase interactions. Done!

Posted in Friday Tip of the Week, Studio One, Uncategorized | 12 Comments