Friday Tip of the Week: The Sparkler!

Sometimes it seems that certain recorded sounds, like acoustic guitar attacks and percussion, just don’t have the “sparkle” you hear when they’re playing live. The Sparkler is a sophisticated brightening FX Chain that adds definition—without treble equalization. 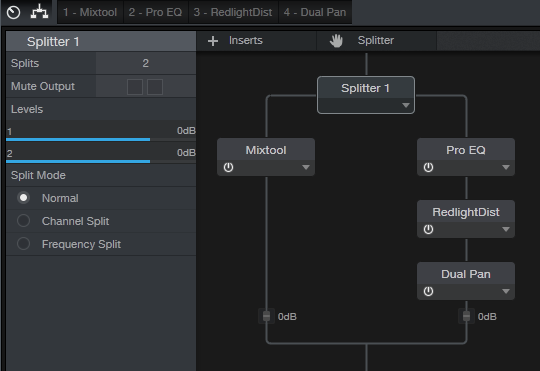 The Sparkler is a parallel effect. Referring to the FX Chain structure, a Splitter in normal mode creates a dry path through the Mixtool. This increases the level by 6 dB to compensate for the volume drop that occurs when bypassing an FX Chain where one of the splits contributes no significant level. The other split goes to the Sparkler effect, which consists of the Pro EQ, Redlight Dist, and Dual Pan. 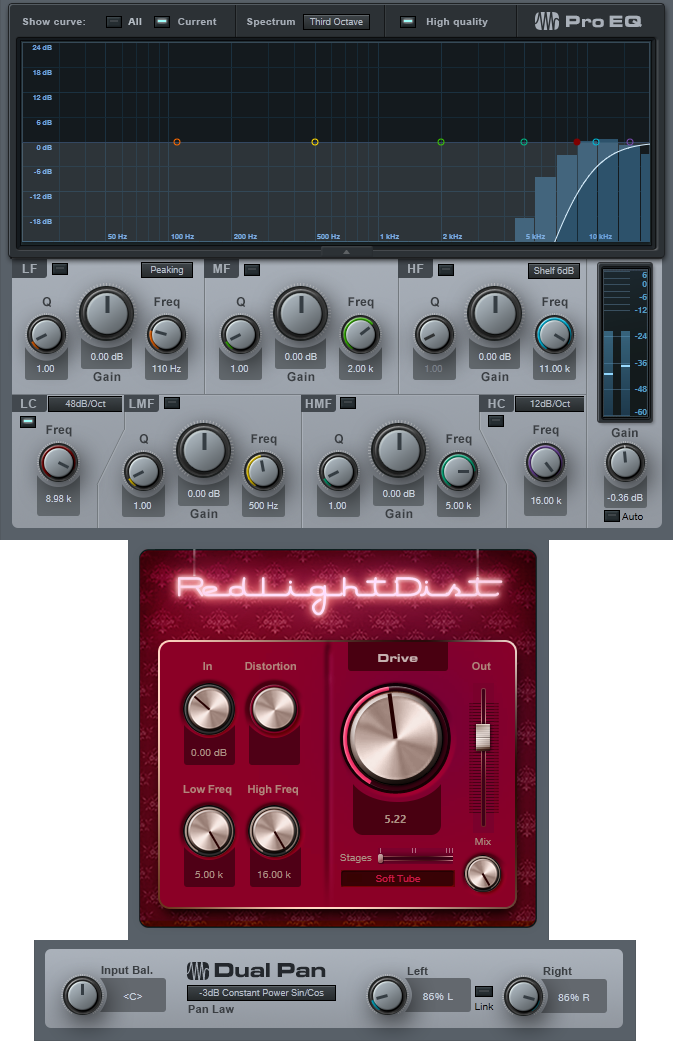 How it works. First, the signal goes through the Pro EQ, set for a steep (48 dB/octave) high-pass filter that leaves only the very highest frequencies intact. The Low Cutoff control varies the cutoff from 7.6 kHz to 12.5 kHz. The Redlight Dist synthesizes harmonics from those high frequencies. (Even though it has a High Freq control, that’s not drastic enough a cutoff—hence the Pro EQ.) The Soft/Hard control chooses between 1 or 2 distortion stages; stage 1 is my preference because it sounds more natural, but people with anger management issues might prefer 2 stages, which gives a nastier, more aggressive sound. 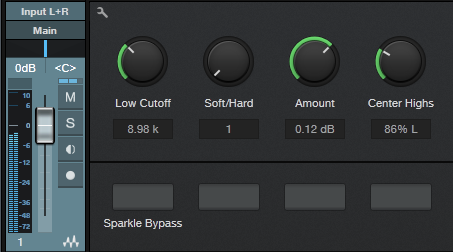 The Amount control sets the Redlight Dist output, which determines how much Sparkle gets added in parallel with the main signal. Use the Sparkle Bypass button to compare the sound with and without the Sparkle effect.

The reason for the Dual Pan module requires some explanation. The Sparkle FX Chain is intended for individual tracks, buses, and even master mixes when used subtly. Highs are very directional, so if with a bus or master there’s a trebly instrument mixed off to one side, like tambourine, the Sparkle effect can “tilt” the image toward the channel with more highs. The Center Highs control, when turned clockwise, brings the Left and Right “sparkle” channels more to center until when fully clockwise, the highs for both channels are centered.

Applying the Sparkle. To learn that the Sparkle effect does, it’s best to listen to the effect by itself and manipulate the controls to hear the results. Unfortunately you can’t assign FX Chain controls to Splitter parameters, so if you want to hear the Sparkle sound in isolation, go into the FX Chain and bring down the post-Mixtool level control all the way. As you tweak the Sparkle sound in isolation, grab only the highest audible frequencies, and avoid harsh distortion—you want just a hint of breakup, and only at the highest frequencies.

When using the Sparkle effect in context with a track of bus, start with the Amount control at minimum, and bring it up slowly. Use the Bypass button for a reality check—you want just a subtle brightening, not highs that hit you over the head and make dogs run away in panic. It takes a little effort to master what this effect can do, and it’s not something you want to use all the time. But when used properly, it can really add—well, sparkle—to tracks that need it.