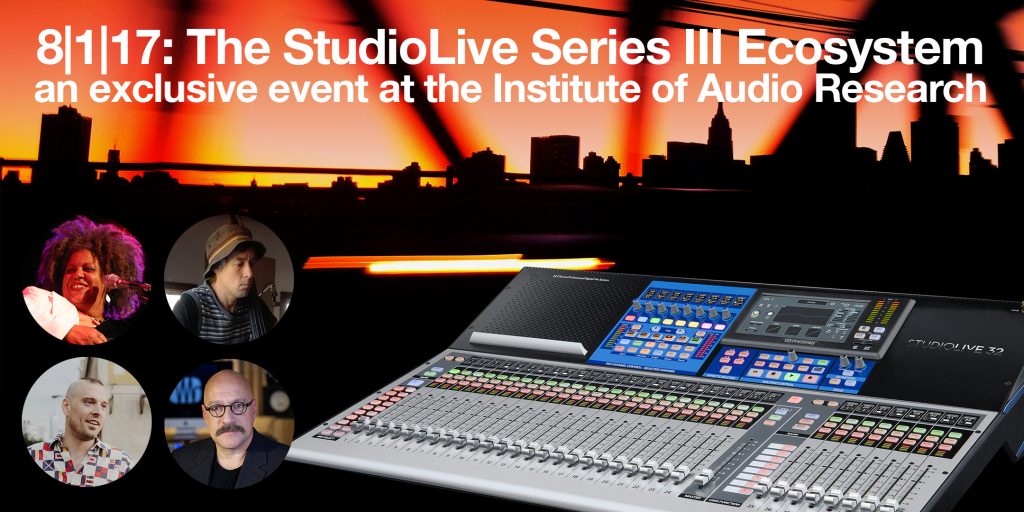 Studiolive owners in the New York area—this one’s for you! Come and join us at this exclusive, free event. Space is VERY limited (40 people tops) so get your ticket via the form below!

John Tendy will showcase the latest in PreSonus’ StudioLive Ecosystem, which includes the new Series III Mixers, StudioOne and the AIR and ULT Loudspeakers. John will demonstrate how each component works together to give musicians, engineers, and producers the ultimate live and studio recording experience. Urban folk & jazz artist KJ Denhert and her band will be the musical guests.

John Tendy is the owner of TendyMedia, a production service that specializes in filming and multi-tracking of acoustic musical ensembles at live venues and in-house. In addition to producing, John has experience in film editing, musical composition, stage direction, comedy writing and voice-over work. As a television composer, he has written national spots for Disney, ATT, Mattel, White Castle, Sonic and more. John works nightly as a jazz and saxophonist, klezmer clarinetist, has performed on Broadway and can be seen regularly with his jazz trio at the historic Showmans Jazz in Harlem, NY.

KJ Denhert’s special blend of urban folk & jazz has earned her seven Independent Music Award nominations, was named as one of Jazz.com’s top female vocalists and in 2012 was the grand prize winner in the John Lennon Songwriting Contest. KJ has been the artist in residence 11 times at Italy’s Umbria Jazz Festival. She has appeared at scores of festivals and has residencies at the ’55 Bar, Smoke in NYC, the Baz Bar in St. Barth’s, and the prestigious Umbria Jazz Festival in Italy. KJ’s talents have taken her all over the world, including St Barthelemy in the French West Indies, where she has had a winter residency at the popular Baz Bar for nearly a decade. Consistently praised for her pathos, originality and impeccable musicianship, KJ is a one-of-a-kind songwriter, guitarist and performer, not to be missed. She stays relevant to blues, jazz, singer songwriter and folk music, winning awards in all categories and I currently recording a new CD, due for release in fall of 2017.

NYC bassist Jesse Murphy is described by Bass Musician as a “classically trained bassist-turned-Fender-ninja”. Murphy played with John Scofield on his CD, “Uberjam” and enjoyed a stint with Me’Shell Ndgeocello. His work on the title track of the Brazilian Girls’ “Talk to the Bomb” is nothing short of astonishing and his unique style has been described as a combination of James Brown and avant-garde chamber music. Jesse is also a member of the “Love Trio”, a band that sprang directly out of the Nublu Club scene in NYC.

Verve recording artist, percussionist and drummer Aaron Johnston is best-known for being the polyrhythmic heartbeat and producer of the Grammy-nominated band Brazilian Girls, A “remarkably fluid drummer,” as the New York Times has dubbed him, Aaron’s skills have as a writer, produce and engineer have made him one of Latin and American music’s most sought after collaborators. The Brazilian Girls have released three albums on Universal Verve Records, garnering a Grammy nomination for Best Electronic Dance Album, critical acclaim from Rolling Stone and SPIN, tour dates with Sting and festival slots from Bumbershoot to Bonarroo, Coachella and Lollapalooza. In addition to his percussion work, Johnston has contributed to a number of film scores, including Paramount’s OKA Amerikee, a film based on the music of the Bayaka tribe in Africa. Aaron was featured in the May 2017 issue of Modern Drummer.