Time to Get Reel—Softube Tape for Studio One now Available 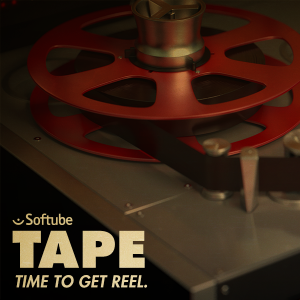 Time to get reel! Tape is now available at shop.presonus.com

Softube’s Tape plug-in adds cohesion and weight to your mixes. But Tape goes far beyond your average tape machine emulation. It includes three distinctly different tape machine types, and it offers the ease of use and low CPU strain that today’s music creators rightfully expect.

Even in this day and age, it’s common practice for computer-based professional studios to run their mixes through at least one generation of analog tape. Why? Because even when used subtly, analog tape has a smoothing effect and adds cohesion and weight to a mix—it takes the recording from a collection of individual tracks into a song where everything is connected and works together. With Softube’s Tape plug-in, you can have all that and more.

Three Machines in One

Tape includes three different tape machine types in one plug-in. Type A is based on a classic Swiss high-end reel-to-reel machine, known and loved for its precision and linearity. Type B is much more colorful—it’s a transformer based machine which adds extra weight and cream to the low end. Lastly, Type C is based on a British tape machine with a distinct vintage vibe.

Select your favorite tape machine Type, and adjust the Amount knob to taste. In most cases, that’s all you need to do to soak your tracks in analog tape sweetness. Easier still, load up one of the included presets, made by award winning engineers such as Joe Chiccarelli (Beck, U2, Strokes) and Howard Willing (Smashing Pumpkins, Sheryl Crow, Kris Kristofferson).

Feeling tweaky? Why not start by trying the different tape speed settings—you’ll find that the slower the tape speed, the more pronounced is the so-called tape head bump, which adds low end to the mix. Or open the Remote Control panel where you can control the selected tape machine’s speed stability, crosstalk amount and several other tape-a-licious features.

Add a single instance of Tape on your master bus to emulate what most computer based studios do today—mix in the computer, then mix down to a stereo tape machine—or go vintage style by adding Tape to every single track in your mix. Yes, your computer will be able to handle it. As most Softube plug-ins, Tape is uniquely light on your computer’s processor.

Extras for Studio One Users

If you run PreSonus Studio One, you can not only use Tape as a standard plug-in—Adding Tape to your MixFX slot gives you Tape Multitrack. Tape Multitrack includes all the goodies of Tape, but in addition, you get selectable crosstalk between each individual track—and you can easily control the Tape Multitrack settings from a single interface. The Tape and Tape Multitrack license is one and the same. This means that if you’re not a Studio One user but at some future point decide to switch to it, you will already have Tape Multitrack installed, licensed and ready to go.