Check out the latest Add-ons for Studio One: Music City Drums’ Biscuits and Gravy!

Biscuits and Gravy gives you raw and essential rhythms that can be applied in virtually any genre.  The loops feature five drum setups consisting of both vintage and modern equipment, from Yahama to Rogers to obscure one-of-a-kind drums that you’ll only find in a true drum connoisseur’s collection. One setup features a lo-fi channel that is a mono sum of the kit sent out to a eurorack modular effect system to add some grit and character. 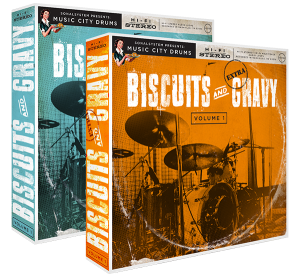 Meticulously recorded, delicately produced, and packed full of flavor in Nashville, Tennessee, these audio loops were specifically recorded with both character and attitude set to inspire and move you without the limitation of genres. Inside you’ll find a variety of grooves with that punch and feel you’ve been looking for.