A Cubase User, a Logic User, and a Digital Performer user Find Common Ground in Studio One

[We recently came across a great story—three different producers, all of whom use different DAWs, needed to collaborate on a single project. They decided that Studio One offered them the best of all three worlds, and chose it for their collaborative effort. Details below courtesy of Roger Hooper, Robert Holmes, and George Napier.] 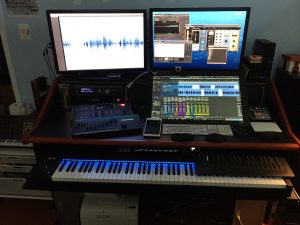 George Napier kicks things off by describing the task at hand, as well as the backgrounds of the collaborators.

“Robert, Roger, and I took a group of 11 executives from a 75-person tech startup into Studio A of Omega Studios for two days of team building. We needed to prepare backing tracks and beds for them to play against. Roger is a film composer, former Logic guy and current Mac-based Cubase user. Robert is a musician and games music composer and a 20 year die hard Digital Performer user who switched to Windows on DP and was not liking the experience,” says George. “I’m a composer/sound designer and a bit of a serial monogamist when it comes to DAWs. I’ve used Studio One since version 1, left it for Logic/Cubase at 2.6, and came back to try it out with the release of 3 (all on Mac). FYI: We all work together on projects for each other’s companies. This particular project was done under Robert’s company ResonantClarity.

“The deadline was tight, and we needed a single DAW we could all use to develop the pre-work backing tracks and the final post studio mixes,” continues Napier. “and of course it had to work on Mac and PC. When I showed Robert Studio One he liked it, and by the end of the project it became and is now his primary DAW. Since Robert and I were using Studio One, when we brought Roger into the project, he downloaded the 30-day trial to work with us. Once Roger was on board with Studio One, we were 100% compatible across platforms and worked seamlessly together to finish the project on that really tight deadline. Roger end up liking Studio One so much in fact, he added it to his permanent arsenal.”
Napier has been with Studio One from the get-go.
“I think I had been using Digital Performer for a while when I tried out a demo of Studio One in early 2010. I fell in love with the drag and drop workflow and I couldn’t believe how efficient of a VI host it was and that I could use AUs and VSTs! I used it quite exclusively over the first few years but later switched to Cubase and Logic around version 2.6. But when Studio One 3 was announced, I was blown away.  I remember watching the announcement live on the web and repeatedly picking my jaw up from my desk. I immediately bought it and started working with it again, and have ever since.
Napier is quick to describe why he came home to Studio One.
“The GUI changes are pretty much what I hoped for, the new Mai Tai, extended FX chains, and multi instrument are great, the scratchpad is really innovative,” he asserts. “I do a lot of stuff in the box, so my DAW has to be an efficient VI host, with an efficient production workflow. In my experience, Studio One is one of the best ones out there. It’s also a more focused creative experience. There’s not a lot of menus, submenus, dialogue boxes, etc. getting in the way. The stuff you need is pretty much right in front of you or just a right-click away. I love it when the software gets out of the way.”

Roger Hooper is a longtime Cubase and Logic user who was new to Studio One for this collaboration. His impressions and description of the collaborative workflow follow.

“I’ve been a Cubase user for many years; used Logic Pro for 18 years prior to that,” opens Hooper. “When I entered into this project with George and Robert, I composed a series of beds with Cubase. When we went into the editing phase, I created stems and put them in Studio One. After taking the beds into Omega Recording Studios to add live players, I edited some of the resulting files in Studio One. The three of us passed files back and forth to do various edits, as well as adding additional parts.”
Hooper found himself impressed with Studio One’s flexibility, particularly in regards to the easy mobility between Studio One’s Song and Project pages.
“I especially like the Start/Song/Project interface. When I’m working on cues for a client, I need to do a quick mastering version before submitting them for approval. I can do this in any program, but being able to go between the song page and the mastering page and back again to make changes is really slick. I sell my music on download only at this time, so being able to line up the mastered files in a timeline isn’t necessary for me, but its definitely a big plus for many artists who might otherwise use a competitor’s program for mastering their CD. The audio transpose and time stretch was very easy to learn, and very high quality. I had to change many of the live recorded parts to fit timing and harmonic sections of the music; Studio One did well in these tasks, and was easy to figure out. It also seems to be lighter on the CPU than other programs I’ve used.”
When prompted for user tips and tricks for Studio One, Hooper acknowledges that he’s new to the software, but found the most valuable resource to be Studio One’s robust online community.
“No user tips, but availing yourself of sites like Studio One expert, the YouTube channel from PreSonus, and various Studio One users is a great thing. Manuals aren’t always easy to digest, although PreSonus’ is very good. I used to work in music retail, and if I suggested ‘read the manual’ during a customer service call, well… that response was no good! The web has a wealth of knowledge on this program, and finding others’ perspective on how to operate it has been illuminating. Studio One seems very solid and I’m looking forward to getting to know it much better.”

Robert Holmes is a long-time Digital Performer user who made the switch to Studio One after a 20-year commitment to DP. He’s a self-proclaimed “old pop/rock studio guy from LA who ended up doing game scores in the golden age of adventure games.” 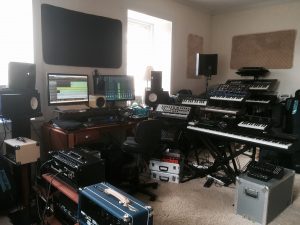 Asking Robert what he likes about Studio One begets a long response.
“I enjoy the lightness and flexibility, the direct simplicity yet high quality of the features is great. I love the drag and drop stuff, the different pages, and the small but meaningful touches like the Console Shaper, or the easy copying and input for inserts is really helpful. The importing and exporting processes are well thought out and really painless. They are all subtle things, but they add up to such an effortless dynamic that makes it easy to just sit down and get to making music quickly, which is a big priority for me. It’s just more nimble, more fluid, more no-nonsense, but the sound and the results are top tier. I’m still learning in every session, so the ability to have rollover reminders on functions and features is great! I tend to be very lazy in how I use effects, inserts, VST’s etc… I’m not always doing them in the most efficient way… but Studio One seems much more capable of bearing that load and keeping me working without locking up.”
Holmes even had a happy accident concerning Studio One’s Console Shaper.

“I had one interesting experience where I was mixing, and I was getting lots of crosstalk,” recalls Holmes. “And it was actually very cool from a sonic point of view, but it was making mixing a challenge. That’s when I discovered the Console Shaper had accidentally been activated  on the master track somehow and was in Crosstalk mode. So YES, the crosstalk really works if you want that Gold Star Studio Wall of Sound.”Despite a lengthy relationship with Digital Performer, Holmes has taken the plunge and made the switch to Studio One as a result of his experiences in this project.

“I had been a longtime Digital Performer guy, basically for the last 20 years. My pal George sent me the Studio One demo and suggested I give it a spin. As I’m a self-confessed immediacy freak with gear, the ease of entry and short learning ramp was very helpful when I had to make a quick jump from DP in the midst of a project. The similarities in workflow were helpful, yet it all was so much more fluid and responsive.

“I never looked back.”

Posted in Studio One | Comments Off on A Cubase User, a Logic User, and a Digital Performer user Find Common Ground in Studio One